17: The Dynamics of Change

The Dynamics of Change

Epidemiology and Mechanisms of Dental Disease

Epidemiology of Dental Caries in the Primary Dentition

Location of Dental Caries in the Primary Dentition

By the third birthday, the average boy is approximately 38 inches tall and weighs about 33 pounds. The average girl is slightly less than 38 inches (37.6 inches) tall and weighs about a half pound less than a boy. For the next 3 years, children average about 5 pounds of weight gain and about 4 inches of height gain per year. During this time, boys are on the whole slightly taller and heavier than girls.

There is a strong tendency for children to maintain their weights and heights during the preschool period. In other words, children who are tall or heavy at age 2 years are very likely to be regarded as tall or heavy at age 5 years also. Similarly, children who are light or short at age 2 years are likely to be regarded as light or short at age 5 years compared with their peer group.1 The correlation between the height of the child during the preschool period and his height in early adulthood is moderately good.1 It should be pointed out, however, that this is not an absolute correlation, particularly for some short individuals who may later, compared with their peers, become taller. As pointed out earlier in the discussion of growth changes from birth to age 3 years, the child’s body elongation continues to be apparent during the preschool years. During this time, head growth seems slow, whereas limb growth seems extremely rapid. In speed of change, trunk growth can be regarded as intermediate. The protuberant, pudgy abdomen of the toddling 2-year-old gradually disappears between the ages of 3 and 4 years.

A variety of other body changes take place during these critical years of development. Both the heart rate and the respiration rate slow down. Conversely, blood pressure rises. At around 4 years of age, the growth rate of the muscular system in relation to the growth rate of other tissues of the body changes significantly. Before age 4 years, the growth of the muscular system is roughly the same as the growth of the body as a whole. However, after age 4 years, because of the change in rate, approximately 75% of the child’s acquired weight during the fifth year of development is the result of muscle acquisition.2

During this preschool period of ages 3 to 6 years, those children who have natural athletic ability and those who do not become evident to some degree. During these years, the cartilage in the skeletal system is increasingly replaced by bone, and all the bones of the body become more calcified and harder. This calcification leads to an increased incidence of bone fractures.

The growth of the head and face remains continuous during the period from 3 to 6 years of age. Figure 17-1 shows that the percentage of increase in facial growth versus cranial growth becomes substantially greater around 3 years of age.3 This increased change in growth of the face compared with the cranium has important effects on a child’s appearance and craniofacial structures. In 3- to 6-year-olds, in contrast with the newborn, the face becomes larger, wider, longer, and more detailed. During this stage of life, one begins to see the effects of the eruption of permanent teeth. 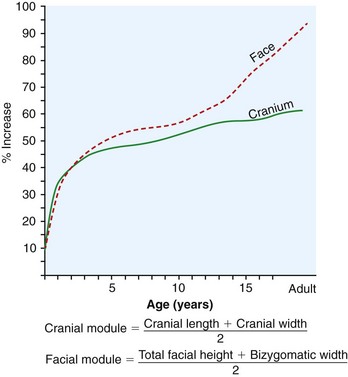 Vann and colleagues4 reported the results of a study reviewing cephalometric analysis of the primary dentition in children. They found no statistical differences between males and females (p > .01). Twelve landmarks were identified for this cephalometric analysis. In comparing 17 cephalometric norms established from a sample of 32 white children of North American ancestry with those of adults, the following conclusions based on information given in Table 17-1 were drawn:

Cephalometric Angles: A Comparison Between Preschoolers (4 to 5 Years) and Adults 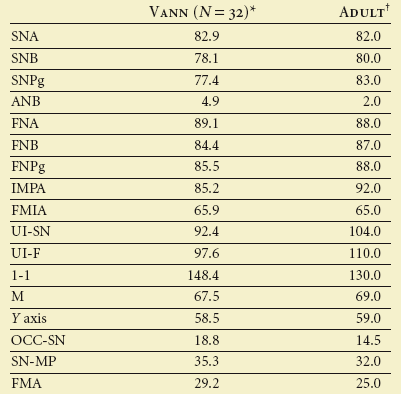 *All children in this study were between their fourth and fifth birthdays.

1. It seems that the primary incisors are more upright than the permanent incisors (in both boys and girls; compare UI-SN and UI-F in Table 17-1).

2. The similarity of angle SNA in children (82.9 degrees) and adults (82.0 degrees) supports the concept that the nasion and point A move forward in relation to the sella so that angle SNA is no different in preschool children and adults.

The soft tissue prominence of the nose and to some extent the mandible continues to increase consistently with some reduction in overall facial convexity (Figure 17-2).5 It is hard to judge the underlying skeletal configuration from the soft tissue in this age group. Vertically, there is a lowering of the palatal vault with sutural growth and apposition on the oral side of the palate and resorption on the nasal side. There is an even greater lowering of the lowest point of the chin, but the mandibular plane (lower border of the mandible) stays parallel to its original orientation. This occurs because condylar growth exceeds the vertical maxillary growth, which prevents opening of the mandibular plane angle. It is clearly wrong to think of these as latent years for growth of the face. 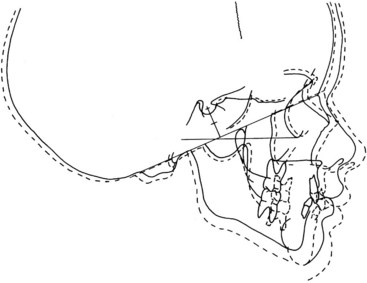 FIGURE 17-2 This anterior cranial base superimposition of the Bolton standard for 3- and 6-year-olds demonstrates the magnitude of anteroposterior and vertical skeletal growth during this period as well as the soft tissue change. (Redrawn from Broadbent BH Sr, Broadbent BH Jr, Golden WH: Bolton standards of dentofacial developmental growth, St Louis, 1975, Mosby.)

There is obviously considerable growth in the transverse direction during this time as well (Figure 17-3).5 Remember that this growth comes to an end earlier than that in other dimensions, so attention to problems in this dimension is important. Transverse maxillary growth during this period is largely the result of midpalatal sutural changes, whereas the growth of the body and angles of the mandible are the result of apposition and resorption (Figure 17-4). 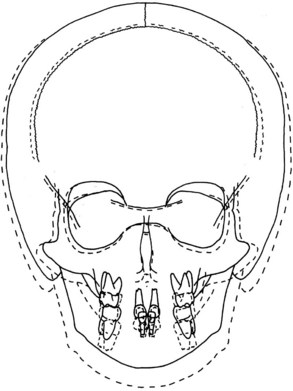 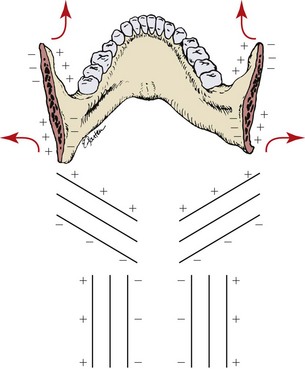 FIGURE 17-4 Cross-section through the rami and coronoid processes, illustrating how these areas of the mandible can be visualized as following the V principle. (Modified from Ranly DM: A synopsis of craniofacial growth. New York, 1980, Appleton-Century-Crofts. Data from Enlow DH, Harris DB: A study of the postnatal growth of the human mandible, Am J Orthod 50:25, 1964.)

Consistent with eruption of the new permanent teeth is the continued eruption of the primary teeth (Figure 17-5). Often the magnitude of this vertical change is unappreciated. It is also obvious that the permanent anterior teeth will occupy a more anterior and protrusive position in the face. 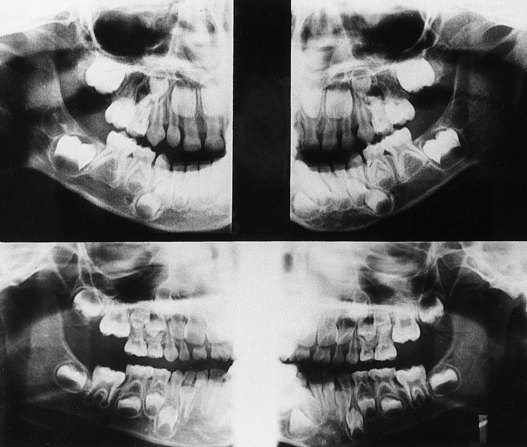 FIGURE 17-5 These two panoramic radiographs show the transition of the dentition beginning and the alteration in arch length required for accommodation of the permanent teeth.

Table 12-5 presents a chronology of human dentition. This table demonstrates that the entire primary dentition has completed root development by 3 years of age. This is a relatively stable period clinically for the primary dentition, which was very active before its eruption was completed by 24 to 36 months and before root formation was completed by age 3 years. However, this is a significant period of time for the development of the clinical crowns of the permanent dentition and their subsequent eruption. There will also be some root resorption of the primary incisors for most children during the last 6 months of this period. 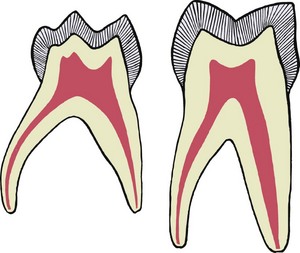 1. The crowns of primary anterior teeth are wider mesiodistally in comparison with their cervicoincisal length than are the crowns of the permanent teeth.

2. The roots of the primary anterior teeth are narrower mesiodistally. Narrow roots with wide crowns present a morphologic appearance at the cervical third of crown and root that differs markedly from that of the permanent anterior teeth. When the teeth are examined from the mesial or distal aspects, a similar situation in the root and crown measurement at the cervix is observed. The cervical ridge of enamel at the cervical third of the crown, labially and lingually, is much more prominent in the primary teeth than in the permanent teeth.

3. The crowns and roots of the primary molars are more slender mesiodistally at the cervical third than those of the permanent molars.

4. The cervical ridge buccally on the primary molars is much more pronounced, especially on both the maxillary and mandibular first molars.