Role of the Individual Practitioner

Barriers to Care for Infants and Toddlers from Low-Income Families

The Challenge of Adolescence 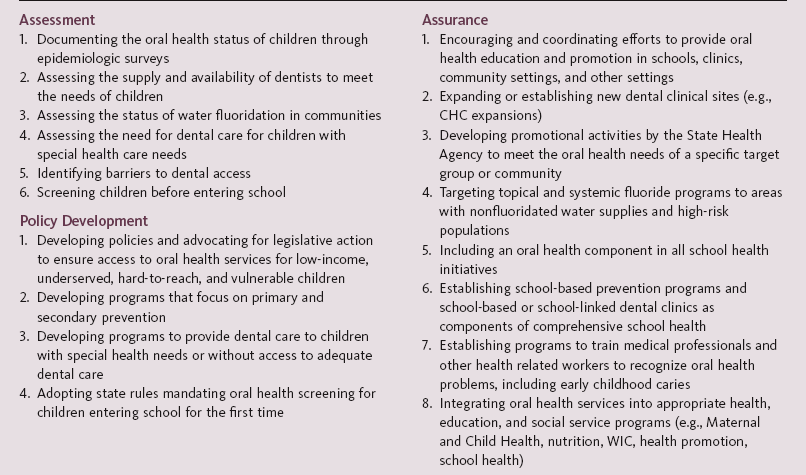 Role of the Individual Practitioner

It is important for the individual practitioner to understand that the oral health status and needs of children receiving care in a private practice setting may not represent the status and needs of all children in the community. The challenge for dentists, therefore, is to look beyond the individual dental office and make a broad assessment of their community’s needs while assessing their own role in enhancing the oral health of the entire community.

The Association of State and Territorial Dental Directors (ASTDD) developed and disseminated a needs assessment model last revised in 2003, designed to help communities identify and address their oral health needs.3,4 This model is known as the ASTDD Seven-Step Model (Figure 11-1). It provides a straightforward approach for identifying the oral health needs of a community and for designing a program to meet these needs based on available resources. Historically, needs assessments have relied on findings from intraoral examinations, which are typically expensive and time consuming to conduct. The ASTDD model provides an alternative for assessing needs that is more economical and utilizes existing resources and data when available. A community-based needs assessment will also provide an excellent opportunity to educate a community about the importance of oral health.4 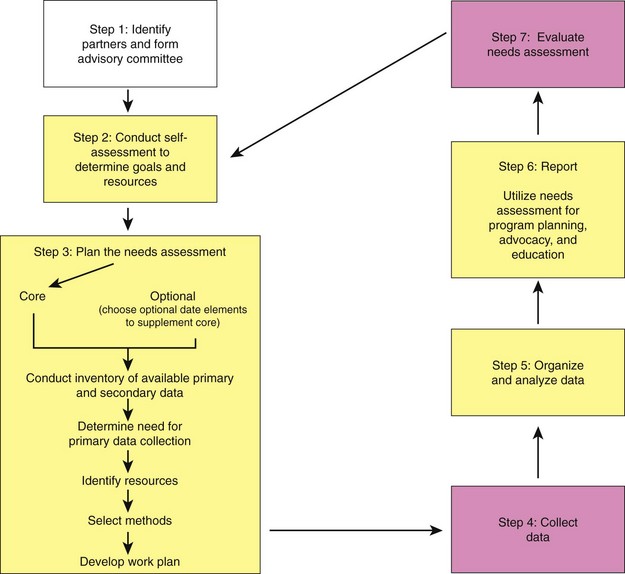 In addition to participating in needs assessment activities, practitioners are often called on to participate in other public health activities, including advocating fluoridation of community water supplies, participating in school and community health promotion activities, advocating for physicians to be reimbursed for the application of fluoride varnish for at-risk children, and advising policy makers regarding dental care programs including Medicaid. Support and guidance for the individual practitioner becoming involved in dental public health activities can be sought from a variety of sources, including the oral health components of state public health agencies, county boards of health, medical societies, and various community boards and organizations.

One important issue practitioners often find themselves involved with is enhancing access to dental care for members of their communities. This topic is discussed in the following sections.

Although regular dental care contributes substantially to healthy mouths for millions of children, a significant number of children and adults have serious problems receiving the care they need. These children are most often from low-income or minority families, and unfortunately these groups tend to experience more oral disease than other children.5-7 Some of the factors that can limit access to dental care for these children are (1) lack of finances (including lack of third-party coverage), (2) lack of transportation and geographic isolation, (3) language and cultural barriers, and (4) availability of dental providers who accept Medicaid.

Another major factor that limits use of dental services is lack of perceived need for care and low oral health literacy. Although financial, cultural, behavioral, and biological factors are among the major determinants of oral health, literacy skills are hypothesized to contribute to oral health outcomes. Oral health literacy is defined as “the degree to which individuals have the capacity to obtain, process, and understand basic oral health information and services needed to make appropriate health decisions.”8 Individual patient skills, the provider’s ability to communicate effectively and accurately, and the informational demands placed on patients by health care systems impact health literacy. Low health literacy has been linked to poor health outcomes, lower use of preventive services, increased use of hospital emergency rooms, and higher health care costs.

Historically, financial limitations have been among the most formidable barriers for low-income children in receiving health care. In 1965, the federal government attempted to reduce these financial barriers by creating the Medicaid program (Title 19), which pays for medical and dental care for eligible low-income children. Adult dental coverage under Medicaid is optional, and covered services vary widely from state to state. However, coverage for child dental services is mandatory because of a 1968 amendment to the Medicaid program creating the Early and Periodic Screening, Diagnostic and Treatment (EPSDT) program.9 The purpose of the EPSDT program is to identify the health problems of children as early as possible and to provide comprehensive preventive and remedial care.

Since 1965, the Medicaid program has been the primary public insurance program for the financing of dental services for low-income children in the United States. Most children below the poverty level who receive dental care do so through the Medicaid (Title 19) program.10 In 1997, the State Children’s Health Insurance Program (SCHIP) was started to expand public insurance to children in families with incomes too high to qualify for Medicaid; the program is now simply known as the CHIP program.11 As of 2006, states have chosen to cover children in their CHIP program either through an expansion of their existing Medicaid program (11 states), a separate child health program (18 states), or a combination of the two (21 states).12

Although Medicaid and CHIP have been successful in improving access to dental services for some, in 1996 a report from the Inspector General of the U.S. Department of Health and Human Services indicated that only one in five Medicaid-eligible children receive any dental services annually.13 One of the biggest barriers to dental care is the lack of dentists willing to accept Medicaid-enrolled children. Rates of participation vary by state and by the definition of participation. Since the Inspector General’s report in 1996, improvements in the provision of dental care to children enrolled in Medicaid have occurred. The most substantial improvements in access occurred between 2001 and 2008. In 2001, 27% of children accessed dental services; whereas in 2008, 36% of Medicaid-enrolled children accessed dental services. Though this was a substantial increase, it still means roughly two thirds of Medicaid children did not access dental services in 2008. One concern though is that a growing trend toward Medicaid managed care may result in decreased access. The Government Accountability Office reports that states with Medicaid Managed Care dental programs have much lower levels of children receiving dental services than those states that continue with traditional fee-for-service Medicaid.14

The most common reason cited by dentists for their lack of participation in Medicaid was the low reimbursement rates.15 Other nonfinancial issues, however, were important as well. For example, in a study from Iowa, although dentists were more likely to rank low fees as the most important problem, more dentists said that broken appointments were a more important problem in their practice than low fees.16 Dentists who were less busy and those who believed that dentists have an ethical obligation to treat Medicaid enrollees were most likely to be accepting all new Medicaid patients in their practice. A number of states have increased reimbursement rates to try and improve dentists’ acceptance of Medicaid enrollees. Several other states have been forced to raise Medicaid reimbursement rates after being successfully sued because of poor access to dental care. Michigan chose a different approach and improved dentist participation in Medicaid by “carving out” the dental portion of their Medicaid program in 39 counties to Delta Dental of Michigan to remove the stigma that Medicaid has among dentists and increase reimbursement rates. By 2007, there had been 27 lawsuits in 21 jurisdictions aimed at improving reimbursement rates for dental services in Medicaid.17

However, as of 2011, states face a new challenge because of the troubled U.S. economy. Combined with increasing enrollment in Medicaid and declining federal matching dollars to states, many state legislatures are reducing reimbursement rates for dental care for children and eliminating adult dental services to balance state budgets. These fee reductions for children may result in declining provider participation. Currently, in the 50 states and the District of Columbia, 7 Medicaid programs offer no dental services for adults, 15 offer emergency dental care only, 15 offer limited coverage, and the remaining 14 offer comprehensive services.18 Reducing or eliminating dental services for adults may result in an increase in modeling of poor behavior for children, and evidence clearly shows parental oral health status impacts that of their children.19 As well, in 2011 the Obama administration sided with states in opposing lawsuits against cuts in Medicaid rates that could result in further reductions in access for children and their parents/guardians.20

As part of his “Great Society” plan to eliminate poverty, President Lyndon Johnson funded eight neighborhood health centers in 1965. This neighborhood health center concept has continued to develop and expand through the years and has evolved into a nationwide network of roughly 1200 federally qualified health centers (FQHCs), which includes Community Health Centers, Migrant Health Centers, Health Care for the Homeless programs, and public housing primary care programs. The mission of these centers is to increase access to affordable health care services for low-income families. FQHCs are located throughout the country in areas where barriers limit access to primary health care for a significant portion of the population. These barriers can be economic, geographic, and/or cultural. FQHCs provide primary and preventive health care services including dental care in many centers.

Fiscal year (FY) 2010 collections for FQHCs were $7.5 billion. Program statistics from the 2010 Uniform Data System (UDS) for that same year were as follows21:

The role of FQHCs in the provision of oral health care for individuals who would otherwise not be able to access or afford care will likely increase in years to come.

This textbook is organized by children’s developmental stages. It works/>