Modern orthodontics is based in the main on the work of two people, Edward Angle, whose classification of malocclusion is universally used, and Lawrence Andrews, whose ‘six keys to occlusion’ re-defined Angle’s work.

A person’s appearance is important to them, as is the need to conform to what is regarded as normal within their culture. A dental appearance that is outside of what is felt to be normal may lead to a feeling of low self-esteem. Treatment of a patient with a malocclusion that is causing them to experience low self-esteem will give greater confidence and a feeling of well-being about their dental appearance.

A malocclusion may interfere with the correct function of speech. The most common problem is the pronunciation of the letter ‘S’.

Overcrowding of the teeth may lead to caries due to the inability to keep the teeth clean in an effective way.

This can happen if the bone of the palatal vault does not respond to the movement of, for example, an incisor, and therefore acts to restrict its movement; this may then lead to resorption of the incisor apex instead of the bone.

If too great a force is applied to a tooth, the blood capillaries are occluded and cells in the periodontal ligament die. This area is then structureless or ‘hyalinised’ The hyaline material consists of compressed collagen.

When fixed appliances are removed, sometimes white spot lesions are noted in the enamel of the tooth underneath where the bracket was bonded; these are due to decalcification of the enamel.

The soft tissues can be injured and painful and sore areas can occur under wires or the baseplate of an appliance. However, these problems are generally dealt with fairly easily.

Known as the ‘father of orthodontics’, the American orthodontist Edward Hartley Angle (1855–1930) produced a classification for the different forms of malocclusion. 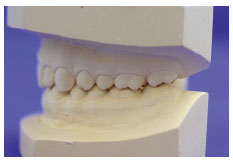 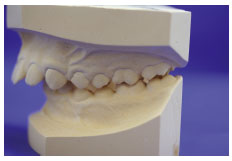 Division 1: The maxillary incisors are proclined, giving rise to a ‘buck-toothed’ appearance (Figure 5.2.2). 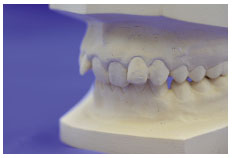 Division 2: The upper centrals are proclined and the upper laterals are retroclined; there is also a deep overbite associated with this division (Figure 5.2.3).

Where there is no skeletal discrepancy but the upper incisors are very proclined the use of a removable appliance can achieve very good results. However, where the overjet is because of a skeletal problem, functional appliance therapy is usually needed followed by a course of fixed appliance treatment. 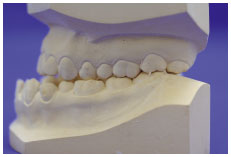 (1) Molar relationship: the distal surface of the disto-buccal cusp of the upper first permanent molar occludes with the mesial surface of the mesio-buccal cusp of the lower second permanent molar.
(2) Crown angulation (mesio-distal tip): the gingival portion of each crown is distal to the incisal portion and varied with each tooth type.
(3) Crown inclination (labio-lingual, bucco-lingual): anterior teeth should be at a sufficient angulation to prevent over-eruption. The upper posterior teeth should have a constant lingual tip, that is similar from the canines to the second premolars and then increased in the molars. In the lower posterior teeth, the lingual tip increases progressively from the canines to the molar.
(4) No rotations.
(5) No spaces.
(6) Flat occlusal planes.

Orthodontic treatment falls into one of two areas: ‘camouflage’ and ‘modification’. Treatment goals have to be decided on early and may possibly be a compromise between the patient’s most favoured outcome which might purely be one of aesthetics where as an orthodontist may wish to achieve perfect occlusion.

Designing orthodontic appliances is a team exercise involving the orthodontist and technician. In order to do so, the technician should understand the concepts of anchorage, retention and tooth movement.

When force is applied to the crown of a tooth it will move slightly within the surrounding periodontal ligament. Then, because of the areas of compression that have been set up, the tooth will move to a new position in the mouth if the force is applied over a sufficient length of time. There are three kinds of movement that one can expect: tipping, bodily movement and rotation about the long axis. Tipping of a tooth is the only kind of movement that a removable appliance can achieve, bodily moving a tooth is only possible with fixed appliances and rotations can be achieved with removable appliances if managed closely.

A removable appliance is one that can be easily removed from the mouth, however, this does not mean that they are for part-time wear.

The use of removable orthodontic appliances has fallen due to the limited range of movements that can be achieved with them and consequently the popularity offixed appliance therapies. But they are still required in the form of retainers and functional appliances used in combination with fixed appliance therapy. In addition, they can be used for simple movements such as tipping a tooth, which are easily achieved with them.

Anchorage is an important consideration when moving teeth and should not be confused with retention (how an appliance is held in the mouth). Anchorage is the resistance to movement by the teeth when an orthodontic force is applied.

Incorrect provision of anchorage for an appliance will allow the tooth that is being moved to stay where it is, and the ‘anchoring’ teeth to move.

Removable appliances often rely on intra-maxillary traction, where anchorage is obtained from within the same arch. Reciprocal anchorage is also possible, i.e. the force of movement of two teeth, or groups of teeth, cancels each other out. A simple example is that of closing a diastema. Other than in these cases, the reactionary force generated to move a tooth is distributed to other teeth such that they can resist movement.

The term retention is used in orthodontics to mean two things:

A removable appliance is held in the mouth in two ways. Firstly, by using clasps in tooth undercuts and, secondly, by means of the baseplate which may also use undercut areas on the palatal aspect of the teeth and in the same way as a denture, use the close fit of the plate and saliva on the palate to create cohesion between the appliance.

Maintaining teeth in their new position is carried out using retainers. Either Hawley or Essix-type retainers can be used and do the job equally well. Essix-type retainers are worn for much less time, generally at night; and as they are virtually invisible when in place they are becoming increasingly popular.

A number of basic bends are used in the construction of orthodontic appliances.

The pliers should only be used as a vice to grip the wire; nearly all wire bending is done with the thumb and index finger.

You will need:
Work safety
Safety glasses should be worn when handling orthodontic wires.

Most wire is supplied on reels, therefore once a length of wire has been cut, it will have a pronounced curve. In most cases the wire will require straightening before a component can be made.

When forming soft curves the wire does not require straightening; the curve that is already present can be exaggerated to help form the curve. This is done for components such as the labial bow.

(1) Hold the wire in both hands and bend the ends towards each other.
(2) Alternatively use one hand to increase the curve by ‘squashing’ the wire between the fingers and the thumb (Figure 5.4.4).

These types of bend are demanding on your fingers and require a firm grip on the pliers.

To make coils and loops, found in springs and labial bows, ‘spring-forming’ pliers must be used. Making uniform coils and loops take practice but are simple once the technique has been mastered. The wire should be bent around the conical beak of the spring-forming pliers and constantly moved so that the square beak does not hinder the process.

Ball-ended clasps are quick and easy to make. They are bought pre-formed so just need fitting to the model. The ball end fits low down in between two teeth and rests on the gingival margin.

You will need:
Work safety
Safety glasses should be worn when handling orthodontic wires.
Basic procedure
1. Hold the ball in the pliers and make a right-angled bend as close to the ball as possible.
2. Place the ball in between the teeth where the clasp is to be positioned so that the long wire part of the clasp rests against the contact point between the two teeth and then mark that point with the pencil.
3. From this pencil mark the wire should then be adapted to the contours of the teeth and model making sure that it is kept out of the way of the opposing model.
4. To finish the clasp on the palatal or lingual surface make a right angled bend to aid its retention in the acrylic baseplate.

Adams clasps are the most widely used clasp on removable appliances, particularly on molars and premolars (Figure 5.7.1). There are other clasps that can and sometimes are used but the Adams is the most versatile. 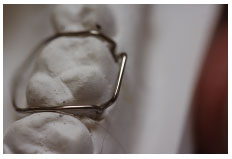 You will need:
Work safety
Safety glasses should be worn when handling orthodontic wires.
Basic procedure
1. Survey the model (by eye) to look for available undercuts.
2. If no undercut is available, ‘pockets’ should be cut into the gingival margin into which the clasp will engage.
3. Carve the pockets making sure that they are not too deep and that they follow the contour of the unerupted buccal surface of the tooth to be clasped.
4. Cut a piece of 0.7 mm wire about 10 cm long and straighten. Near the centre make a 90° bend.
5. Place this bend on the inside of one of the pockets.
6. Mark the wire where it touches the inside of the other pocket.
7. At the mark make another 90° bend in the same plane as the first. This will form the ‘bridge’ of the clasp. It must be made the correct length.
8. Check that the two bends are 90°.
9. Form the arrowheads by holding the wire so the bridge is horizontal and the two ends are vertical. Grip one of the vertical pieces with the tips of the Adams pliers, 2–3 mm from the bridge.
10. Bend the wire through 90° away from the other wire arm.
11. Continue to bend the wire down but at the same time bring it around in front of the beak of the pliers.
12. An arrowhead should now have formed-a small ‘u’ shape-and both sides must be parallel; the arrowhead must be 3–4 mm long.
13. Repeat the process for the other side so that there are two arrowheads of the same size and shape. They both must be 90° to the bridge when viewed from the buccal aspect and 45° to the bridge when viewed from the gingival aspect.
14. The two arrowheads must fit exactly into the pockets.
15. From the buccal aspect grip the mesial arrowhead in the tips of the Adams pliers just below halfway up the arrowhead-as the bend must be well below the bridge.
16. With the thumb close to the pliers bend the wire across the pliers and then pull the wire round so it is at 90° to the bridge.
17. If all the bends are in the right places and at the right angles when the clasp is placed on the tooth the mesial part will contact the tooth to be clasped and the adjacent tooth such that the rest of the clasp is at 45° to the tooth; this angle must be maintained for the clasp to function correctly.
18. Where the wire contacts the tooth it should be marked with a pencil to indicate where the next bend is be made.
19. The wire should now be fitted to follow the contour of the embrasure between the teeth-it must not be high over the occlusion.
20. When fitting the wire in the palate it must be straight (if possible) and a gap of about 0.5–1 mm must be present between it and the model.
21. Bend and cut a small right-angled bend at the end of the wire to aid retention in the baseplate.
22. Once the mesial side is done the same process is repeated with the distal side. The distal wire must be carried forward to meet the mesial wire, so the baseplate can be trimmed away from the soft palate.