Is it periodontal disease?

Other conditions affecting the periodontal tissues

No clinician is expected to be intimately familiar with all of the possible conditions that may affect the periodontal tissues to allow an instant diagnosis. From a clinical standpoint, it is much more important that a clinician be able to identify the signs to arouse suspicion so that lesions may be investigated further, typically following referral to an appropriate specialist. Further investigation will involve clinical assessment together with additional investigation that, depending on the nature of the condition and the possible diagnoses considered, may require haematological assessment and/or biopsy.

A (noncomprehensive) list of many conditions that can affect the periodontal tissues is given in < ?xml:namespace prefix = "mbp" />Table 5.1. Although this is a convenient way to learn about these different conditions, in clinical practice the features that arouse the suspicion that a patient requires further investigation for a possible nonperiodontal cause of a periodontal lesion are most important, and many of these are listed in Table 5.2. In the cases described in this chapter, emphasis is thus placed on the process of diagnosis rather than on the (sometimes very rare) diagnoses themselves.

Table 5.1 Summary of conditions that may present in or affect the periodontal tissues

Table 5.2 Clinical features that may suggest that a periodontal condition is not the result of periodontal disease

A 27-year-old male visited the dentist and complained of very sore gums, particularly in the upper teeth around the palatal region. He reported that this had started suddenly approximately 4 days earlier and that he had also felt slightly unwell and had a slightly raised body temperature. He was medically well and a smoker of approximately 15 cigarettes a day since he was 16 years old. He visited the dentist irregularly but had not previously noticed any problems from his gums, such as bleeding or pain.

On examination, he had generalized lymphadenopathy, and his gingivae appeared red and swollen. Some ulceration with a greyish slough was evident, particularly in the palatal gingivae in the upper teeth (Figure 5.1). Careful examination found no evidence of any other lesions affecting the oral mucosa. His plaque control was judged to be poor, and there was a marked halitosis. 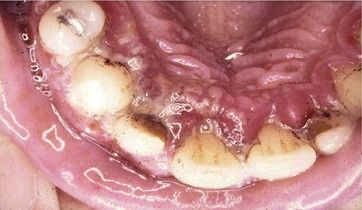 Fig 5.1 Suspected acute herpetic gingivostomatitis. The gingivae are red and inflamed, with diffuse ulceration seen at the gingival margins of the palatal aspects of the upper teeth.

After careful consideration of the clinical findings and history, a working diagnosis of acute herpetic gingivostomatitis was made. The patient was advised to take anti-inflammatory drugs, maintain fluid intake, and rest, and a follow-up appointment was scheduled in 2 weeks to assess the progress or resolution of the condition. At the 2-week follow-up, the patient reported that the condition had resolved within 3 days of his initial visit and that he was now well again and had no further oral symptoms. His plaque control was much improved, and although there were some signs of mild chronic gingivitis, there was no residual damage evident from the condition.

Distinguishing between acute herpetic gingivostomatitis and acute necrotizing ulcerative gingivitis (ANUG) can sometimes be a difficult challenge. Acute herpetic gingivostomatitis is extremely common, but ANUG is increasingly uncommon in those who are systemically healthy. Typically, with primary herpetic infection there will be other lesions affecting other parts of the oral mucosa, such as labial, buccal, and palatal mucosa, and even the dorsum of the tongue (Figure 5.2). In this case, in the absence of any other mucosal lesions, the differential diagnosis is more equivocal. First, the patient is a smoker with poor plaque control (although it is uncertain whether the plaque accumulation was largely the result of being unable to brush because of the sore gingivae), both of which are strongly associated with risk of ANUG. Systemic symptoms of pyrexia and malaise are more pronounced in primary herpetic infection and are not usually seen in patients with ANUG. Although the main sign of the condition here is the ulceration seen at the gingival margins, it does not have the typical “punched-out papilla” appearance of ANUG but, rather, is less destructive and not particularly localized to the papillae.

Fig 5.2 More typical appearance of acute herpetic gingivostomatitis. Gross redness and swelling of the gingivae, with discrete ulcers noted at the gingival margins of the lower central incisors, combined with characteristic ulcerative lesions on the labial mucosa.

In this case, the diagnosis was made by weighing the different features outlined, but it was prudent to arrange an early follow-up, which helped to confirm the diagnosis and allowed implementation of any periodontal care that might be required following the acute condition. Although it is also possible for other acute viral infections to present with similar features, these are also self-limiting, and it would not be appropriate to carry out any laboratory testing (e.g., serum antibody titres to herpes simplex virus or direct viral identification), which would not affect clinical management.

A 57-year-old woman was referred to the periodontist with persisting red and sore gums around the lower teeth, particularly for the past year. She had had repeated visits with a dental hygienist for scaling and oral hygiene instruction but had not noticed any improvement in her condition. Her medical history revealed that she was hypertensive and had been taking propranolol to control her blood pressure for the past 7 years. She was otherwise fit and well and a nonsmoker.

The clinical appearance of the lower gingivae is shown in Figure 5.3. The most striking feature is the fiery red gingivae affecting the attached gingivae and which in some places spares the marginal (free) gingivae. In addition, a l/>

Tags: Clinical Problem Solving in Periodontology and Implantology
Jan 5, 2015 | Posted by mrzezo in Implantology | Comments Off on 5: Is it periodontal disease?: Other conditions affecting the periodontal tissues
Premium Wordpress Themes by UFO Themes
WordPress theme by UFO themes