Given the microbial aetiology of periodontal diseases, it is not surprising that many different antimicrobial agents have been used in the management of periodontal disease. These agents include a range of antiseptics used for chemical plaque control and antibiotics that are used mainly as adjunctive treatments for periodontal pocketing. This chapter describes the use of both antiseptic agents and antibiotics, with particular emphasis on consideration of when antibiotics may be indicated and their potential effects.

As a microbial biofilm, mature dental plaque is inherently somewhat resistant to antimicrobial agents because they are unable to effectively penetrate deep within the plaque. Consequently, chemical plaque control agents tend to be more effective in preventing or inhibiting plaque growth rather than eliminating established plaque; similarly, antibiotic agents are used in combination with mechanical debridement of the biofilm.

A wide range of antiseptic agents have been used in toothpastes, dental gels, and mouthwashes. Many of these are listed in < ?xml:namespace prefix = "mbp" />Table 13.1. Products containing these agents are used for a variety of applications, including plaque control, oral and throat infections, and mucosal ulceration. All of these agents are effective at killing bacteria in laboratory conditions, and in general, bacterial resistance to them does not develop. However, only some of them have been shown to have significant inhibitory effects on dental plaque. The effectiveness of these agents depends particularly on their ability to persist in the oral cavity and remain active over a period of time, which is referred to as their “substantivity.”

Chlorhexidine digluconate is the most effective of all the antiseptic agents used for controlling plaque. Studies demonstrate that it is able to completely inhibit plaque growth when starting from a clean tooth. Chlorhexidine is strongly cationic and thus binds to teeth and oral mucosal surfaces, and it remains active for many hours. This excellent substantivity accounts for its high efficacy. It is mainly used as a mouthwash (0.2% w/v), but it has also been produced as a 1% dental gel, in the form of sprays, and in a toothpaste. However, it is not suitable for use in most toothpaste formulations because the detergents present inactivate the chlorhexidine. Thus, as a mouthwash, ideally it is best used after toothbrushing and thorough rinsing.

Chlorhexidine is safe for long-term use, but its main side effect is that it causes extrinsic staining, which can be troublesome and extensive, particularly if used for long periods. Therefore, it tends to be used for short periods of time from a few days to a few weeks for specific purposes rather than as a long-term adjunct to plaque control. The staining that it causes is the result of its cationic, binding properties. Occasionally, chlorhexidine can cause hypersensitivity reactions resulting in salivary gland swelling or mucositis, but these reactions are very rare. 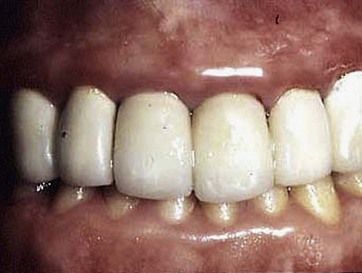 Fig 13.1 Catch-22? Severe gingival inflammation associated with poorly fitting margins of upper anterior crowns. The inflammation is unlikely to resolve while the margins are still there, but one cannot successfully remake the crowns until the inflammation has resolved. In this case, the crowns can be removed and replaced with well-fitting laboratory-made acrylic temporary crowns. To assist the gingival resolution, adjunctive use of chlorhexidine together with good plaque control measures would be appropriate.

Overall, chlorhexidine is an extremely useful and effective plaque control agent. However, it is not a substitute for proper periodontal management, including effective regular home care procedures. Its effects are also mainly limited to the supragingival flora, and there is little evidence that irrigation of pockets with it is useful.

Other antiseptic agents and plaque control

As shown in Table 13.1, a number of other antiseptics are available for routine use in oral care products to inhibit plaque, including triclosan, zinc ions, sanguinarine, and essential oils. Triclosan is widely used in toothpastes and in some mouthwashes as an antiplaque agent. In some preparations, it is formulated with a Gantrez copolymer to improve its substantivity, and in others it is used in combination with zinc ions, which enhance the antibacterial activity. In clinical studies under well-controlled conditions, these products can reduce plaque and gingivitis by approximately 30%. Essential oil mouthwashes have similar effects on plaque and gingivitis. Sanguinarine is a plant extract that also has some antiplaque effects, and it is available in toothpaste and mouthwash preparations.

Although these products are in widespread use, it is difficult to measure their effects on a population basis. Due to the size of their effect, it is unlikely that one will see a marked clinical change in a patient when switching to one of these products, which is not to say that they may not be having significant effects on plaque and gingivitis. On an epidemiological scale, it is interesting to speculate about the effect of a 30% reduction in plaque on the prevalence of periodontal disease.

In addition to antiseptics, a number of other ways of inhibiting plaque formation have been proposed, including using enzymes in toothpastes that activate salivary antibacterial mechanisms and using chemical ingredients that inhibit formation of the acquired pellicle and thus inhibit bacterial colonization and plaque growth. This latter action particularly seems to be, at least in theory, an attractive way of inhibiting plaque, but there are no products currently av/>