The most common indications for periodontal surgery are to access the root surfaces for debridement under direct vision or to carry out a resective or regenerative procedure (see < ?xml:namespace prefix = "mbp" />Chapters 10 and 12) during the treatment of periodontitis. However, there are a number of other distinct clinical situations in which periodontal surgery may also be indicated:

• If the gingiva is partly or completely covering the crown of the tooth/teeth, surgical reduction of the gingiva may be needed to facilitate oral hygiene.

• If the gingiva is partly or completely covering the crown of the tooth/teeth, surgical reduction of the gingiva may be needed to access the tooth for restoration.

• To provide adequate sound supragingival tooth tissue to ensure restoration retention, and resistance without encroaching on the biologic width.

• To address aesthetic concerns, particularly when an excess of gingiva is shown.

• To separate or remove a root from a multirooted tooth.

This chapter discusses some of the surgical procedures used to manage these conditions.

Gingival overgrowth is not an uncommon clinical finding, and there are a number of reasons why this might occur (Table 11.1). Some patients who present with gingival overgrowth would benefit from a surgical gingivectomy, which aims to excise excess gingival tissue without the removal of alveolar bone. This procedure is applicable only to patients with either excessive gingival tissue or suprabony pockets with adequate keratinized gingiva. This is traditionally carried out using a reverse bevel incision or, more commonly, an inverse bevel incision. The advantages and disadvantages are detailed in Table 11.2.

Table 11.2 Advantages and disadvantages of different flap techniques for a gingivectomy

A 36-year-old male patient presented with concern about his gums looking very swollen. Medical history revealed that he was diagnosed with hypertension 4 years ago, and he had been taking amlodipine 10 mg and bendroflumethiazide 2.5 mg per day. He reported that his “gum problem” started 1 year after initiating his medication.

The patient has been visiting his dentist regularly and has been receiving scaling without local anaesthesia every 6 months.

The attached and free gingiva were grossly overgrown and bled readily upon probing (Figure 11.1). The interdental papillae exhibited a nodular appearance, and supra- and subgingival plaque and calculus were present, particularly interdentally. The BPE score was as follows: 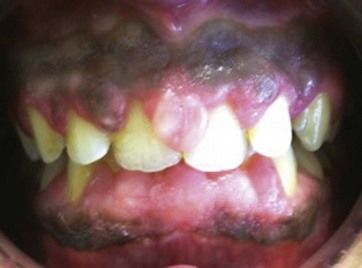 Little alveolar bone was evident on the panoramic radiograph (Figure 11.2), and a diagnosis of drug-induced gingival enlargement was made. The patient received a course of initial periodontal therapy to improve his oral hygiene and removal of plaque and calculus deposits. Following completion of this treatment, the plaque scores improved to an acceptable level; however, the gingival enlargement remained, and a surgical phase of treatment was planned. 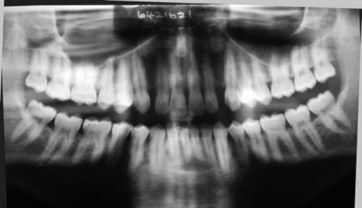 The width of gingival tissue to be removed by the combination of these incisions is preplanned by “sounding out” the underlying bone crest and ensuring that a width of keratinized gingiva of at least 3 mm remains. To remove and thin the excess gingival tissue in this case, a gingivectomy was performed using an inverse bevel incision combined with an intracrevicular incision (Figure 11.3). A third incision was performed with an Orban interdental knife along the alveolar crest in order to separate the secondary flap around the cervical area from the bone crest (Figure 11.4). The secondary flap was removed with a curette (Figure 11.5).