Following the production of a wax pattern by either the direct or indirect method (Chapter 4), the next stage in many dental procedures involves the investment of the pattern to form a mould. A sprue is attached to the pattern and the assemblage is located in a casting ring (Fig. 5.1). Investment material is poured around the wax pattern whilst still in a fluid state. When the investment sets hard, the wax and sprue former are removed by softening and/or burning out to leave a mould which can be filled with an alloy or ceramic using a casting technique.

Fig. 5.1 Diagram illustrating how an investment mould is constructed from a wax pattern. 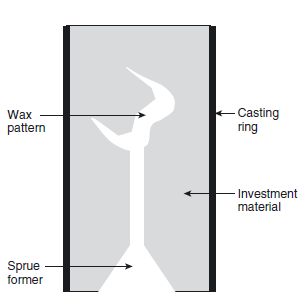 In the case of acrylic denture production the base-plate wax is invested in a two-part split mould using dental plaster or stone as the investment. Following removal of the wax the resulting mould is filled with acrylic resin.

The investment mould used for casting alloys and some castable ceramics needs to be constructed from a material which retains its integrity at the casting temperature. Unmodified dental plasters or stones are not suitable for this purpose.

Phosphate-bonded die materials are most commonly used for the construction of refractory dies and since these are similar to phosphate bonded investments they will be covered in that section.

Alloy castings undergo considerable contraction when cooling from the casting temperature to room temperature. Such contraction may result in a casting with a very poor fit, for example a simple class I inlay would be loose fitting, whereas a crown would be too small and short at the margin. One function of the investment mould is to compensate for this casting shrinkage. This is generally achieved by a combination of setting expansion during the hardening of the investment mould and thermal expansion during the heating of the mould to the casting temperature.

The investment which is best able to retain its integrity at the casting temperature and able to provide the necessary compensation for casting shrinkage is chosen.

Investment materials consist of a mixture of a refractory material, normally silica, which is capable of withstanding very high temperatures without degradation, and a binder which binds the refractory particles together. The nature of the binder characterises the material.

There are three main groups of investment material in common use. They are referred to as gypsum-bonded, silica-bonded or phosphate-bonded.

These materials are supplied as powders which are mixed with water and are composed of a mixture of silica (SiO2) and calcium sulphate hemihydrate (gypsum product) together with other minor components including powdered graphite or powdered copper and various modifiers to control setting time.

Silica is a refractory material which adequately withstands the temperatures used during casting. It is available in three allotropic forms – quartz, cristobalite and tridymite – which are all chemically identical but differ slightly in crystalline form. Quartz and cristobalite are used extensively in investments. In addition to imparting the necessary refractory properties to the investment, the silica is responsible for producing much of the expansion which is necessary to compensate for the casting shrinkage of the alloy. The expansion is accomplished by a combination of simple thermal expansion coupled with a crystalline inversion which results in a significant expansion. Quartz undergoes inversion at a temperature of 575°C from the so-called ‘low’ form or α-quartz to the so-called ‘high’ form or β-quartz. For cristobalite, conversion from the low to the high form occurs at a lower temperature of around 210°C. The expansion is probably due to a straightening of chemical bonds to form a less dense crystal structure as illustrated in Fig. 5.2. The change is reversible and both quartz and cristobalite revert back to the low form on cooling. The overall thermal expansion and inversion expansion of materials containing cristobalite is greater than those containing quartz as illustrated in Fig. 5.3.

The calcium sulphate hemihydrate is an essential component since it reacts with water to form calcium sulphate dihydrate (gypsum) which effectively binds together the refractory silica. The chemistry of setting and important properties of gypsum products are dealt with in Chapter 3. The setting expansion of the calcium sulphate dihydrate, when mixed with water, is used to partially compensate for the shrinkage of the alloy which occurs on casting. Further compensation can be achieved by employing the hygroscopic setting expansion which occurs if the investment mould is placed into water at the initial set stage. The latter method is known as the water immersion hygroscopic expansion technique and can result in an expansion of five times the normal setting expansion. Another method is the water added technique in which a measured volume of water is placed on the upper surface of the investment material within the casting ring. This produces a more readily controlled expansion. Hygroscopic expansion is further encouraged by lining the casting ring with a layer of damp asbestos which is able to feed water to a large surface area of the investment mould. The latter technique is routinely employed even when no attempt is made to maximize hygroscopic expansion by immersing in water or adding water.

The mechanism of hygroscopic expansion is not fully understood. However, it may be envisaged that water is attracted between crystals by capillary action and that the extra separation of particles causes an expansion. The magnitude of the hygroscopic setting expansion which occurs with gypsum bonded investments is greater than that which occurs with gypsum model and die materials.

Gypsum alone is not satisfactory as an investment for alloy casting since it contracts on heating as water is lost and fractures before reaching the casting temperature. The magnitude of the contraction, which occurs rapidly above 320°C, is significantly reduced in investment materials by the incorporation of sodium chloride and boric acid.

Three types of gypsum bonded investments can be identified as follows: