Endodontic therapy without radiographic diagnosis is not possible. However, today, digital techniques are increasingly replacing traditional radiographic film technology, and also offering options for three-dimensional reconstructions of teeth and bone.

Patient exposure to x-rays has been reduced considerably in recent years. In comparison with exposure from natural sources, the intraoral exposure has decreased to between 7.6 hours (Kodak Insight film, 6-cm exposure field) and 1.4 hours (with use of a semiconductor sensor). Whether or not this low exposure can be justified depends on the quality of the technical performance of the procedure. Only through the use of sensors or film holders, which provide the ability to take standardized radiographs, is it possible to accurately capture the anatomic relationships and compare sequential images. Errors in film processing are generally responsible for reduced image quality.

The patient moved the film packet against the alveolar process, so that the angle of projection was too steep. The teeth appear foreshortened, and the occlusal parts of the crowns are not visible. As a result the dental caries on tooth 26 was underestimated and tooth 27 was mistakenly treated.

Left: This example of a dissected specimen shows that if the palatal root of a maxillary molar appears considerably longer than the buccal roots, then the angle of projection of the x-ray beam was too steep in the vertical plane. 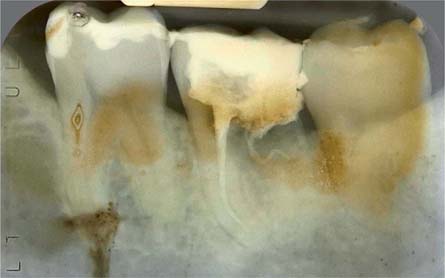 With the use of a film holder, the situation in the previous figure is better depicted on the radiograph, which now shows all relevant dental and other anatomic details.

Left: The less the palatal root is superimposed on the buccal roots, the better the right-angle projection to the long axis of the tooth (shown on dissected specimen).

The “European Guidelines on Radiation Protection in Dental Radiology” (and similar guidelines in the United States and other countries) provide for the first time an evidence-based guide to indications for radiographic examinations in dental practice. With regard to endodontics, the following regulations specifically apply: Diagnostic and final follow-up radiographs are an absolute necessity. A film for estimating the working length is necessary when/>