The connective tissue underlying the oral epithelium is called the lamina propria and can be divided into two layers: the superficial papillary layer (associated with the epithelial ridges or papillae) and the deeper reticular layer. The term reticular refers to the net-like arrangement of the collagen fibers; it has nothing to do with the so-called reticulin fibers, situated beneath the basal lamina.

The structural difference between these two layers is subtle and reflects the relative concentration and arrangement of the collagen fibers and of other components such as capillaries (Fig. 5.1A). In the papillary layer, collagen fibers are thin and loosely arranged, and many capillary loops are present. By contrast, the reticular layer has collagen fibers arranged in thick bundles that tend to lie parallel to the surface plane. 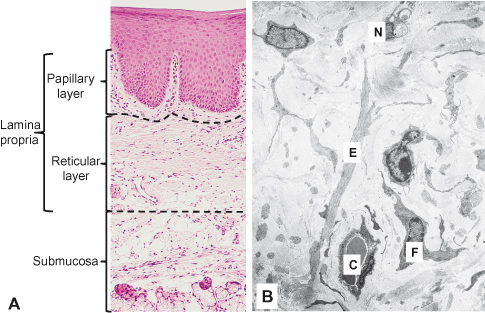 The lamina propria consists of cells, blood vessels, neural elements, and fibers embedded in an amorphous ground substance (Fig. 5.1B). Like the overlying oral epithelium, it shows regional variation in the proportions of its constituent elements, particularly in the type, concentration, and organization of fibers.

The lamina propria contains a variety of different cells: fibroblasts, macrophages, mast cells, and an array of inflammatory cells. A description of the major cells of the lamina propria can be found in Table 5.1.

Table 5.1 Cell types in the lamina propria of oral mucosa. 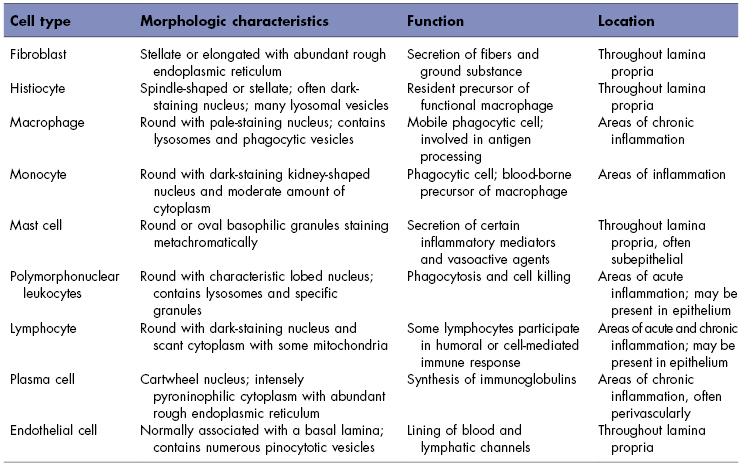 The principal cell in the lamina propria of oral mucosa is the fibroblast, which is responsible for the elaboration and turnover of both fiber and ground substance. It thus plays a key role in maintaining tissue integrity.

Under the light microscope, fibroblasts are either cigar-shaped (fusiform) or star-shaped (stellate) with long processes that tend to lie parallel to bundles of collagen fibers and are not easily visible with the light microscope. Their nuclei contain one or more prominent nucleoli. Ultrastructurally, (Fig. 5.2A) fibroblasts have the characteristics of active synthetic cells, including numerous mitochondria, an extensive granular endoplasmic reticulum (which is often distended by its contents), a prominent Golgi complex, and numerous membrane-bound vesicles. Fibroblasts have a low rate of proliferation in adult oral mucosa except during wound healing, when their number increases as a result of fibroblast division in the adjacent uninjured tissues. It is now becoming apparent that they have varied roles depending on environmental demands. Fibroblasts can become “contractile” and participate in wound contraction, in which case they develop intracytoplasmic actin filaments. In certain disease states (e.g., the gingival overgrowth sometimes seen with phenytoin, calcium channel blockers such as nifedipine, and cyclosporine A, an immunosuppressant drug used in organ transplants), fibroblasts may secrete more ground substance than normal, and breakdown of type I collagen is reduced (Kataoka et al., 2005). Fibroblasts exhibit remarkable anatomic site specificity, evident in gene expression patterns, particularly among the HOX gene family (Rinn et al., 2008). Dependent on anatomic site, fibroblasts may have an important role in induction of overlying epithelia and development of fibrosis in wound healing as a result of interaction with other cells via cytokine growth factors, such as TGF-β (Atamas, 2002). 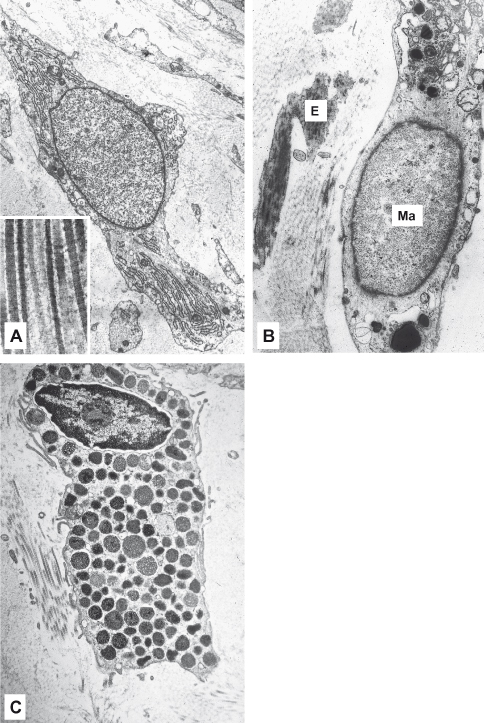 The fixed macrophage (histiocyte) is also a stellate or fusiform cell, and unless it is actively phagocytosing extracellular debris, it may be difficult to distinguish from a fibroblast under the light microscope. Ultrastructurally, macrophages have smaller and denser nuclei and less granular endoplasmic reticulum than fibroblasts, and their cytoplasm contains membrane-bounded vesicles that can be identified as lysosomes (Fig. 5.2B).

The macrophage has a number of functions, the principal one being to ingest damaged tissue or foreign material in phagocytic vacuoles that fuse, intracytoplasmically, with lysosomes and initiate breakdown of these materials. The processing of ingested material by the macrophage may be important in increasing its antigenicity before it is presented to cells of the lymphoid series for subsequent immunologic response. Another important function is the production of cytokines and chemokines that stimulate fibroblast proliferation and collagen production necessary for repair (Atamas, 2002).

In the lamina propria of the oral mucosa, two special types of macrophages can be specifically identified: the melanophage and the siderophage. The melanophage, which is common in pigmented oral mucosa, is a cell that has ingested melanin granules extruded from melanocytes within the epithelium. The siderophage is a cell that contains hemosiderin derived from red blood cells that have been extravasated into the tissues as a result of mechanical injury. This material can persist within the siderophage for some time, and the resultant brownish color appears clinically as a bruise.

The mast cell is a large spherical or elliptical mononuclear cell (Fig. 5.2C). Its nucleus is small relative to the size of the cell and in histologic preparations is frequently obscured by the large number of intensely staining granules that occupy its cytoplasm. These granules stain with certain basic dyes such as methylene blue because of the presence of heparin within the granules. In humans, the principal contents of the granules are histamine and heparin and cytokines such as tumor necrosis factor alpha (TNF-α) and interleukins.

Mast cells are primarily located adjacent to the basement membrane of endothelial cells and nerves in the connective tissue of oral mucosa. Their migration is influenced by synthesis of mast cell growth factor (MGF) by enodothelial cells and keratinocytes (Walsh, 2003). Because these cells are frequently found in association with small blood vessels, it has been suggested that they play a role in the development of inflammation and in the shift from acute to chronic inflammation.

Histologically, the lymphocyte and plasma cell may be observed in small numbers scattered throughout the lamina propria, but apart from such specialized regions as the lingual tonsil, other inflammatory cells are found in significant numbers only in connective tissue, either following an injury (e.g., a surgical incision) or as part of a disease process. When inflammatory cells are present in significant numbers, they influence the behavior of the overlying epithelium by releasing cytokines.

As in other parts of the body, the type of inflammatory cell is dependent on the nature and duration of the injury. In acute conditions, polymorphonuclear leukocytes are the dominant cell type, whereas in more chronic conditions (e.g., periodontal disease), the majority of these cells are T lymphocytes with lesser amounts of macrophages, monocytes, B lymphocytes, plasma cells, and dendritic Langerhans cells. The recruitment of polymorphonuclear leukocytes and macrophages represents an important component of the innate immune response to infection in the mucosa (Dongari-Bagtzoglou and Fidel, 2005).

The lamina propria contains a three-dimensional network of fibers arranged in groups and ground substance composed of water, glycoproteins, and proteoglycans and serum-derived proteins. There are two major types of fibers, collagen and elastin, together with fibronectin./>