Establishment of an interdisciplinary team

When treating an adult patient, orthodontics will, in the majority of cases, be only part of the patient’s need for dental treatment. A few decades ago, it was more the rule than the exception that at the end of life people had none or very few remaining natural teeth, with or without removable dentures, depending on the society they lived in. However, during the past 10 years it has became increasingly more unacceptable to wear a removable denture in the so-called First World (Wostmann et al. 2005). As a consequence of the reduction in caries and the treatment of periodontal disease, an increasing number of elderly people still have several natural teeth (DeBiase and Austin 2003; Pyle and Stoller 2003). This has resulted in an increase in the potential population seeking solutions for a secondary malocclusion. As noted in previous chapters, a secondary malocclusion may develop as a consequence of age-related changes in general resistance, or in the local environment, due to wear, loss of one or more teeth or periodontal disease. With the changes in the constraints, spontaneous tooth migration may take place and lead to the development of secondary malocclusions. These cannot be treated as isolated phenomena and orthodontics will be but one component in the re-establishment of an aesthetically and functionally satisfactory dentition. This can only be achieved by collaborative working of several disciplines.

Recent developments within periodontal and conservative dentistry have led to a redefinition of the treatment goal. Within periodontology, the treatment goal is no longer limited to arrest of the destructive process but to re-establish lost periodontium through the principle of guided regeneration and/or application of growth factors (Venezia et al. 2004). The use of guided tissue regeneration (GTR), which also serves as a barrier ensuring new bone formation adjacent to implants (Pretorius et al. 2005), and the application of biochemical compounds with osteogenic potential, have impacted on the possible treatment strategies for degenerating dentitions (Terranova and Wikesjo 1987; Hammarstrom 1997; Gestrelius et al. 2000; King 2001). Within prosthodontics, lost teeth that were usually replaced by dentures or bridges are nowadays more frequently being replaced by intraosseous implants. In the presence of a malocclusion, orthodontics is a necessary component of the total treatment, which involve collaboration between different specialties. The approach to the treatment may be multidisciplinary or interdisciplinary.

No attention seems to have been specifically paid to differentiating between the words interdisciplinary and multidisciplinary. There is, however, a significant difference in the meaning of the words. The word multidisciplinary indicates solely that more than one discipline is involved – the act to be performed is composed of several different branches of learning. The word interdisciplinary, on the other hand, indicates an interaction between the involved disciplines, an interaction which is required both in the planning phase and during treatment. Interdisciplinarity requires a team which is highly interactive. Whereas the ability of the involved colleagues to treat is limited to one area, interdisciplinarity requires a high level of information, not only within one’s own specialty but also about the state of the art of all the involved disciplines. Important issues here are clear agreement about the distribution of responsibilities and shared knowledge of the patient’s expectations.

In the case of failed or no interaction, each of the involved colleagues will see the problem from their own angle only and may not have a full understanding of the different disciplines involved. The result of multidisciplinary treatment can therefore never be better than the sum of the contribution of each of the colleagues. A lack of insight in the total treatment may lead to an inappropriate sequence of treatment events or even prevent delivery of the optimal treatment. For example, the chosen site for an implant may be inconvenient from the orthodontic point of view as the occlusion following the orthodontic treatment was not foreseen (Fig. 4.1). Likewise, teeth that require to be extracted as part of the orthodontic treatment might be submitted to endodontic or prosthetic treatment (Fig. 4.2).

Fig. 4.1 (1,2) This patient had two implants placed before referral for orthodontics. (3) Following the correction of the arch form it can be seen that the placement of the implants interfered with the optimal orthodontic treatment as the implants were either too far distal for space closure or too far mesial for a reasonable replacement option distal to the canines.

Fig. 4.2 (1) This patient had an incisor and a premolar crown made shortly before a referral for orthodontic treatment. The crowned premolar was extracted to allow correction of the increased overjet and the crowned incisor was extruded and the crown then needed to be replaced (2).

During an interdisciplinary interaction it will not only become clear how each discipline can contribute to the solution of a problem, but also expand the capacity of each discipline and thereby often make the impossible possible. Figure 4.3 illustrates this situation. A partially edentulous patient was referred to the orthodontic department as her incisors were drifting more and more forwards. She had undergone periodontal treatment and had at the time of referral a healthy periodontium and no pathological pockets. The remaining teeth had, however, much reduced periodontal support and when the periodontist suggested retraction and intrusion of the upper anterior teeth, the first question from the orthodontist was: ‘Against what? Which teeth can be used as anchorage?’ There were none. The extremely weak molars tipped forward within a week when loaded with a force of 50 cN. The periodontist, on the other hand, was not discouraged. She pointed to the zygomatic arch and asked: ‘Can we find anchorage in that region? Why not try?’ A surgical wire was inserted into a small hole made through the zygomatic arch. The wires were loaded immediately and served as anchorage for the retraction and intrusion of the incisors. Fourteen more patients were treated in the same way. There were, however, several inherent drawbacks in the method: only a very limited range of force direction could be obtained (Melsen et al. 1998), and the insertion procedure was a surgical intervention which required particular skills. Therefore this method was replaced with the use of a mini-implant that could be easily inserted (Costa et al. 1998). The mini-implants could be used in other areas of the mouth too and soon a number of intraosseous anchorage systems saw the light (Melsen 2004, 2005; Melsen and Verna 2005). If the periodontist had not asked the orthodontist to perform the impossible, skeletal anchorage would not have been developed at that time.

Fig. 4.3 (1–3) The dentition did not allow for conventional anchorage, so a wire through the infrazygomatic crest provided skeletal anchorage against which the anterior teeth were retracted. (See also Chapter 8.)

Establishment of an Interdisciplinary Team

The establishment of an interdisciplinary approach requires not only close communication between colleagues but also mutual respect and confidence. Usually the team includes a periodontist, a prosthodontist and an orthodontist maybe assisted by a gnathologist and a maxillofacial surgeon. In relation to the diagnosis a radiologist may be needed and if parafunctions or muscular tensions cannot be managed satisfactorily, a physiotherapist may be needed (Fig. 4.4). In addition, the collaboration of medical specialties may be needed.

Fig. 4.4 The disciplines frequently involved in the treatment of adult patients. 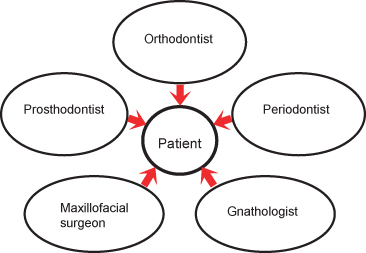 The collaboration starts when the problems are listed. The patient’s chief complaint will often be of an aesthetic nature. This fact, however, does not exclude the need in any adult patient for drawing up a comprehensive problem list. The problem list is developed by dentists from the different disciplines involved and includes, in addition to the orthodontic findings, necessary features from the patient’s general physical and psychological health profile, findings related to function, the periodontium and the dental status. The materials used for the interdisciplinary discussion comprise the results of the clinical examination, analysis of photographs and X-rays, and if relevant the results of other special investigations such as the bite force, jaw tracking and electromyography (EMG). It is during the work-up of the treatment goal that mutual inspiration between team members may allow the limits for the possible to be shifted.

Dentists are frequently prejudiced when judging a new patient. This attitude may influence the suggested treatment plan. The first look, however, may give an erroneous impression of the patient as illustrated in the following example (Fig. 4.5): A young patient presented with a wish of having a median diastema closed. Looking at the patient, the first thought may be: ‘How did the patient get the idea of an orthodontic treatment?’ Massive calculus deposits were present in the lower jaw and a clinician’s initial impression might be that the patient had no wish or ability to maintain the oral hygiene levels necessary for major dental treatment. Photographs were obtained and following cleansing and scaling, the patient was given thorough instructions in the tooth brushing technique he was required to follow for maintaining satisfactory oral hygiene. It was explained to the patient that the tooth brushing programme, which varies from individual to individual, was his own responsibility and that probably nobody ever explained to him how it should be done. The reaction to the instruction was excellent.

Fig. 4.5 (1–3) Patient with a median diastema (see also Chapter 13). The oral status and dental hygiene led the dentist to reject even any thought of orthodontics. (4) Following professional cleansing and instructions, the patient, however, learnt to maintain meticulous hygiene and eventually had the desired orthodontic, periodontal and prosthodontic treatment. Patient treated by F. Milano. 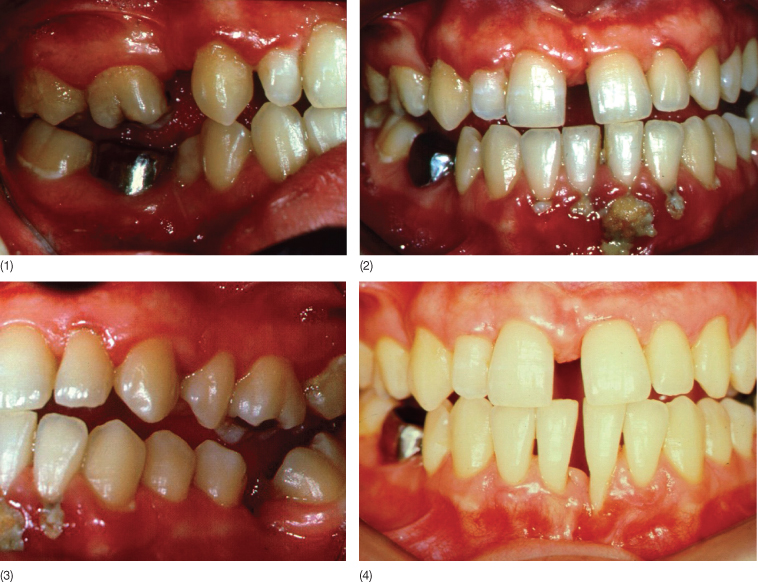 Based on an examination of the study casts, it was explained to the patient that closure of the diastema would not be a simple affair, which could be done in isolation, but that space w/>