Among the most important aspects of patient care is the accurate diagnosis of the patient’ s disease. This task is made immeasurably more difficult by the fact that the clinical presentation of so many disease processes can be strikingly similar, despite potentially vast differences in etiology and pathogenesis. This is especially true for the many pathologic entities developing with the bones of the maxillofacial region.

Routine radiology has provided a reasonably effective means by which to distinguish one lesion or type of lesion from another, but the two – dimensional nature of radiographs imposes an obvious need for the interpretation of artifacts and superimpositions, making radiographic diagnosis more of an art than a true science. Nevertheless, the dental profession, or at least some among the profession, has been rather successful in formalizing an accurate system of radiographic features to aid in the development of a differential diagnosis of osseous lesions (Table 4.1).

The advent of the computed tomography (CT) scan greatly enhanced our ability to characterize pathologies of the maxillofacial bones, but the early images (“slices”) were so thick and the distance between slices was so great, up to 7 mm, that much of the diagnostic detail was lacking and the clinician still had to extrapolate for an accurate interpretation. With more powerful computers and advanced programming allowing very small distances between slices and also allowing one to move smoothly through the slices for an almost three- dimensional view of a lesion, CT technology, including the cone beam CT (CBCT), has brought us to a level of unparalleled diagnostic capacity. In fact, these technologic advancements provide enough datapoints to actually allow the re- creation of the maxillofacial region in an undistorted three- dimensional image, including pathologic lesions (Figure 4.1).

This diagnostic advantage, however, is new enough that the dental profession has not yet had the time to establish a diagnostic classification system as useful as the one available for more routine dental radiographs. Only time will tell whether a new system will emerge or the old system will simply be refined, but it seems much more likely that the latter will occur.

One of the major advantages of CT and CBCT imaging is its ability to better assess the margins or borders of an intraosseous lesion. This is extremely useful in determining the aggressive or infective nature of a pathologic entity. With routine radiology, a simple periapical cyst, for example, may be poorly demarcated when, in fact, it is found at surgery to have very sharp margins. This long ago led to the conclusion that one cannot radiographically distinguish between periapical cysts and periapical granulomas. With spiral CT or CBCT, considerable additional information can be derived relative to:

Figure 4.2 Comparison of a pantographic radiograph (top left) and computed tomography scan of a dentigerous cyst of the posterior right maxilla. Note the rather uniform, imperforated cortical expansion of this well- demarcated lesion. 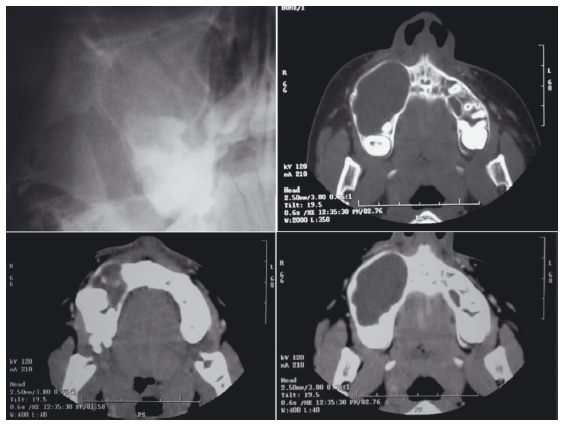 Figure 4.3 Comparison of pantographic radiograph (top) and computed tomography (bottom) images of a compound odontoma (arrows). Note the expansion into the sinus floor and the radiolucent fibrous capsule surrounding the lesion. 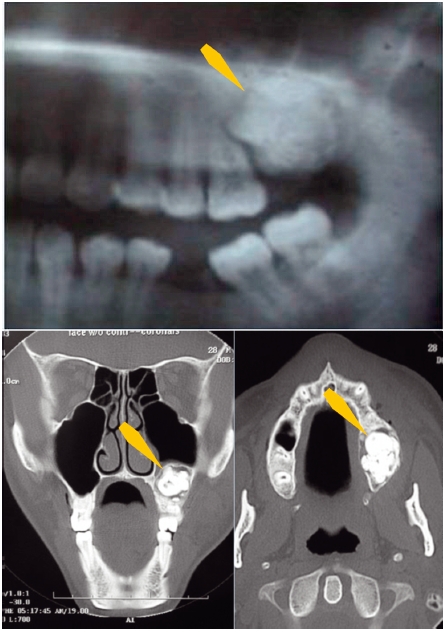 Detailed assessment of the periphery is especially important because certain lesions will have a focus, perhaps only a small focus, of indistinct border or border perforation, possibly representing an area of infection, ischemic damage, or malignant transformation in an otherwise benign entity, which can drastically change our understanding of the specific lesion. A cyst, for example, may develop infection and carcinoma (albeit a rare event), leading to a moth- eaten radiolucency, diminished bone density (Figure 4.6), or actual perforation (see Figure 4.4) of the thin bony wall surrounding it. Even a small area of inflammation or infection can explain a symptomatic cyst and may lead to an altered treatment plan or management, perhaps with preoperative antibiotics, or perhaps with extra attention paid to the area of interest during the surgery.

Figure 4.4 Comparison of pantographic radiograph (top) and computed tomography (bottom) images of an odontogenic keratocyst (arrows). Note the lack of cortical expansion and the lingual perforation. 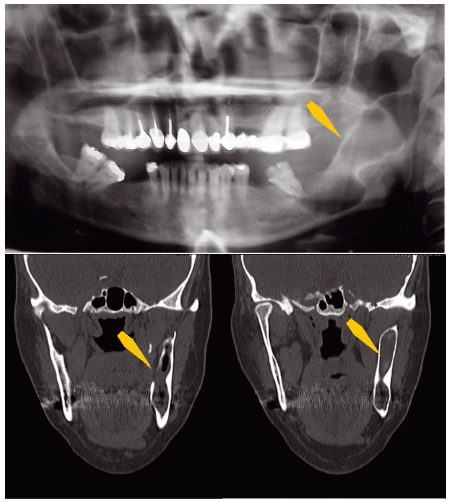 Figure 4.6 Computed tomography images of an impacted maxillary molar with an associated dentigerous cyst (biopsy showed it to be odontogenic keratocyst). Arrows point to posterior cyst wall with low bone density secondary to infection of the underlying cortical bone. 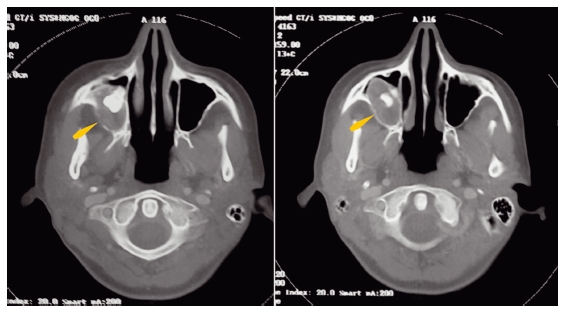 When the lesion is one that can perforate the overlying cortex and extend into surrounding soft tissues, such as an intraosseous malignancy, ameloblastoma (Figure 4.7), or odontogenic keratocyst (see Figure 4.4), the identification of a cortical defect becomes not only invaluable, but absolutely essential. Additionally, extension from the main body of an intraosseous lesion, such as is seen with a dental fistula, may be tracked with relative ease from the lesional origin to the end of the extension, for example a fistulous opening, with CT/CBCT imaging. These peripheral or border defects are seldom visualized with conventional dental radiology.

A well – demarcated border, with a sharp, abrupt transition from lesion to surrounding bone, is, of course, a well – accepted sign of slow growth and a lesion, such as a cyst or benign neoplasm (see Figures 4.2, 4.4, and 4.7), that is pushing rather than invading into adjacent bone. The thin sclerotic rimming at the periphery of such lesions is the typical result of slow enlargement, representing the body’ s protective attempt to wall off the lesion, and this provides an additional assurance of the benign nature of the lesion. This concept was established via radiology, but modern CT and CBCT images allow an assessment of all margins, with no superimpositions, and especially allow an assessment of the uniformity of thickness of the reactive bony response (see Figure 4.2).