The adrenal gland is the source of a diverse group of hormones essential to metabolic control, regulation of water and electrolyte balance, and modulation of the body’s response to stress. The medullary portion of the gland secretes epinephrine and norepinephrine on sympathetic stimulation. These hormones and their physiologic effects and pharmacologic actions have been previously discussed (see Chapters 5 and 6). The adrenal cortex produces numerous substances derived from cholesterol and collectively known as corticosteroids. Certain corticosteroids and their synthetic analogues are used in medicine for replacement in adrenal insufficiency. They are used even more widely for an array of nonadrenal diseases, primarily for their notable ability to suppress the acute or chronic inflammation that accompanies injury and many diseases. When corticosteroids are administered in hyperphysiologic doses over long periods, as they often are in chronic inflammatory disorders, severe and even lethal toxicity can result. To understand the therapeutic applications and limitations of this group of drugs properly, the physiologic role of corticosteroids must be reviewed.

Using cholesterol as a substrate, the adrenal cortex synthesizes and secretes two types of steroid hormones—the 19-carbon androgens and the 21-carbon corticosteroids (Figure 35-1). The latter group can be considered derivatives of pregnane (Figure 35-2). The corticosteroids can be classified further on the basis of their major actions. Some of these compounds, such as hydrocortisone (the nonproprietary name for the natural hormone cortisol), have greater effects on carbohydrate metabolism, as measured by liver glycogen deposition, and are termed glucocorticoids. They also possess potent anti-inflammatory actions and are used therapeutically for this purpose. Other compounds, represented by aldosterone, are most active in enhancing Na+ retention and are referred to as mineralocorticoids. These corticosteroids do not have anti-inflammatory effects (Table 35-1). The structures of hydrocortisone and aldosterone are shown in Figure 35-2. 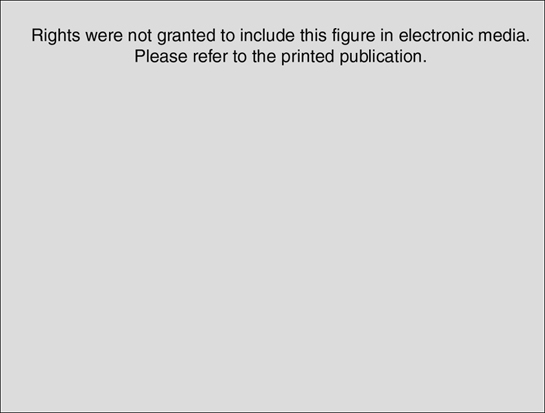 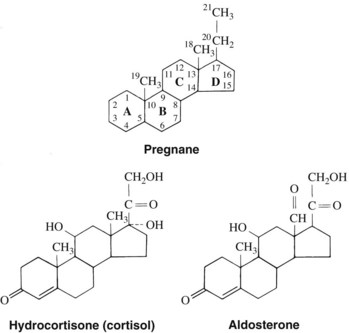 Production of corticosteroids and androgen is highly compartmentalized in the adrenal cortex (Figure 35-3). The mineralocorticoid aldosterone is produced by the outer layer cells (zona glomerulosa), cortisol and other glucocorticoids are produced by the middle layer (zona fasciculata), and the androgens are produced by the inner layer (zona reticularis) adjacent to the medulla. The corticosteroids are not stored to any extent in the adrenal gland but are continuously synthesized and secreted. The total daily production of the major glucocorticoid, cortisol, is normally 20 to 25 mg. There is a strong diurnal variation in this process; plasma concentrations of cortisol are severalfold higher at 8 a.m. than at 4 p.m. 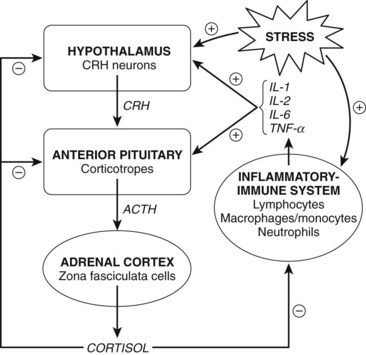 FIGURE 35-4 Hypothalamic-pituitary-adrenal axis and its relationship to stress and the inflammatory-immune system. Cortisol exerts a negative feedback control on the secretion of corticotropin-releasing hormone (CRH) and adrenocorticotropic hormone (ACTH). Physiologic or psychological stress increases cortisol secretion directly through neural mechanisms or by activation of the inflammatory-immune system and production of cytokines, including interleukin-1 (IL-1), interleukin-2 (IL-2), interleukin-6 (IL-6), and tumor necrosis factor-α (TNF-α).

Corticosteroids play diverse and complex roles in the body economy of mammalian organisms. They are involved in carbohydrate, protein, lipid, and purine metabolism; electrolyte and water balance; the functions of the cardiovascular, nervous, and immune-inflammatory systems; and the functions of the kidneys, skeletal muscle, bone, and most other organs and tissues. The hormones of the adrenal cortex play a major role in the ability of animals to withstand stressful events. Without the adrenal cortex, life is possible only when food and large amounts of salt and water are regularly ingested, a constant ambient temperature prevails, and infection and other perturbing events are absent.

Most of the diverse actions of corticosteroids seem to be achieved by regulating gene expression. As described in Chapter 32, glucocorticoids enter target cells and bind to cytosolic receptors. These receptors exist in a complex with several proteins, including heat shock protein and an immunophilin. Binding by the hormone or a synthetic analogue alters the conformation of the receptor, freeing it from the associated proteins. The hormone-receptor complex migrates to the nucleus and binds to the glucocorticoid-responsive elements on DNA of affected genes. The DNA-binding domain on the receptor is distinct from the drug-binding domain. Gene expression is regulated either negatively or positively to render the characteristic and complex glucocorticoid signature for modification of protein synthesis.14 The mechanism of action of mineralocorticoids has been less well studied, but it seems to be similarly based on regulation of transcription in renal and other target cells.

Consistent with the mechanism described, the major effects of corticosteroids are not manifested for several hours. Other, less apparent effects are more immediate, however. These likely occur through other receptor mechanisms involving the plasma membrane of target cells.7

The pharmacologic effects of glucocorticoids are largely exaggerations of the physiologic functions of the endogenous corticosteroids. These effects simulate the pathologic features of Cushing’s syndrome, a metabolic disorder resulting from an excess of corticosteroids, primarily cortisol. A review of these features and their pathophysiologic basis is helpful in understanding the pharmacologic and toxic actions of glucocorticoids.15

Through several actions, glucocorticoids exert prominent anti-insulin effects. Glucocorticoids decrease the peripheral use of glucose by decreasing the cellular uptake of glucose. In the liver, glucocorticoids specifically stimulate glucose synthesis from amino acids (gluconeogenesis)8; concurrently, they mobilize amino acids by inhibiting protein synthesis in muscle, connective tissues, and skin (antianabolic effect). These actions are reflected in the parallel increases in blood glucose, liver glycogen, and urinary nitrogen excretion seen after the administration of glucocorticoids. As a consequence of these actions, prolonged high titers of glucocorticoids cause clinical manifestations of protein wasting: retardation of linear growth in children, wasting of the skin and increased capillary fragility resulting in ecchymoses, loss of muscle tissue leading to weakness (which may be extreme), and osteoporosis associated with enhanced bone resorption.

The effects of glucocorticoids on lipid metabolism antagonize the actions of insulin further. Glucocorticoids inhibit fatty acid synthesis and exert a permissive action on fatty acid mobilization from adipose tissue by lipolytic hormones. Long-term administration of large doses of glucocorticoids causes redistribution of fat from peripheral stores to more central locations on the back, shoulders, abdomen, and face; the result is termed centripetal obesity. Cutaneous striae form on areas of the trunk where the skin is stretched by the accumulation of fat.

Excesses or deficiencies of corticosteroid hormones are associated with severe disturbances in electrolyte and fluid balance. These disturbances result from the following actions of corticosteroids on the kidney: stimulation of reabsorption of Na+ from the tubular fluid and increased urinary excretion of K+ and H+ ions. Excessive concentrations of corticosteroids lead to Na+ retention, hypokalemia, alkalosis, and expanded extracellular fluid volume. These changes are manifested clinically by edema and hypertension; they may lead to left ventricular hypertrophy and predispose the patient to congestive heart failure and stroke. In corticosteroid deficiency (Addison’s disease), essentially the opposite occurs (loss of Na+, hyperkalemia, reduced extracellular fluid volume, and generalized cellular hydration) and, if severe, may lead quickly to death.

Glucocorticoids, by their action on gene expression, induce the production of numerous proteins with anti-inflammatory action, including annexin-1 (formerly lipocortin-1). Annexin-1 is a multifunctional protein that inhibits phospholipase A2 as one of its actions. The resulting decrease in the production of arachidonic acid leads to a reduction in the synthesis of prostaglandins and leukotrienes, important mediators of inflammation. (See Chapter 21 on nonsteroidal anti-inflammatory drugs [NSAIDs].) This effect is particularly important in macrophages, monocytes, endothelial cells, and fibroblasts. Glucocorticoids also suppress the synthesis of cyclooxygenase. The net result of these two actions is an inhibition of neutrophil, eosinophil, and monocyte chemotaxis (from inhibition of leukotriene B4 synthesis), inhibition of capillary permeability and bronchoconstriction (from decreased leukotrienes C4 and D4 and the prostaglandin PGF2α), and inhibition of the vascular and inflammatory responses to the prostaglandins PGI2 and PGE2.

In addition, glucocorticoids inhibit the production of eosinophils, basophils, monocytes, and lymphocytes; the synthesis of various cytokines (interleukins and tumor necrosis factor-α) in macrophages, lymphocytes, monocytes, and endothelial cells; and the release of histamine. Glucocorticoids inhibit the synthesis of adhesion molecules in endothelial cells; this impairs the attachment of inflammatory cells and hinders their recruitment to sites of inflammation.

Glucocorticoids are widely used to suppress undesirable immune reactions such as graft rejection. The mechanism for this effect is complex but involves glucocorticoid inhibition of T-lymphocyte activation and proliferation. Production of plasma cells is also inhibited. These effects on T and B lymphocytes seem to be largely caused by the reduced production of cytokines, as described previously. Glucocorticoids impair the ability of inflammatory cells to migrate into sites of immunologic or inflammatory reactions. Phagocytosis and subsequent digestion (processing) of antigen by macrophages, events necessary for the development of some immune responses, are inhibited. Finally, glucocorticoids suppress antibody production.

All the natural and synthetic corticosteroids except desoxycorticosterone are well absorbed from the gastrointestinal tract. Significant amounts of these drugs may also be absorbed from sites of local application, such as the skin, mucous membranes, and eye. In normal circumstances, more than 90% of circulating corticosteroids are bound to plasma proteins, principally an α-globulin (corticosteroid-binding globulin, also known as transcortin), which has a high affinity but low capacity for these compounds, and albumin, which has the opposite characteristics.

Hydrocortisone is rapidly degraded in the liver by reduction, conjugated with glucuronic acid, and excreted in the urine. Most other corticosteroids are similarly metabolized, although at different rates. The plasma half-life of hydrocortisone is approximately 1.5 hours. Synthetic analogues of hydrocortisone generally have longer half-lives; the potent long-acting compound dexamethasone has a plasma half-life of approximately 4 hours and a tissue half-life of approximately 2 days. Because the corticosteroids act by modifying gene expression, the time course of effect bears little correspondence to the plasma concentration.

The major metabolic products of corticosteroid metabolism found in the urine, 17-hydroxycorticosteroids and 17-ketosteroids, were formerly measured by clinical laboratories to assess adrenal-pituitary function. This method has been largely supplanted by direct measurement of plasma cortisol concentrations by radioimmunoassay.

Glucocorticoids are used clinically in two ways. The first and most intuitive is replacement therapy. Insufficient production of corticosteroids can result from a defect in the adrenal cortex, anterior pituitary, or hypothalamus; these defects may be congenital or a/>