30: The Child in Contexts of Family, Community, and Society

CHAPTER 30 The Child in Contexts of Family, Community, and Society 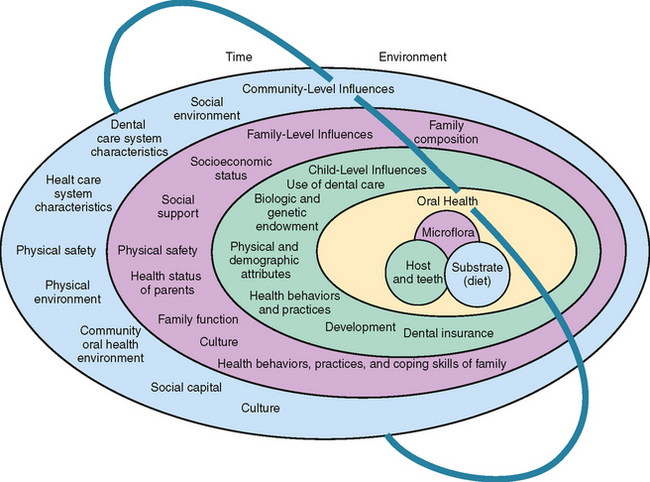 This shift from thinking of individual children as “patients” to thinking about the oral health of all children is inherent to a shift from “clinical-think” to “population-think” or “public health-think.” Just as clinical dentistry uses standard approaches to assessing the individual child’s oral health status through complete examination, providing needed services through clinical care, and assuring oral health promotion through ongoing preventive care, so too does population-oriented public health dentistry conduct surveillance to assess population health, attend to the adequacy and availability of dental care delivery systems to provide care, and conduct oral health promotion activities that maximize the totality of a society’s oral health.

Pediatric dentistry and public health dentistry share common origins, because society, most often through its governmental structures, has long attended to the needs and interests of vulnerable populations, whether those populations are made vulnerable by social or physical liabilities or dependencies that result from age or special needs. Pioneers in community dentistry who were motivated by concern for children’s oral health include photography giant George Eastman who developed school-based dental programs at the turn of the twentieth century, Alfred Fones who founded the dental hygiene profession’s first school in 1913, and American Academy of Pediatric Dentistry (AAPD) founders who created an organization with a mission that today affirms its commitment to “advocate policies, guidelines and programs that promote optimal oral health and oral health care for children.”

Just as the range of potential interventions for clinicians is wide, so too is the range of potential interventions for dentists who commit their work to improving all children’s oral health. At the family level, oral and general health behaviors and environmental conditions, including availability and use of fluoridated water, are key oral health determinants. At the community level, the availability of oral and general health educational programs, school-based and school-linked dental sealant programs, school nutrition and “junk-food” policies, and even school-based dental care programs exemplify oral health and dental care determinants that address groups of children rather than individual children. At the societal level, state and federal policies on licensure regulate the availability of dental workforce, policies on financing of public insurance programs like Medicaid and the State Children’ Health Insurance Program (SCHIP) influence the availability of care, and fluoridation policies impact disease burden. Questions of who can provide what components of care with what financing under what conditions and to which children are the “mega” systems questions of public health and public policy that directly impact the practice of dentistry for children.

Care of children requires a working knowledge of all core dental disciplines with a particular application to patients who are simultaneously growing and developing. Care of populations similarly requires a working knowledge of all core public health disciplines. Epidemiology is the study of disease prevalence, distribution, and correlates across groups of people and is analogous to diagnostic modalities in clinical dentistry. Biostatistics is the discipline of measurement whose theories and techniques are used for describing, analyzing, and interpreting health data. It is analogous to skills used to interpret clinical data. Environmental health is the branch of public health that deals with all aspects of the natural, built, and social environment as it impacts human health. It is analogous to the clinician’s assessment of individual children’s home conditions that impact oral health behaviors, care seeking, compliance, and health outcomes. Nutrition is the study of foods and nutrients and their effect on health and plays the same role in population health as it does in individual health. The public health discipline of health policy and management deals broadly with the conditions under which care is provided across populations by dealing with issues as wide ranging as care financing, health care workforce, safety-net health facilities, systems of care, resource allocations, and governmental and professional regulation. It is analogous to the wide range of issues that clinical dentists deal with in managing their practices. Just as in dentistry, children and families have their own unique holistic niche within public health in the discipline of maternal and child health (MCH)—the field that deals with children, including those with special health care needs, in the context of their parents, families, communities, and societies. As dentistry for children uses all of the clinical disciplines, so too does MCH use all of the disciplines of public health to focus attention on children’s health. The essential need for both pediatric dentistry and MCH was well stated by child health leader Grace Abbott in the 1930s when she asserted that “children are not pocket editions of adults” but need to be attended to with special consideration of their vulnerabilities and served through an approach that is “not merely an adaptation of the program for adults.”

With this perspective, it is clear that public health dentistry is of direct relevance to the daily practice of dental care for children. This chapter describes many of the opportunities, options, resources, and possibilities available to the dental professions to assess, improve, promote, and manage the oral health of children.

A quote attributed to the classical Roman poet Virgil, “as the twig is bent, the tree inclines” provides a paradigm for public health’s concern for children and their oral health. After following a cohort of 980 people from birth to age 26, researchers noted that “adult oral health is predicted by not only childhood socioeconomic advantage or disadvantage, but also by oral health in childhood.”1 Research techniques in MCH, including “social determinants of health,” “lifecourse studies,” and “common determinants of health modeling,” all suggest that conditions impacting children play out consequentially throughout life. This is particularly true of oral health in that having childhood caries, particularly early childhood caries, is the strongest indicator of lifelong caries risk. This is because the presence of early childhood caries signifies the presence of a well-established caries process that remains stable as the primary teeth exfoliate and are replaced by permanent teeth and as periodontal diseases cause recession that exposes root surfaces to caries as children age into adulthood and senescence. Similarly, genetic, environmental, behavioral, and even psychological factors strongly impact periodontal health, dental development, occlusion, the occurrence and effects of trauma, susceptibility to soft tissue lesions, and every other aspect of a child’s oral health.

While dental care is an essential component of oral health attainment and maintenance, its contribution is relatively modest compared with other oral health determinants. One effort to model the relative importance of various determinants of general health suggests that only about 10% of health status can be explained by access to health care. The remaining 90% can be attributed primarily to health behaviors and secondarily to environmental and hereditary factors.2 Such conceptual modeling has been applied to children’s oral health status to clarify the relative importance of various oral health determinants. The model shown in Fig. 30-1 lists the “use of dental care” as only one of six “child-level” factors influencing oral health along with eight “family-level influences”, eight “community-level influences,” and the ongoing impacts of time and environment on each level of influence.3 An analogous approach to explaining oral health disparities in children considers four levels of influence: (1) “macro” factors as wide ranging as the natural environment and dental care systems that are available to children; (2) “community” factors that include the social/cultural environment and availability of dental services; (3) “interpersonal” factors involving social stressors, integration, and support; (4) “individual” factors of biology, health behaviors, care-seeking behaviors, and psychological considerations.4

Such models help clinicians understand the range of factors that they can, and cannot, manage or influence in seeking to help each child and each child’s family obtain and maintain excellent oral health. The technical content of clinical care is entirely within the scope of clinical dental practitioner. However, key approaches to children’s dental care, including anticipatory guidance, primary prevention through modification of health behaviors, disease suppression through individually tailored disease management plans, and encouraging compliance with professional recommendations, all move the clinician away from the biologic sciences and their technical correlates and into the realms of social and behavioral sciences and their roles in health education and health promotion. These “soft” disciplines have equal relevance for the oral health of individuals and populations. The dentist who seeks to improve children’s oral health must therefore rely equally on clinical and public health interventions that are based on both “hard” and “soft” science.

The term disease burden implies the volume and distribution of disease within a population as well as its consequences in terms of morbidity and mortality. Dental caries remain highly prevalent worldwide (Fig. 30-2). In the United States and other countries, it is the most prevalent childhood chronic illness. It is disproportionately a disease of poverty, minority, and social disadvantage (Fig. 30-3). In the United States, for example, information prepared for the U.S. Surgeon General’s Workshop on Children and Oral Health in 2002 reported profound disparities in both oral health status and access to dental care by age, income, race, and parental education5 (Table 30-1). That report predicted that epidemiologic and demographic trends would drive childhood caries experience higher and would lead to additional stress on the dental delivery system that attends to poor and low-income children. Since that time, disease burden and inequities in its distribution have increased among young children. More U.S. children were born in 2007 than at the peak of the “baby boom” and further growth is anticipated to be disproportionate among minority, poor, and single-parent families whose children also experience higher caries rates and lower treatment rates. While caries experience among older children has declined, caries experience among 2- to 5-year-olds is at a record level of 28%, suggesting additional future stress on dental care capacity. Possible explanations for increasing disease burden among young children include nonclinical factors, among which are demographic changes, lesser availability of fluoride exposure because of increased use of nonfluoridated bottled water, changes in parenting styles and practices, and temporal changes in dietary practices. Dental service rates continue to be highest for children from higher income families while the publicly funded dental programs for poor and low-income children (Medicaid and the State Child Health Insurance Program), despite improvements, continue to reach only about a third of enrolled low- and modest-income children with dental services.

Tags: McDonald and Avery Dentistry for the Child and Adolescent 9e
Jan 14, 2015 | Posted by mrzezo in Pedodontics | Comments Off on 30: The Child in Contexts of Family, Community, and Society
Premium Wordpress Themes by UFO Themes
WordPress theme by UFO themes