The aim of this chapter is to describe the pharmacology of the drugs used for conscious sedation, with emphasis on their clinical effects.

After reading this chapter you should have a basic understanding of the pharmacology of inhalational, intravenous and oral drugs used in conscious sedation.

The safe administration of any drug requires a knowledge of its pharmacology, which is classically considered under the headings of pharmacokinetics and pharmacodynamics. These subjects are potentially highly complicated and confusing to the non-expert. Fortunately, dental sedationists need only a basic working knowledge of sedative agents and the drugs with which the agents may interact (Table 3-1).

The drugs most commonly used for dental sedation are the benzodiazepines for intravenous sedation and nitrous oxide and oxygen for inhalational sedation. These will be described in detail. Reference, however, will also be made to other agents and routes of administration which are being used and/or investigated for use in dentistry, including propofol and transmucosal benzodiazepines.

Drugs which produce conscious sedation and analgesia may be administered by a variety of methods. The choice of route depends on the drug itself, how quickly a response is required, and whether the effect is required locally or systemically. The various routes are:

Drugs administered by inhalation are absorbed by the pulmonary circulation. Parenteral (by injection) administration is, by contrast, much faster acting – emergency drugs are almost all given by this route. Oral administration may be more pleasant for a needle-phobic patient, but absorption is unpredictable and time-consuming because the rate of gastric emptying is altered by anxiety, disease, other drugs and the presence of food. Oral drugs are also subject to first-pass metabolism.

It is important to remember that whatever the route of administration, all sedative drugs travel to their target sites via the systemic circulation.

A consideration of the pharmacokinetics and pharmacodynamics of available sedative drugs is important when choosing the most appropriate agent for each individual patient. The degree of protein binding of a drug alters its availability. A portion of the drug administered is dissolved in plasma (the active form) whilst the rest is bound to plasma proteins and is not free to combine with receptor sites. Some disease processes change the proportion of bound drug. Similarly, two drugs can compete for the same binding site and thereby increase the free concentration of one or both agents. Either of these mechanisms may alter the expected clinical effects.

Drugs are eliminated by a variety of routes. Most of the inhalational agents used for sedation are excreted through the lungs. For benzodiazepines, the most important organs are the liver and the kidneys which metabolise and excrete these drugs. The measure of elimination of a drug is the half-life (see Table 3-1).

The properties and route of administration of different drugs determine the speed of absorption and distribution and hence the speed of onset of the sedative effect. A drug with rapid metabolism and excretion produces a swift recovery and earlier discharge for the patient.

Pharmacodynamics describes the effect the drug has on the patient and includes both desirable and undesirable effects. The definitions of both types of effect are not fixed, but depend upon individual circumstances and what one is trying to achieve. For example, midazolam can produce unconsciousness. In the case of conscious sedation, this pharmacodynamic property is clearly undesirable and potentially harmful. In contrast, an anaesthetist might choose midazolam to induce anaesthesia slowly and gently for a patient who has severe cardiac disease to avoid the cardiodepressant actions of other induction agents.

Most sedative drugs elicit a response via receptors which are specific to each drug. Receptors are located in cell membranes. When drugs bind to receptors in the CNS these are altered and the activity of the cell is either stimulated or inhibited. These drugs are called agonists. Midazolam is a benzodiazepine agonist. Drugs which act to displace agonists from the receptor sites thus terminating their effects are known as antagonists. Flumazenil is a benzodiazepine antagonist. A drug which binds to the receptor site to produce the opposite effect to an agonist is known as an inverse agonist. An example would be a drug which acts at benzodiazepine receptors to induce anxiety and alertness. However, it is doubtful that there would be much of a market for such an agent.

Properties of the Ideal Sedative Drug

The first clinically useful benzodiazepine, chlordiazepoxide (Librium®) was synthesised in the late 1950s by F Hoffman-La Roche & Co Ltd (Fig 3-1). All benzodiazepines have a common core structure with individual differences which determine their solubility and precise actions (Fig 3-2). Diazepam (Valium®) was introduced in clinical practice in 1963 and was first used for dental sedation in 1966 (Fig 3-3). Midazolam (Hypnovel®) became available in 1983 (Fig 3-4). Its advantages over diazepam soon made it the drug of choice for intravenous sedation for dentistry. Other benzodiazepines – for example, temazepam and lorazepam, have also been used to produce conscious sedation. 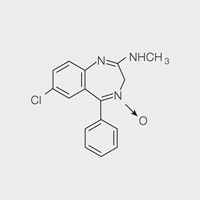 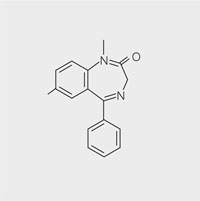 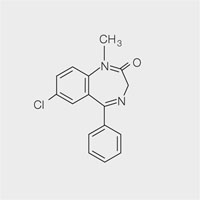 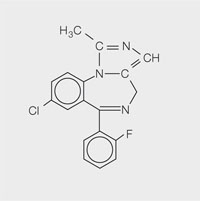 The benzodiazepine group of drugs has a number of desirable pharmacodynamic properties which make these agents useful for conscious sedation.

Another desirable therapeutic property of benzodiazepines is their anticonvulsant action.

For the sedationist, the most significant undesirable property of these drugs is respiratory depression, which, is usually easily managed but requires careful monitoring. Benzodiazepines have the potential to produce dependency as a result of long-term use or abuse. This is not a problem when midazolam is used for conscious sedation.

Diazepam produces excellent sedation and was for many years the drug of choice for dental sedation. However, it has a number of disadvantages which have resulted in its being superseded by midazolam. Diazepam is insoluble in water and the first commercially available preparation, Valium®, was made soluble by mixing it with the organic solvents propylene glycol, ethyl alcohol and sodium benzoate in benzoic acid. Intravenous administration of Valium® was frequently painful due to the presence of these solvents which sometimes also caused thrombophlebitis. An alternative preparation, Diazemuls® contains an oil-in-water emulsion, is non-irritant and does not damage veins.

Many practitioners considered that diazepam on its own was not sufficiently potent for extremely anxious patients or for those undergoing surgical procedures which led to the practice of adding an opioid to enhance the sedative effect. The most commonly used drug was pentazocine, marketed as Fortral®. This technique should now be regarded as of historical interest only since adequate sedation is usually easily achieved with midazolam alone. Midazolam is at least twice as potent a sedative as diazepam on a weight for weight basis.