The aim of this chapter is to outline the basic principles of physiology and anatomy which are relevant to conscious sedation.

After reading this chapter you should have an understanding of:

To understand fully the principles of safe sedation practice, it is necessary to review certain aspects of physiology, in particular, those relating to the respiratory and cardiovascular systems. A knowledge of the anatomy of the upper airway assists in airway management. Familiarity with the pattern of veins in the antecubital fossa and on the dorsum of the hand is essential for the administration of intravenous sedation.

The major function of the respiratory system is to ensure continuous effective gas exchange so that oxygen enters the bloodstream and carbon dioxide is removed.

Quiet breathing is characterised by the rhythmic expansion and relaxation of the lungs and thorax. The diaphragm is the most important muscle of respiration but the intercostal muscles contribute to the increase in the volume of the thorax during inspiration. The accessory muscles of inspiration are not used during quiet breathing. Expiration is normally a passive process resulting from the elastic recoil of the lungs. Active expiration, primarily involving the muscles of the anterior abdominal wall and the intercostal muscles, is seen during exercise and hyperventilation. 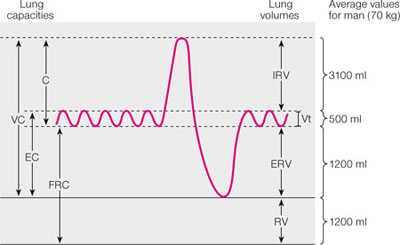 Minute volume is the product of the tidal volume and the respiratory rate. A normal adult at rest breathes approximately 12 times per minute. Thus, the minute volume for an adult is usually about 6 litres. These figures provide the sedationist with a physiological basis for estimating the initial fresh gas flow required when using inhalational sedation techniques.

The dead space volume refers to the portion of the airways which is not available for the exchange of gases. Dead space increases with age and reduction in cardiac output. The term alveolar ventilation is used to describe the volume of gas entering the alveoli each minute and taking part in gas exchange. It is important to recognise that a patient who has very shallow breathing (where the tidal volume is less than the dead space volume) is effectively not breathing at all. Hypoventilation is common following the administration of central nervous system (CNS) depressant drugs such as benzodiazepines and opioids.

Gas exchange occurs at the alveolar-capillary membrane, where only two or three cells separate alveolar gas from the bloodstream. Oxygen and carbon dioxide cross the alveolar membrane by diffusion. The rate of diffusion depends upon the:

Oxygen is removed by capillary blood and its rate of transfer is also dependent upon the rate of its chemical combination with haemoglobin. The rate of diffusion of carbon dioxide from capillary blood into the alveolus is 20 times more rapid than that of oxygen in the reverse direction.

Oxygen combines loosely and reversibly with haemoglobin. Each molecule of haemoglobin can combine with four atoms of oxygen, but the association of each atom alters the affinity of the haemoglobin molecule for subsequent oxygen atoms. This results in the characteristic sigmoid shape of the oxygen dissociation curve (Fig 2-2). The shape of the curve means that large amounts of oxygen are released to the tissues in response to relatively small falls in alveolar oxygen tension, thus maintaining optimum oxygenation of the tissues. 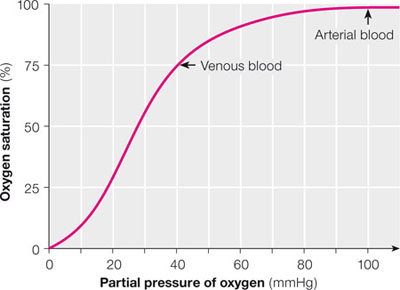 The oxygen dissociation curve shows the oxygen saturation of haemoglobin on the y-axis and the partial pressure of oxygen (oxygen tension) on the x-axis. The plateau at the top of the curve results from the saturation of the binding sites with oxygen. This provides a potential reserve of oxygen when the partial pressure of oxygen falls. The steep vertical section of the curve allows for optimum loading and unloading of oxygen.

During sedation a pulse oximeter is used to estimate the patient’s arterial oxygen saturation (the y-axis on the oxygen dissociation curve). However, the unremitting hunger of all the cells of the body for oxygen is only satisfied by a continuous supply and adequate partial pressure of oxygen (the x-axis on the curve). The shape of the dissociation curve determines the precise relationship of the axes and thus the relationship between the displayed arterial oxygen saturation (SaO2) and the quantity of oxygen available for cellular respiration. Careful consideration of the curve and the underlying biochemistry will demonstrate the significance of the recommendation that the SaO2 must be maintained above 90% throughout sedation and the immediate recovery period.