• Communicate with other health-care professionals

Assessment of the patient, consent and the question of preoperative screening are discussed in Chapter 2 and much of that discussion is relevant to this chapter. Integrated care pathways are increasingly used in many countries. In the UK, the National Patient Safety Agency (NPSA) and NHS Quality Improvement Scotland (NHS QIS) are responsible for overseeing this area.

Any form of surgery or invasion of bone or soft tissues causes inflammation, with variable pain and swelling and sometimes other sequelae; therefore it is crucial that benefits outweigh the risks and that the patient has given valid consent. Even a local anaesthetic (LA) injection can be followed by complications. LA complications and medico-legal complaints arising from them are rare but include persisting anaesthesia or paraesthesia. Most cases involve lingual and/or inferior alveolar nerve sensory loss. In one study of over 12 000 inferior alveolar nerve block injections, 0.15% resulted in some lingual sensory disturbance and 7% caused patients to experience an ‘electric shock’-type feeling in the tongue at the time of LA injection –almost certainly indicating needle nerve damage. However, all but 1 patient regained normal sensation within 6 months. Most LAs, in particular articaine and prilocaine, are also potentially neurotoxic, and a Danish study suggested that the main cause of injury was neurotoxicity resulting from administration of the LA rather than from needle penetration. Clinicians should consider avoiding high-concentration (4%) LA for block anaesthesia and avoiding articaine for block anaesthesia. Complications from conscious sedation (CS) and general anaesthesia (GA) are considered below.

Drug use can cause adverse reactions; some of the main adverse reactions, interactions and contraindications to drugs used in dentistry are shown in Chapter 29, Tables 3.1 and 3.2, and Appendices 3.1–3.3. It is important for clinicians only to undertake a procedure or use a drug when they are aware of the attendant interactions and adverse effects (as discussed in Ch. 29), and to be able to manage any emergency (Ch. 1) or other complications. Clinicians should work only within their field of competence. 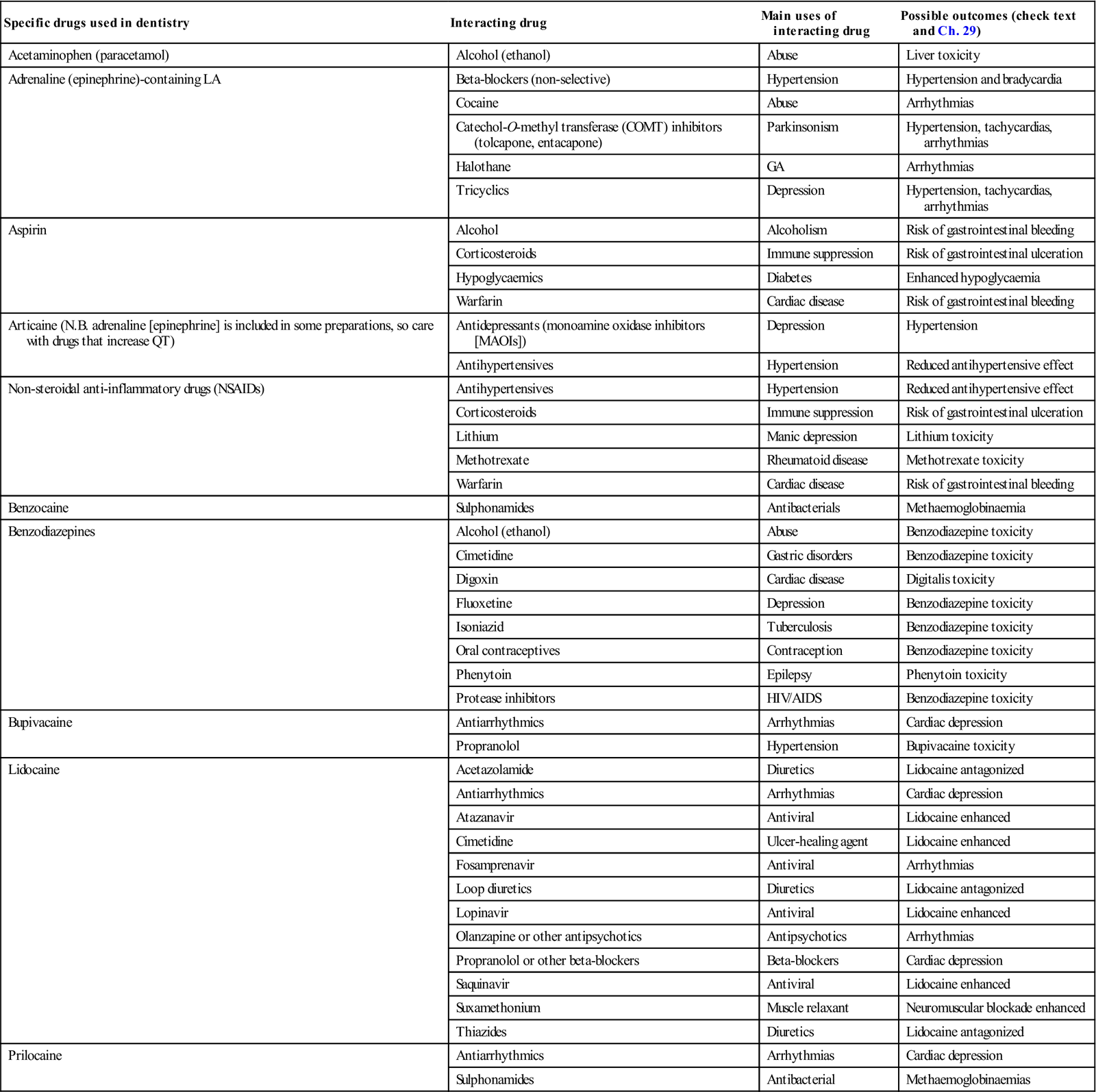 aN.B. There are many others; check text and appendices on drugs. ALWAYS check the British National Formulary or an equivalent source, as these lists cannot be complete; nor can their accuracy be guaranteed.

Finally, never alter a patient’s medication personally, even aspirin given by another health-care professional (HCP), as this is considered, at the least, discourteous and, at worst, to be practising medicine without a licence. Always consult the patient’s HCP.

Pain is an unpleasant sensory and/or emotional experience associated with actual or potential tissue damage. Pain is a complicated process that involves an intricate interplay between chemicals (neurotransmitters), which bind to neurotransmitter receptors (nociceptors) on cell surfaces. These function as gates or ports, enabling pain messages to pass through to cells. Normally, nociceptors only respond to strong, potentially harmful stimuli; however, chemicals from injured or inflamed tissues (Box 3.1) sensitize nociceptors, causing them to transmit pain signals in response to lesser stimuli. This is referred to as allodynia, a state in which pain is produced by innocuous stimuli such as light touch.

Pain is initiated with the activation of nociceptors at the free nerve endings of A-delta and C fibres, followed by transduction, whereby one form of energy (mechanical, thermal, chemical) is converted into another (electrical – nerve impulse). Lightly myelinated A-delta nerve fibres are responsible for sharp stabbing pain usually resulting from stimulation of mechanoreceptors (e.g. primary pain following acute injury). Stimulation of unmyelinated C-polymodal nerve fibres gives rise to pain described as dull, aching and poorly localized (e.g. infection, secondary pain following acute injury, visceral pain). Pain may be superficial or deep, and somatic, visceral or neuropathic, based on the site of action of the noxious stimulus.

Following transduction, neural impulses are carried along peripheral nerves to spinal cord and brainstem, which act as relay centres (where the pain signal can potentially be blocked, enhanced or otherwise modified). They continue through the thalamus (which also serves as the storage area for body images and plays a key role in relaying messages between the brain and various parts of the body) to the cerebral cortex, where pain perception occurs.

The main excitatory neurotransmitters for pain are substance P and glutamate. Inhibitory neurotransmitters include gamma-aminobutyric acid (GABA), serotonin, noradrenaline (norepinephrine) and opioid-like chemicals such as endorphins and enkephalins (which block pain by locking on to opioid receptors and switching on pain-inhibiting pathways or circuits). Endorphins (mu-opioids) may also be responsible for the ‘feel-good’ effects experienced after vigorous exercise.

It must be borne in mind that pain has emotional, sensory, behavioural and cognitive components, and can be influenced by temperament, context, experience, pain sensitivity, coping skills and cognitive development, and also by biological, psychological and cultural factors.

Prevention and treatment of pain and suffering are essential. Furthermore, adequate pain control during a clinical procedure may also make management and pain control far easier for future health-care procedures. Pre-emptive analgesia is the clinical concept of introducing analgesic management before the onset of noxious stimuli, which helps to prevent pain potentiation. Reassurance, explanation, a calm environment and gentle handling will help but frequently need to be supplemented with analgesics, hypnosis, LA, CS (oral, inhalational or intravenous) or GA.

Analgesics may act at different levels of the pain transmission pathway. Aspirin and other non-steroidal anti-inflammatory agents (NSAIDs), paracetamol (acetaminophen), corticosteroids and LA act peripherally, while some other agents, such as opioids, act on the central nervous system (CNS). Neurogenic pain, originating in damaged C fibres, may also respond to membrane-stabilizing drugs, such as anticonvulsants (e.g. carbamazepine). Tricyclic antidepressants (e.g. amitriptyline) also have a role in the modulation of pain pathways. Muscle relaxants, such as benzodiazepines and hypnosis, may be indicated for pain related to muscle spasm. Analgesic drug use, contraindications and potential adverse reactions and interactions are fully discussed in Chapter 29 (see also Appendices 3.1, 3.2 and 3.3) but Table 3.1 summarizes the main problems relevant to dentistry. Box 27.9 shows drugs whose action may be affected by grapefruit, and Box 27.10 drugs enhanced by pomegranate.

Non-opioid analgesics are commonly used (Tables 3.3 and 3.6). NSAIDs act peripherally and are equi-analgesic with centrally acting weak opioids such as codeine. NSAIDs act by blocking cyclo-oxygenase (COX), which converts arachidonic acid to prostaglandins (PGs) that are involved in inflammation and pain. Other PGs stimulate protective gastric mucus secretion, blood platelet formation and renal excretion – and thus there can be dysfunction in these. A wide range of NSAIDs is available (Table 3.4). Most block COX-1 in particular, which is responsible for the PGs affecting stomach, platelets and kidneys – and they can thus also damage the stomach and interfere with haemostasis and renal function (Fig. 3.1 and Box 3.2). All NSAIDs can cause serious gastrointestinal effects; azapropozone confers the highest risk and ibuprofen the lowest. NSAIDs cause gastric irritation, ulceration and bleeding, especially in older individuals and patients taking corticosteroids. Piroxicam use is thus now limited to treatment by specialists – of osteoarthritis, rheumatoid arthritis and ankylosing spondylitis. Ketoprofen and ketorolac also have significant gastrointestinal adverse effects. NSAIDs should not be used in patients with current or past peptic ulcers, and not given in combinations. They can also worsen asthma and are contraindicated in pregnancy and in older patients. They inhibit platelet function, but most do so reversibly and therefore prolong the bleeding time only for the life of the drug (typically 48–72 hours). NSAIDs can interact with lithium to cause lithium toxicity. They also block renal PG synthesis and may lead to acute renal failure, particularly in older patients with cardiac failure and those with renal damage, such as diabetic nephropathy. In these groups, renal function should be monitored. Aspirin is a typical NSAID, which has the effects described above but also irreversibly inhibits platelet function and therefore causes a prolonged bleeding time for the life of the platelets (about 7–8 days minimum).

aThere are many other NSAIDs (see Table 3.4). 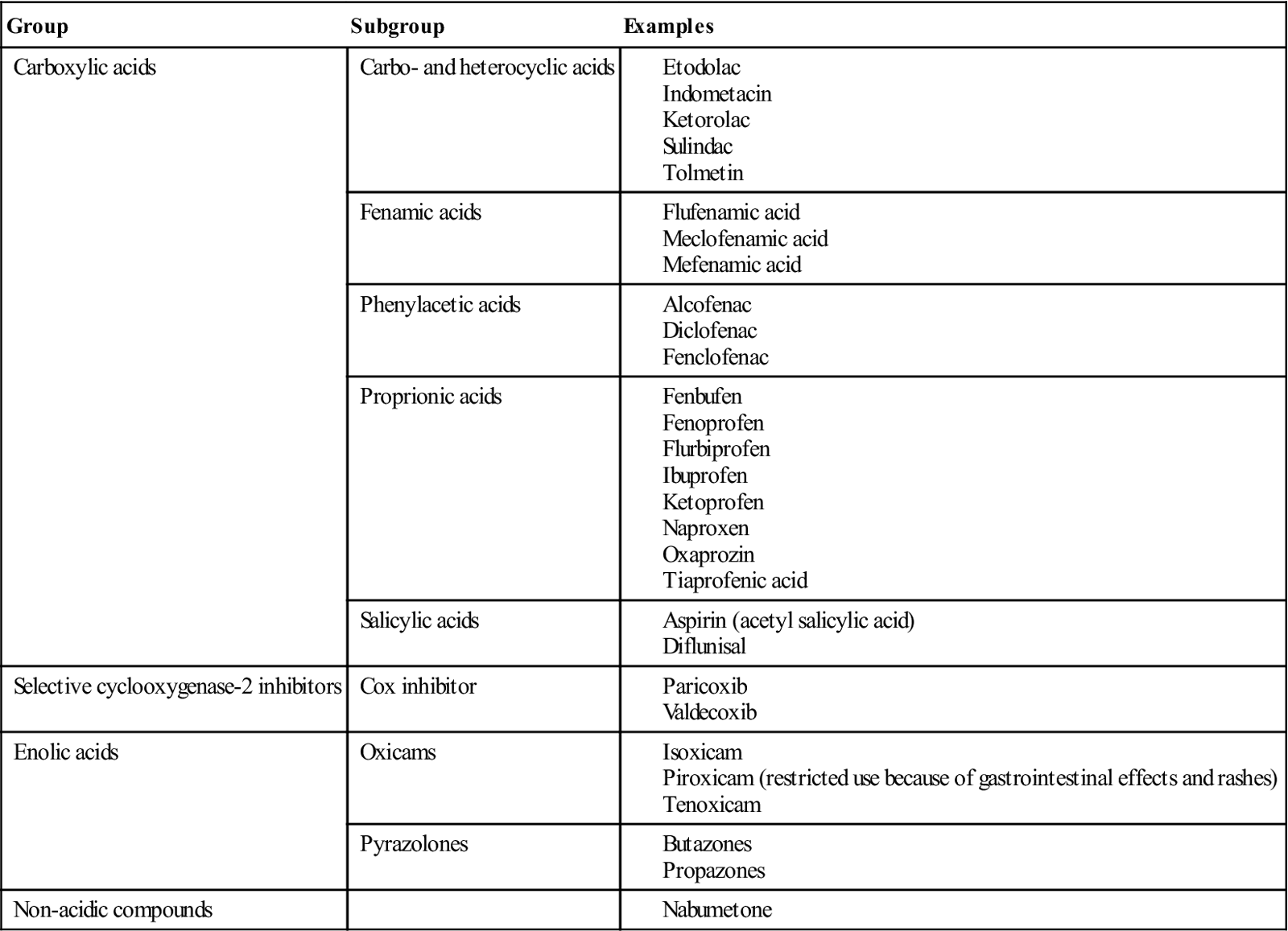 Misoprostol, H2 antagonists or proton pump inhibitors can help protect the stomach in NSAID use. However, NSAIDs that act as COX-2 inhibitors, such as celecoxib and rofecoxib, spare the COX-1 enzyme and thus cause less gastric damage; they do not affect platelets and are preferred for patients with peptic ulceration, but are contraindicated in cardiac disease and should not be used together with aspirin. COX-2 inhibitors have much less effect on the stomach, platelets and kidneys but, unfortunately, are also associated with a thrombotic risk (e.g. myocardial infarction and stroke), as are non-selective NSAIDs such as diclofenac and ibuprofen, especially when used at high doses and for long periods. Rofecoxib increases the risk of myocardial infarction and has thus been withdrawn.

Paracetamol (acetaminophen; N-acetyl-para-aminophenol; APAP) has approximately the same analgesic activity as aspirin; it is a useful analgesic and antipyretic (reduces fever) but has no anti-inflammatory activity. Paracetamol appears to act by reducing the oxidized form of the COX enzyme, preventing it from forming pro-inflammatory cytokines, and it also modulates the endogenous cannabinoid system. Paracetamol is metabolized by the liver and by P450 enzymes, responsible for its toxic effects due to a minor alkylating metabolite (N-acetyl-p-benzoquinone imine, abbreviated as NAPQ1). Paracetamol causes no gastric irritation and is remarkably safe but, in overdose, it can cause liver damage. It accounts for most drug overdoses in the resource-rich world. Up to 4 g daily is the maximum dose for an adult, but toxicity is increased by starvation and by alcohol, anticonvulsants, barbiturates and possibly zidovudine. Co-methiamol is a combination tablet of paracetamol with methionine included to ensure that sufficient levels of glutathione in the liver are maintained in order to minimize the liver damage if an overdose is taken.

If an NSAID or paracetamol (acetaminophen) fails to control pain, an opioid may be indicated (Tables 3.5 and 3.6). Opioids activate the mu1 receptor in the CNS that is responsible for analgesia. Weak oral opioids, such as codeine (methylmorphine), act centrally to provide useful analgesia. The analgesic efficacy of codeine is partly dependent on its O-demethylation to morphine via cytochrome P450, which exhibits genetic polymorphism, and therefore the degree of pain relief and the adverse effects may vary significantly between individuals. It is thus contraindicated in children (www.fda.gov/Safety/MedWatch/default.htm; accessed 30 September 2013). Despite this, codeine is widely used for postoperative pain relief in adults, at a dose of 30–60 mg, often in combination with paracetamol. 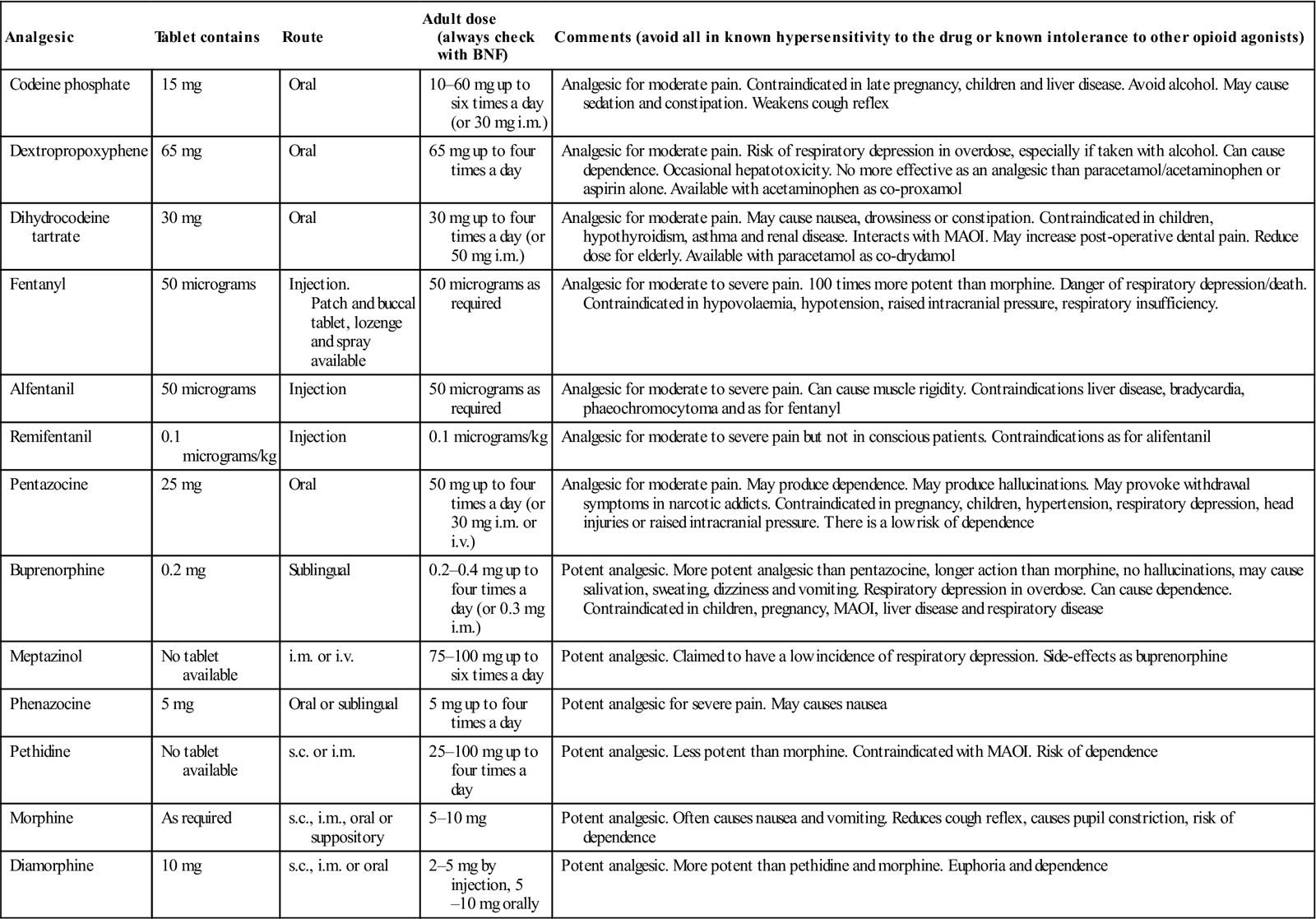