• Outline the periods of prenatal development, describing the major events that occur during the early weeks.

• Integrate a background on prenatal development into the development of the face, neck, and oral structures and developmental disturbances associated with these structures.

It is important for dental professionals to have an understanding of the major events of prenatal development in order to understand the development of the structures of the face, neck, and oral cavity and the underlying relationships among these structures.

Prenatal development begins with the start of pregnancy and continues until the birth of the child; the nine months of gestation is usually divided into three-month time spans or trimesters. Embryology is the study of prenatal development and is introduced in this first chapter of Unit II. Prenatal development consists of three distinct successive periods: preimplantation period, embryonic period, and fetal period (Table 3-1). The preimplantation period and the embryonic period make up the first trimester of the pregnancy, and the fetal period constitutes the last two trimesters. 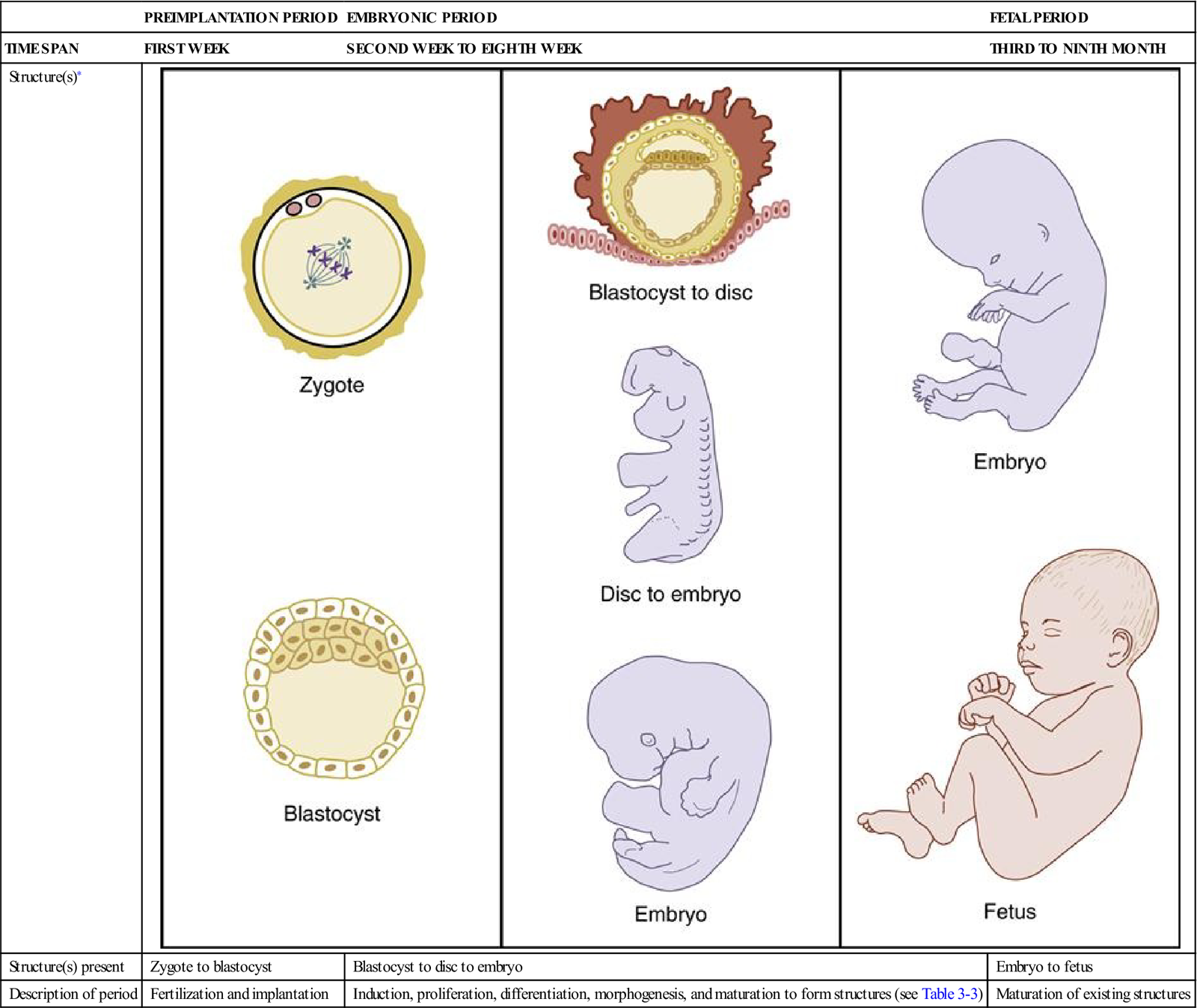 ∗Note that structure size is not accurate or comparative.

Each of these structures of the face, neck, and oral cavity has a primordium, the earliest indication of a tissue types or an organ during prenatal development. This information about the embryological background of a structure also helps in the appreciation of any developmental considerations that may occur in these structures, especially if any disturbances occur.

These developmental disturbances can include congenital malformations, or birth defects, which are evident at birth. Most of these occur during both the preimplantation period and the embryonic period and thus involve the first trimester of the pregnancy (discussed later). Such malformations occur in 3 out of 100 cases, and are one of the leading causes of infant death. This does not include anatomical variants, which are common, such as variation in the lesser details of a bone’s shape.

Malformations can be due to genetic factors, such as chromosome abnormalities or environmental agents and factors. These environmental agents and factors can include infections, drugs, and radiation and are considered to be teratogens (Table 3-2). Females of reproductive age should avoid teratogens to protect the developing infant from possible malformations (discussed later).

∗Note that diagnostic levels of radiation such in the dental setting should be avoided when pregnant but have not been directly linked to congenital malformations.

Malformations in the face, neck, and oral cavity range from a serious cleft in the face or palatal region to small deficiencies of the soft palate or developing cysts underneath an otherwise intact oral mucosa. It is important for dental professionals to remember that any orofacial congenital malformations discovered when examining a patient are usually understandable and traceable to a specific time in the embryological development of the individual. Thus, the dental professional must initially understand the development of an individual’s orofacial region, including its sequential process to later understand any associated pathology present.

The first period, the preimplantation period of prenatal development, takes place during the first week after conception. At the beginning of the first week, conception takes place, a female’s ovum is penetrated by and united with a male’s sperm during fertilization (Figure 3-1). This union of the ovum and sperm subsequently forms a fertilized egg, or zygote.

During fertilization, the final stages of meiosis occur in the ovum. The result of this process is the joining of the ovum’s chromosomes with those of the sperm. This joining of chromosomes from both biological parents forms a new individual with “shuffled” chromosomes. To allow this formation of a new individual, the sperm and ovum are joined, resulting in the proper number of chromosomes (diploid number of 46). If both these cells, sperm and ovum, instead carried the full complement of chromosomes, fertilization would result in a zygote with two times the proper number, resulting in severe congenital malformations and prenatal death.

This situation of excess chromosomes is avoided with meiosis, because, during their development in the gonads, this process enables the ovum and sperm to reduce by one half the normal number of chromosomes (to haploid number of 23). Thus, the zygote has received half its chromosomes from the female and half from the male, with the resultant genetic material a reflection of both biological parents. The photographic analysis of a person’s c/>