The two most common dental diseases in children and adolescents, dental caries and erosion both have strong dietary components in their causation. Dental caries is increasing even in long-term fluoridated communities in Western society, and dental erosion is manifesting as the new disorder resulting in toothwear. Dental erosion is increasing in children, adolescents and teenagers, and in many cases, it is a lifestyle issue where specific causation related to dietary intake and conditions producing dehydration can be identified. Dietary counselling in dental practice can have a major impact on addressing both dental erosion and dental caries.

Dental erosion is commonly found in these age groups. The extent of the problem was described more than 15 years ago when over 17 000 children were assessed in the UK 1993 National Survey of Children’s Dental Health: 52% of 5- to 6-year-olds were found to have one or more eroded primary incisors and 24% of these lesions extended into the dentine; 27% of 12-year-olds showed signs of erosion with 1% of the erosive lesions involving dentine (O’Brien 1994). More recent studies in various countries have made similar observations.

CONCERNS OF PATIENTS AND PARENTS

In the young child, the parents may become concerned when the child resists oral hygiene because the teeth are sensitive to hot or cold water, toothpaste and toothbrushing. Closer inspection of the teeth by the parents may reveal some loss of tooth structure and discolouration. On occasion, the parents may notice that the teeth, especially primary incisors, appear to have become shorter in length and worn down. A change in the child’s smile and smile line may be noticed, with a reduction in the amount of tooth surface that is visible. Concerned that the permanent incisors may become similarly affected, the parents seek professional dental advice.

Initially, erosion may appear as a glazed enamel surface with loss of surface features such as perikymata. Early lesions are usually coronal, and the enamel at the gingival margin remains intact, perhaps protected by saliva and gingival crevicular fluid. However, it is difficult to show the patient and the parents that saliva from the major glands protects the surfaces of the deciduous teeth due to absence of cervical lesions (Young & Khan 2002). The patient may present complaining of tooth sensitivity associated with loss of tooth structure. Maxillary anterior teeth of affected primary dentitions show reduction in vertical height and thin, chipped incisal edges. The incisal edges of primary incisors and canines become worn down fully into dentine, and a concave surface is formed as the less mineralised dentine erodes more rapidly than the surrounding enamel. In older children, the palatal surfaces of permanent incisors may show loss of enamel with sharply defined gingival margins. Grey or brown coronal colour changes, visible particularly on the palatal surfaces, may indicate pulpal pathology. The enamel is thinned, and the underlying dentine is visible as yellow or brown. Oval lesions representing pulpal proximity may be visible and the lesions may progress to pulpal exposure.

A number of dietary findings are common in the histories of individuals with erosion. High intakes, both in frequency and in volume, of acidic drinks in particular are noted. These include carbonated soft drinks, fruit juices, juice-flavoured drinks, citrus-flavoured mineral waters, citrus-flavoured cordials and sports drinks. Citrus fruits and spicy snack foods (such as Asian or Mexican snacks) are also reported frequently. Histories may also include medications taken orally that can linger in the mouth and be retained on the teeth, such as asthma powder inhalants, and prolonged holding of vitamin C tablets in the mouth, slowly chewing and swishing them before swallowing.

Soft drinks have little nutritional value, contain high amounts of sugar and are classified as an ‘extrafood’ to be consumed only occasionally or in small amounts (National Health and Medical Research Council [NHMRC] Australian Government 2005). In addition to acids, soft drinks contain simple sugars (glucose, fructose, sucrose, maltose and lactose) which can serve as metabolic substrates for cariogenic bacteria. A can (375 mL) of soft drink in Australia may contain 10 teaspoons of sugar, while in the United States, a can (345 mL) of regular soft drink is labelled to contain up to 11 teaspoons of sugar.

Sports drinks are recommended widely by organisations for athletes as sources of carbohydrates, electrolytes and water for energy and rehydration and are consumed frequently during or following athletic events. During strenuous exercise, salivary gland function is unable to meet the metabolic demands and the oral mucosa becomes dehydrated. The enamel is then largely unprotected by saliva and is susceptible to erosive risk from acidic sports drinks. A study of Australian university students participating in a variety of athletic clubs found signi-ficant associations between their reported dental erosion, tooth sensitivity and age and their frequency of drinking juices and sports drinks (Sirimaharaj et al. 2002).

Sports drink consumption is no longer solely the habit of high-performance athletes; such drinks are consumed frequently following less demanding exercise, such as gardening, or as recreational or social drinks. Erosion from sports drinks is therefore no longer limited to elite athletes.

Juices, regular sugared soft drinks, diet soft drinks, fruit-flavoured drinks and sports drinks can all erode enamel. The enamel dissolution by soft drink acids can exceed the effects of bacterial acids from metabolism of sugars in the drink. The pH range of most fruit juices, soft drinks and sports drinks is 2.5–4.5, which is below the critical pH range associated with demineralisation of enamel under ambient concentrations of salivary calcium and phosphate (see Chapter 5). Of importance in dietary counselling, regular sugared and diet soft drinks have similar erosive potential. Sports drinks and cola drinks have an immediate erosive potential tenfold higher than that of fruit juices (Jensdottir et al. 2006).

Regular sugared and diet soft drinks have high titratable acidity (TA). TA is deemed more important than pH in determining the erosive potential of a drink. TA determines the amount of hydrogen ions available to interact with the enamel surface. Foods and drinks can have similar pH values, but vary in erosive potential due to differing values for TA. In the laboratory, TA is measured as the volume of base (e.g. sodium hydroxide) required to neutralise the acidity to a given pH (typically 7). For example, a greater volume of base may be required for orange juice than for a cola drink. Therefore, the TA of the orange juice is greater than that of the cola drink, indicating a greater potential for erosivity. In addition, acids have pKa values, which describe how readily hydrogen ions can dissociate from compounds, indicating the amount of acid available. Relatively low pKa values, e.g. for citric acid, indicate that hydrogen ions can readily dissociate in this acid.

Diluting an acidic drink with water reduces the erosivity of the drink by lowering the TA, but has little effect on pH. Diluting fruit drinks with water up to a ratio of 1:15 has been found to raise pH values significantly, but even greater dilution is required to reduce overall acidity. This approach is impractical for it diminishes the palatability of the drink (Hunter et al. 2008). At higher temperatures the erosivity of acidic drinks is increased, associated with decreased pH, decreased enamel hardness and increased depth of erosive lesions (Barbour et al. 2006). Of importance then in dietary counselling, individuals choosing to consume acidic drinks should be advised to drink these chilled.

Sports drinks have low pH values and high TA values. Laboratory studies of the effect of sports drinks on enamel have shown that the initial erosive effect is demineralisation, apparent as a pre-softening of the surface enamel. The processes of oral hygiene and masticatory forces on the enamel then lead to attrition with loss of superficial enamel. Repeated application of a sports drink produces deeper enamel loss. An in vitro study has shown that adding low concentrations of casein phosphopeptide-amorphous calcium phosphate (CPP-ACP, 0.1–0.2% w/v) to four citric-flavoured soft drinks significantly decreased erosive depths of enamel (Manton et al. 2008). Adding CPP-ACP to a sports drink decreased the erosion potential, attributed to raising the pH and decreasing the TA of the modified drink (Ramalingam et al. 2005). Preliminary studies have shown that supplementing sports drinks with CPP-ACP had no discernible effect on the taste of the product as determined by a taste panel (Ramalingam et al. 2005).

DENTAL EROSION AS A LIFESTYLE ISSUE

Changes in societal behaviours over the last 30 years have increased availability and access to fast food, processed foods and drinks. Today in Western societies, fewer meals are eaten together in families and there is increasing reliance on meals eaten away from home. A great increase in availability and consumption of acidic drinks has occurred – including carbonated soft drinks, fruit juices, juice-flavoured drinks, citrus-flavoured mineral waters and sports drinks – by children, adolescents and teenagers. This has been accompanied by advertising and promotion, much of which is directed towards young people.

The clinical presentation of a child with asthma is illustrated in Fig. 3.1. Asthma is a common condition in children, adolescents and teenagers, and poses particular erosive risk. Both erosion and asthma appear to be increasing in Western societies. The child with asthma is often thirsty, and the acidic anti-inflammatory aerosol medications used in treatment may be dispersed onto the teeth and soft tissues in addition to the pharynx. Wanting to immediately overcome the taste of the medication and reduce their dehydration, the child with asthma favours drinking acidic drinks in preference to water.

Figure 3.1 Severe dental erosion on the primary dentition of a 10-year-old girl with moderately severe asthma controlled twice daily with corticosteroids and long-acting beta-2 agonists and relieved with 5 mL of salbutamol nebuliser as required. Her cervical lymph nodes were tender secondary to an upper respiratory infection. Near pulp exposures on her maxillary primary canines and first molar. The second primary molars were less affected and the margins of the restoration on tooth 74 were elevated. Wear on her permanent teeth was negligible. 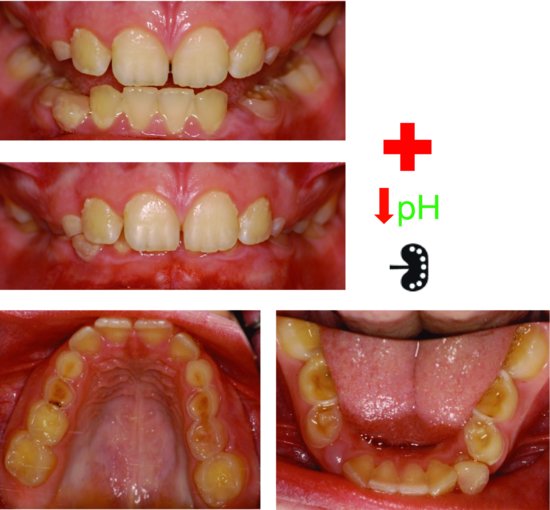 The beta-2 adrenoceptor agonists used in asthma management reduce salivary flow and thereby reduce its acid-buffering capacity, so the acidic drink is not well buffered in the mouth. Instead of reaching for acidic drinks after using these medications, the individual with asthma should be encouraged to drink water for rehydration and rinse thoroughly with water to minimise the erosive potential of the medications. To further complicate matters, one of possible side effects of asthma medications is gastric reflux and hence intrinsic acids.

One of the key presentations of diabetes mellitus in a child is constant thirst. Children are more likely to be recommended sugar-free drinks than water, with the consequent risk of erosion. Alternatively, sweet drinks may have been recommended by other he/>