29: The Dynamics of Change

The Dynamics of Change

Epidemiology and Mechanisms of Dental Disease

Epidemiology of Caries in the Transitional Dentition

The median (50th percentile) weight and height of 6-year-old boys in the United States are 47.5 pounds and 45.5 inches, whereas the same medians for girls are 46 pounds and 45 inches. By the time children reach age 12 years, boys will be 90 pounds and 59 inches, and girls will be 90.25 pounds and 59.5 inches. This is a time of substantial continuous growth.1

During the period between the ages of 6 and 12 years, boys as a group are generally slightly taller than girls until around age 10 years. From age 10 years to around age 15 years, girls are slightly taller than boys. From a weight standpoint, boys are slightly heavier than girls until around age 11 years, when girls overtake boys in weight for a brief time. Although it is generally assumed that girls are a couple of years ahead of boys in their sexual and general maturation, that is really an overstatement due to the observability of the changes taking place. The real difference is actually about 1 year. This is because height and breast development are considered the main markers of female development compared with penis, scrotum, and height development in males. Nonetheless, the pregrowth spurt of males is steady and creates a larger platform upon which to launch the more robust spurt as compared with females. This accounts for the larger terminal size of males, in general, to females.

The period from age 6 through 12 years represent a continuous progression of the growth in the head and neck. From age 5 to 10 years (approximately the age range of interest here), neural and cranial growth are found to be almost entirely complete (Figure 29-1). During this same age span, the jaws (maxilla = A = 2 and mandible = B = 3 of Figure 29-1) grow at a faster rate than the cranium. 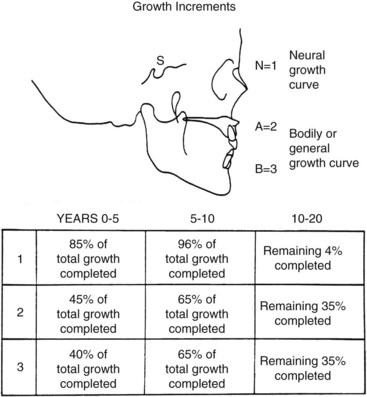 Using the Bolton standards for illustrative purposes,2 nasal projection and increased mandibular prominence are demonstrated (Figure 29-2). The nasal cartilage and mandibular condyle continue to grow by endochondral bone formation for some time, although the female mandibular growth spurt is most likely completed during this time period, and the male’s is yet to come. Growth modification can therefore be performed in this age group. Changes in cranial base length caused by endochondral bone formation at the sphenooccipital synchondrosis cease in early adolescence, but some appositional changes continue to occur at the basion and nasion. Vertically, there is a continued lowering of the palatal vault with sutural growth and apposition on the oral side of the palate and resorption on the nasal side as the intramembranous process of bone formation continues. Vertical facial growth is also complemented by dentoalveolar growth as the permanent teeth erupt and the alveolar ridges develop. 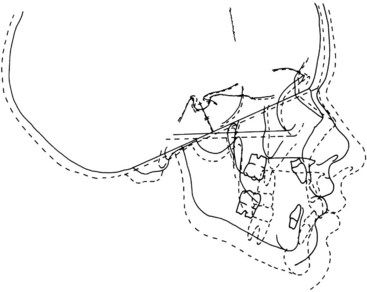 FIGURE 29-2 This anterior cranial base superimposition of the Bolton standard for 6- and 12-year-olds (solid line and dashed line, respectively) demonstrates the magnitude of anteroposterior and vertical skeletal growth during this period as well as the soft tissue change. (Redrawn from Broadbent BH Sr, Broadbent BH Jr, Golden WH: Bolton standards of developmental growth, St Louis, 1975, Mosby.)

In the transverse plane, there is continued growth at the midpalatal suture. Most transverse palatal sutural growth in completed for females during this period when the first bridging of the suture occurs. Transverse appositional widening of the alveolar ridge occurs with eruption of the permanent teeth. Widening of the anterior arch accompanies lateral incisor eruption and is followed by width increases in the canines and premolars (Figure 29-3). 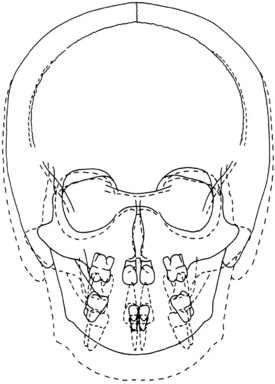 The implications of these changes are that anteroposterior growth modification for class III problems should be attempted during this time. For class II problems, growth modification can be attempted now or during early adolescence with equivalent results. Transverse changes should have been made using lingual arch type appliances unless rapid palatal expansion is going to be used with greater forces to interrupt the stable midpalatal suture. Vertical growth will continue in the face until much later.

Early during this period of time, many children experience the eruption of all four first permanent molars and the exfoliation of the mandibular and maxillary primary central and lateral incisors with a subsequent eruption of permanent incisors between the ages of 6 and 7 years (see Table 12-5). The maxillary permanent lateral incisors may erupt later than age 7 years in some children. The eruption of the anterior teeth should be carefully and easily observed by the practitioner for developmental and esthetic reasons.

With the exception of the third molars, all of the permanent teeth usually have erupted by the end of the twelfth year, and the enamel of all of the permanent teeth is complete by age 8 years. In the mandibular arch and following the first permanent molars and central incisors, the teeth erupt in immediate succession, that is, centrals, laterals, canines, first and second premolars, and second permanent molars from 6 to 7 years through 11 to 13 years of age. The same sequence takes place in the maxillary arch except for the maxillary canine, which usually erupts after the one or both premolars and at about the same time as or before the eruption of the second permanent molars (Figure 29-4). 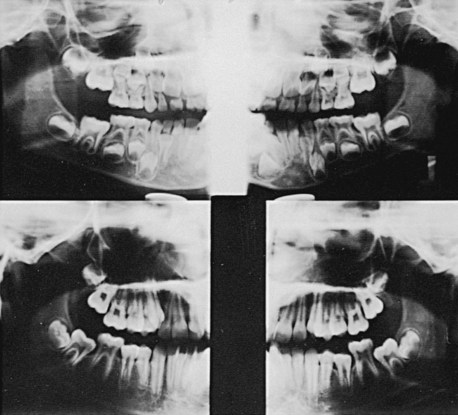 FIGURE 29-4 These two panoramic radiographs show the transition from the beginning of the permanent dentition to its completion with the exception of the third molars.

Because the position of the dental lamina of the permanent teeth is located to the lingual of all of the primary teeth (except for the dental lamina coming off the second primary for the three permanent molars), the anterior teeth develop in their vault or crypt lingual to and near the apex of the primary incisors. When the roots begin to form on the permanent teeth, they start to migrate to the oral cavity. Generally, they follow a pattern such that they come across the primary root, resorbing it and erupting slightly lingual to the location sustained by the primary tooth (Figure 29-5). Ultimately, the permanent teeth are usually angulated more buccally compared with their primary predecessors (Figure 29-6). The developing premolars develop between the roots of the primary molars and continue to erupt in a slightly buccal position. 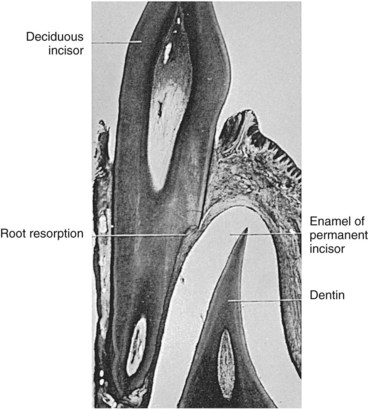 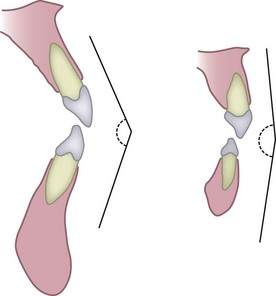 It is normal to find diastemas between the primary incisors. This helps provide space for the larger permanent incisors. The permanent canine in the maxillary arch is usually the last permanent tooth to erupt mesial to the first permanent molar. As the permanent canine begins to erupt, it migrates down the distal root surface of the maxillary lateral incisor and ultimately moves the crowns of the incisors mesially and will close moderate to small diastemas. This period of development has been called the “ugly duckling stage” (Figure 29-7).4 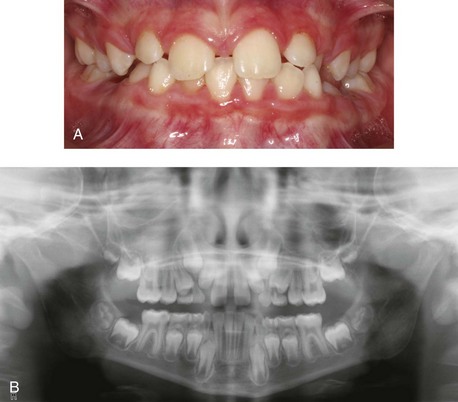 Most of the eruption problems occur during this time period, since few occur in the primary dentition. Ectopic eruption of permanent first molars, ectopic eruption of lateral incisors due to positioning or crowding, ectopic canine eruption, and transpositions all can be traced to this period of development. Obviously, monitoring and intervention of these conditions is crucial to a normally developing dentition. Also, early and sustained indications of crowding forcing decisions regarding extraction of primary and permanent teeth or nonextraction sometimes accompanied by space management are required. By the end of this period, most of the residual space resulting from either idiopathic spacing or leeway spacing has closed. Further eruption and drift occur in response to continued growth.

A book could easily be written describing the incredible cognitive acquisitions, adjustments, and sophisticated changes occurring in a child from age 6 to age 12 years. Mental capacity alone grows extensively. Unquestionably, the attention span of the child older than 7 years is substantially greater than that of the child younger than 5 years.

The school-aged years of 6 to 12 are when a child becomes literate. Before age 6 years, few children can do much more than print their names. After age 12 years most children have accomplished an appropriate approach to grammar and syntax and have the ability to produce increasingly sophisticated oral and written communications. In some parts of the world it is not uncommon for a child to be fluent in a second language by age 12 years.

According to Piaget,5 the ages between 6 and 12 years roughly approximate the third major developmental stage of cognition, that is, the phase of concrete operations. Piaget proposed the following four major periods of intellectual development:

So far this book has presented a study of the child through the sensorimotor and preoperational stages. In the concrete operations stage, Piaget described numerous sophisticated changes in the child’s mental abilities. For instance, the 5-year-old may be able to walk “two blocks down, one block right to the second white house” to get to his or her aunt’s residence, but the same 5-year-old could not draw this route on a piece of paper. However, by age 7 or 8 years, the child could portray the route on a self-drawn map. In other words, mental representations of actions become a part of the cognitive abilities of the child during these years. For the dentist who communicates with children it will be helpful to design discussions based on the child’s mental representation ability.

During the years from 6 to 12 (7 to 12, according to Piaget), children acquire the ability to understand the constancies between length, mass, number, and weight despite external differences. Relativity also emerges in the child’s evaluation system. To the 4-year-old, the word “dark” means black. The 10-year-old can talk about a “dark” green car. In summary, the child between the ages of 6 to 12 years grows up cognitively. By the age of 12 years, mind and mental prowess have matured, and real as well as theoretical or abstract information can be assimilated.

The period from 6 to 12 years is one of matriculation toward the acceptance by the child of societal norms of behavior. Crying, tantrums, and other rages will, in normal children, be relinquished as possible modes of expression of frustration. Whereas the preschooler needs and perhaps demands immediate rewards and satisfaction, the child in the transitional years masters the emotional ability to delay gratification. This awareness of delay is reinforced by the child’s schooling, and increasingly the child is guided toward the appropriate investment of his or her time in worthwhile activities. Homework, household chores, caring for pets, delivering newspapers, scouting, team sports, and piano lessons are some of the behaviors expected of this age group, which were almost impossible during the preschool years.

Another emotional refinement that is developed from age 6 to 12 years is the ability to use life’s tasks to effectively stave off boredom. Previously, the preschooler immersed his mind in an activity until all his energy and attention were spent. Then, at the point of burnout, he looked to his parents or other attendants to find something else for h/>