Mental disorders are common in today’s society. Approximately one third of the population in the United States will have at least one psychiatric disorder during their lifetime, and 20% to 30% of adults in the United States will experience one or more psychiatric disorders during a 1-year period. About 5% of the population suffers from serious affective or mood disorders. Schizophrenic disorders are reported in 1.1%.< ?xml:namespace prefix = "mbp" />1–4

Psychiatric problems, which can affect the clinical course in various medical illnesses, increase required duration of treatment, decrease the patient’s functional level, and have a negative impact on overall prognosis and outcome. Disorders related to drug and alcohol use account for a significant proportion of the treatment-related psychiatric issues. In the elderly population, a high prevalence of psychiatric complications is associated with medical illness. About 11% to 15% of these patients experience depressive symptoms, and between 10% and 20% have anxiety disorders, including phobias. Phobia is the most common psychiatric disorder in women older than 65 years of age. Approximately 20% of elderly persons have a substance abuse disorder.5 The prevalence of psychiatric disorders among adult dental patients seeking treatment at the Virginia Commonwealth University School of Dentistry was found to be 28% of a randomly selected patient group of 442.6 The most common disorder reported was depression.6

This chapter provides an overview of mood disorders, somatoform disorders, and schizophrenia, with an emphasis on drugs used to treat these conditions and their significant adverse reactions and interactions with drugs used in dentistry. Also discussed are specific considerations in the dental management of patients with these disorders.

Mood disorders represent a heterogeneous group of mental disorders that are characterized by extreme exaggeration and disturbance of mood and affect. These disorders are associated with physiologic, cognitive, and psychomotor dysfunction. Mood disorders, which tend to be cyclic, include depression and bipolar disorder.3,4,7,8

About 5% of the adults in the United States have a significant mood disorder. Mood disorders are more common among women (Table 29-1). Major depression may begin at any age, but the prevalence is highest among elderly persons, followed by those 30 to 40 years of age and, in recent years, an increased number of 15- to 19-year-olds.9 Lifetime prevalence rates for major depressive disorders are 15% to 20%.4 Point prevalence rates for major depression in urban U.S populations are 2% to 4% for men and 4% to 6% for women.4 After the age of 55 years, depression starts to occur more commonly in men.9 About one third of depressed persons require hospitalization; 30% follow a chronic course with residual symptoms and social impairment.3,4,9,10

The prevalence of major depression is fairly consistent across races and cultures. However, this disorder occurs with greater frequency among recent immigrants and the displaced.9 No evidence suggests significant geographic variability, except in seasonal affective disorder, which is due to limited exposure to the sun during the winter in the northern states. No clear association with social class has been found, but major depression is associated with poverty and unemployment as significant stressors.9 Risk factors include current stress burden; history of early trauma, neglect, abuse, or deprivation; personal and family history of mood and anxiety disorders; medical and psychiatric disorders; and personality disorder.10

Several theories have been presented to explain the origin of mood disorders. Reduced brain concentrations of norepinephrine and serotonin (neurotransmitters) for some time have been believed to cause depression. Increased levels of these neurotransmitters have contributed to the onset of mania. The causes of depression and mania now appear to be complex.4,8,10 Current research focuses on the interactions of norepinephrine and serotonin with a variety of other brain systems and on abnormalities in the function or quantity of receptors for these transmitters. Thyrotropin release of thyroid-stimulating hormone and cortisol release by corticotropin-releasing factor and adrenocorticotropin over a long period may be associated with the development of depression. This model suggests that depression is the result of a stress reaction that has gone on too long.3,4,9,10

Evidence for a genetic predisposition to bipolar disorder is significant. The concordance rate for monozygotic twin pairs approaches 80%, and segregation analyses are consistent with autosomal dominant transmission. Multiple genes are likely to be involved, with strongest evidence for loci on chromosomal arms 18p, 18q, 4p, 4q, 5q, 8p, and 21q.3

Psychosocial theory focuses on loss as the cause of depression in vulnerable persons. Mania receives much less attention because it is thought to be more of a biologically caused disorder.3,4,8,10

The DSM-IV lists four types of bipolar disorder: bipolar I, bipolar II, cyclothymic, and bipolar disorder NOS (Figure 29-1).11 Figure 29-2, A shows the normal variation in moods. Bipolar I disorder consists of recurrences of mania and major depression or mixed states that occur at different times in the patient, or a mixture of symptoms that occur at the same time (see Figure 29-2, B). The essential feature of a manic episode is a distinct period during which the affected person’s mood is elevated and expansive or irritable (Table 29-2). Associated symptoms of the manic syndrome include inflated self-esteem, grandiosity, a decreased need for sleep, excessive speech, flight of ideas, distractibility, psychomotor agitation, and excessive involvement in pleasurable activities. During a manic episode, the mood often is described as euphoric, cheerful, or “high.” The expansive quality of the mood is characterized by unceasing and unselective enthusiasm for interacting with people. However, the predominant mood disturbance may be irritability and anger. Speech often is loud, rapid, and difficult to interpret, and behavior may be intrusive and demanding. Style of dress often is colorful and strange, and long periods without sleep are common. Poor judgment may lead to financial and legal problems. Drug and alcohol abuse also are commmon in this patient population.3,4,11,13

FIGURE 29-1 Mood disorders listed in the Diagnostic and Statistical Manual of Mental Disorders, fourth edition (DSM-IV-TR). Patients with bipolar disorder have had at least one episode of mania or hypomania. Cyclothymic disorder consists of recurrent brief episodes of hypomania and mild depression. Major depression usually is recurrent but sometimes happens as a single lifetime episode. Dysthymic disorder is mild depression that lasts at least 2 years. 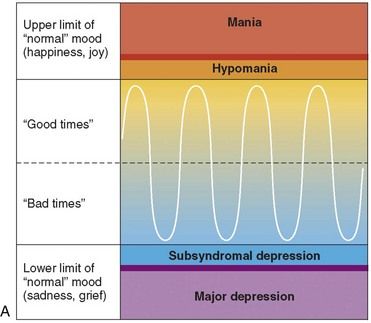 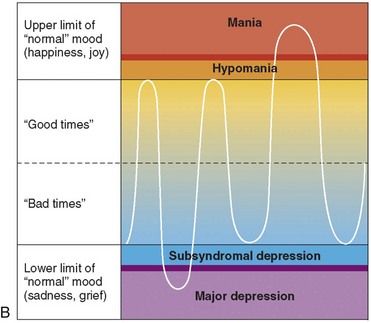 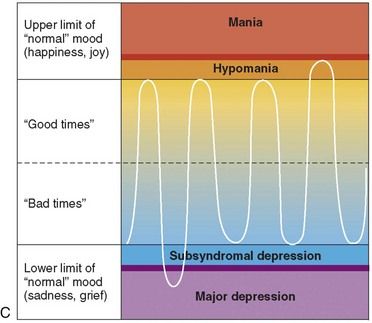 Men tend to have a greater number of manic episodes and women, more numerous depressive episodes. Untreated patients with bipolar disorder will experience a mean of nine affective episodes during their lifetime. The length of each cycle tends to decrease, although the number of cycles increases with age (Figure 29-3). Each affective episode lasts about 8 to 9 months. Bipolar patients have a greater number of episodes, hospitalizations, divorces, and suicides compared with unipolar patients.15

Table 29-3 shows commonly used antidepressants. The first-line medication for major depression is a selective serotonin reuptake inhibitor (SSRI) such as citalopram. Sertraline, venlafaxine, and bupropion are second-line drugs that may be used in patients who fail to achieve remission with citalopram.3,4,9–11 These agents are used primarily to treat major depression, dysthymic disorder, and depression NOS and have a limited role in depression associated with bipolar disorder that responds to an antipsychotic medication and the standard antidepressant medication fluoxetine. Drug therapy is essential in bipolar disorder for achieving two goals: (1) rapid control of symptoms in acute episodes of mania and depression and (2) prevention of future episodes or reduction in their severity and frequency. Mood disorders have a tendency to recur. Affective episodes may occur spontaneously or may be triggered by adverse events. Persons with mood disorders and their families must become aware of the early signs and symptoms of affective episodes, so that treatment can be initiated. These patients also must be made aware of the need for medication compliance and of the medication’s adverse effects and possible complications.3,4,8,10

The mainstays of drug therapy for bipolar disorders are the mood-stabilizing drugs, which generally act on both mania and depression (Table 29-4). Drugs used are lithium, valproic acid or divalproex (valproate semisodium), lamotrigine, and carbamazepine.16 The most widely used mood stabilizer is lithium carbonate. Lithium is most helpful in patients with euphoric mania. When lithium is ineffective, or when medical problems prevent its use, one of the anticonvulsants (valproic acid or divalproex, lamotrigine, or carbamazepine), with mood stabilizing effects, can be used.8 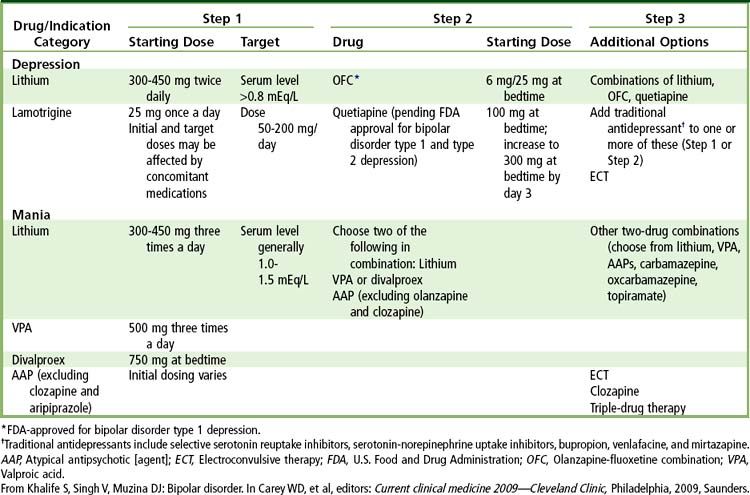 Mixed depressive and manic episodes are difficult to manage. First the manic behavior needs to be stabilized, and then the depression is addressed. An atypical antipsychotic (olanzapine) or a mood stabilizer is administered to stabilize the manic behavior, and depression is addressed with a standard antidepressant drug (fluoxetine). Another approach is to use a mood stabilizer and a combination agent consisting of an antidepressant plus an atypical antipsychotic—the olanzapine-fluoxetine combination (OFC) drug available as Symbyax.8

Electroconvulsive therapy is an effective antimanic treatment.17 It may be used in cases of manic violence, delirium, or exhaustion. It also is appropriate for use with patients who do not respond to medication taken for many weeks. When antidepressant drugs are given for bipolar depression, they may cause a switch to mania or a mixed state, or they may induce rapid cycling. The most common treatment for bipolar depression is an antidepressant combined with a mood stabilizer to prevent a manic switch or rapid cycling.3,4,8

It takes about 7 to 10 days for lithium to reach full therapeutic effectiveness. With most antidepressant drugs, a delay (10 to 21 days) is noted before full therapeutic benefits are achieved.3,4

Patients who have had two or three episodes of bipolar disorder, including depressive episodes, usually are treated indefinitely because of the near certainty of relapse. Lithium is the treatment of choice. About one third of patients will not experience additional episodes and are considered cured; a third of those who take lithium will experience less frequent or less severe episodes and will function well; and the remaining third of patients will continue to have frequent and severe episodes with ongoing disability.3,4,8

An estimated 30,000 suicides occur each year in the United States. About 70% of these involve persons with major depression. The physician must consider suicidal lethality in the management of patients with depression. In general, the risk for suicide is increased in association with the following factors: alcoholism, drug abuse, social isolation, elderly male status, terminal illness, and undiagnosed or untreated mental disorders. Patients at greatest risk are those with a history of previous suicide attempts, drug or alcohol abuse, recent diagnosis of a serious condition, loss of a loved one, or recent retirement, and those who live alone or lack adequate social support. Persons with a suicide plan and the means to carry out that plan are at greatest risk for suicide. Once medical control is attained in the patient with a mood disorder, insight-oriented psychotherapy often is initiated as an adjunct for management of the patient’s condition.4,11,17,18

Persons with somatoform disorders have physical complaints for which no general medical cause is present. Associated unconscious psychological factors contribute to the onset, exacerbation, or maintenance of physical symptoms. The following conditions are regarded as somatoform disorders: somatization, conversion disorder, pain disorder, and hypochondriasis (Table 29-5). Patients with a somatization disorder experience multiple, unexplained somatic symptoms that may last for years.3,4,19