28 Cements Based on Phosphoric Acid

Cements Based on Phosphoric Acid

One group of widely used cements is based on the vigorous reaction which occurs between certain basic oxides and phosphoric acid to form phosphate salts of low solubility. The three products considered in this section are the zinc phosphate cements, silicophosphate cements and copper phosphate cements. The silicate filling materials described in Chapter 20 are closely related, having a liquid component which is essentially an aqueous solution of phosphoric acid and a powder which is a glass derived from amphoteric or basic oxides, but these are considered separately due to their different applications.

Composition: These materials are generally supplied as a powder and liquid which are mixed together by hand (Fig. 28.1). Encapsulated products are available but are rarely used due to the extra cost involved (Fig. 28.2). They do, however, give both a greater speed and consistency of mix which has the dual benefits of more reliable performance and an increased working time. This is of particular benefit when using these cements as luting agents.

The composition of powder and liquid in a typical cement are given in Table 28.1. The major reactive component of the powder is zinc oxide. Small quantities of other oxides such as magnesium oxide may also be present. The liquid is essentially an aqueous solution of phosphoric acid buffered by adding small quantities of zinc oxide or aluminium oxide. These compounds form phosphates which stabilize the pH of the acid and reduce its reactivity.

Setting reaction: On mixing the powder and liquid together a vigorous reaction occurs, resulting in the formation of a relatively insoluble zinc phosphate as follows:

Only the surface layers of the zinc oxide particles react, leaving unconsumed cores bound together by the phosphate matrix.

The reaction is rapid and exothermic although its rate is tempered somewhat by the presence of buffers in the acid and a special process of deactivation of the zinc oxide powder involving heating and sintering with other, less reactive, oxides.

Manipulative variables: The powder/liquid ratio depends on the application. For cavity lining a putty-like consistency having a powder/liquid ratio of about 3.5 : 1 is used. For luting, a more fluid mix, with lower powder/liquid ratio, is employed to ensure flow of the cement during seating of the restoration. It is not normal practice to measure the proportions of powder or liquid but rather to assess the suitability of the mix ‘by experience’. When proportioning, it is important to remember that lowering the powder/liquid ratio produces a weaker, more soluble and more irritant material.

The powder is best incorporated into the liquid in small increments until the desired consistency is reached. This method has the effect of delaying the set slightly and creating more working time, since the concentrations of zinc phosphate produced during the early stages of setting are not sufficient to cause a noticeable increase in viscosity. When all the powder has been incorporated mixing should be quickly discontinued, since continuing to mix after zinc phosphate has started to form can significantly weaken the cement. Mixing is easier if carried out on a cooled glass mixing slab. Care must be taken, however, not to cool the mixing slab below the dew point, since water may condense from the atmosphere into the mix of cement below this temperature. Excess water affects both the setting characteristics and the physical properties of the set material. Proportioning and mixing are greatly simplified by using pre-encapsulated materials. Some products are supplied pre-encapsulated in syringes which enable the mixed material to be syringed into place following mechanical mixing for 5 or 10 seconds.

Fig. 28.1 A zinc phosphate cement supplied as a white powder containing primarily zinc oxide and a colourless liquid which is an aqueous solution of phosphoric acid. Mixing typically is performed on a glass mixing slab of the type shown. 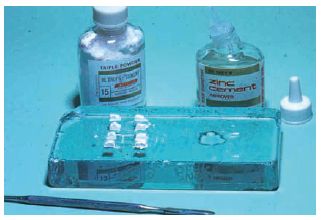 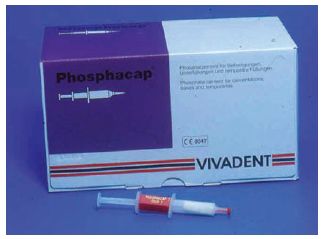 For hand-mixed powder/liquid systems it is necessary to take precautions over the handling of the liquid. The cap should be removed from the bottle only long enough to dispense sufficient liquid for one mix, and then replaced immediately. If the liquid is left open to the atmosphere for extended periods, water will either be lost or gained depending upon the ambient humidity. Such changes in the water content of the liquid may alter the setting characteristics and physical properties of the material. In a hot, dry atmosphere crystallization of phosphates may be observed on the sides of the bottle as water evaporates. If this occurs the remaining liquid is useless and should be discarded. Only a small change in the water content of the liquid is required to produce a large and unacceptable change in the properties of the cement.

When using the materials for luting, the working time is optimized by adding the cement to the fitting surface of the restoration, which is initially at room temperature, and not to the tooth preparations which are at mouth temperature (37°C). If the cement is added to the tooth preparations first, there is every chance that its viscosity will have increased consid/>