Now you have an understanding of the anatomy of the maxilla and mandible, the TMJs, and jaw musculature, we can examine how these structures work together to produce the complex actions involved in the biting and chewing of food. Technically, incision is biting a piece from a larger chunk of food and mastication is the grinding down of that piece into smaller components and mixing them with saliva. Mastication is often used to cover both actions. Box 26.1 briefly compares the anatomy of the human dentition to that of other mammals.

Box 26.1 The comparative anatomy of the human dentition

Many characteristics distinguish mammals from other vertebrates, including the possession of a single lower jaw bone articulated with the cranium by TMJs, a well-developed jaw musculature, and a heterodont dentition in which the teeth have different shapes to carry out different functions. The anterior teeth have sharp edges for cutting through food and the post-canine teeth bear multiple cusps for crushing food. Most placental mammals have evolved into specialized feeders with a masticatory apparatus designed to deal efficiently with a particular diet but lacking the ability to utilize all foodstuffs. The masticatory apparatus of primates has remained relatively unspecialized, both in its structure and function; the jaws retain a wide range of functions suitable for an omnivorous diet, which means we have few dietary limitations. We have the same dental formula as our nearest living relatives, the Old World monkeys and apes, but human teeth are much smaller in size relative to body mass and the jaw-closing muscles are also reduced in relative size. Despite these apparent structural disadvantages, the human masticatory apparatus can cope with a remarkable range of foodstuffs.

As well as knowledge of the TMJ, muscles of mastication, and other muscles used in jaw movements, it is necessary to appreciate some aspects of the static and dynamic relationships of the teeth to understand chewing movements.

The first thing to notice is the bigger width of the upper dental arch compared to the lower arch, a condition known as anisognathy. In Figure 26.1A, you can see that the maxillary molars overhang the mandibular teeth by half a cusp width so the buccal cusps of the lower molars and premolars occlude between the buccal and palatal cusps of the maxillary teeth. Observe also that the long axis of the maxillary molars and premolars incline buccally while the corresponding axis of the mandibular teeth incline lingually; the occlusal plane of the posterior teeth is thus curved transversely as illustrated in Figure 26.1A. It would be possible to chew food simply by moving the teeth up and down without any side-to-side movement, but this would be inefficient and not make full use of the cusps on the occlusal surfaces of posterior teeth. However, we can only chew on one side at a time because of the anisognathy of the upper and lower teeth.

As mentioned in Chapter 24, the mouth at rest is closed by tonic contraction of the muscles of mastication and facial expression. The teeth are not in contact; they are separated by a 2–4 mm gap called the intercuspal space (or freeway space) between the teeth. This is known as the mandibular or postural rest position; clinically, it is usually simply called the rest position. When the gap between the teeth is closed and they are in maximal contact, they are in intercuspal occlusion. The relationships and contacts between the maxillary and mandibular dentitions should not only form an efficient functional unit, but also produce a harmonious aesthetic appearance of the face. The most commonly used classification of occlusion is Angle’s classification where the key feature defining the occlusion is the relationship of the first permanent molars; these are the first permanent teeth to erupt and guide the other permanent teeth into position. 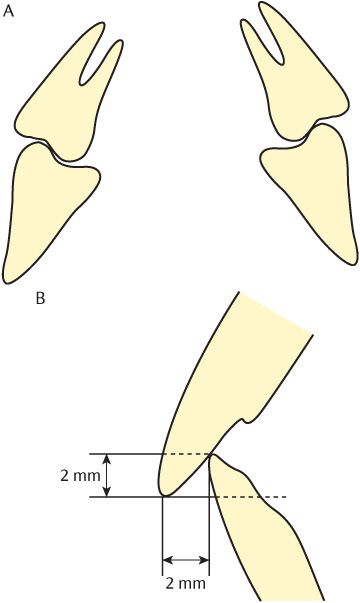 Fig. 26.1 A) Anisognathy and lateral curvature of the posterior teeth; B) Overbite and overjet of anterior teeth. 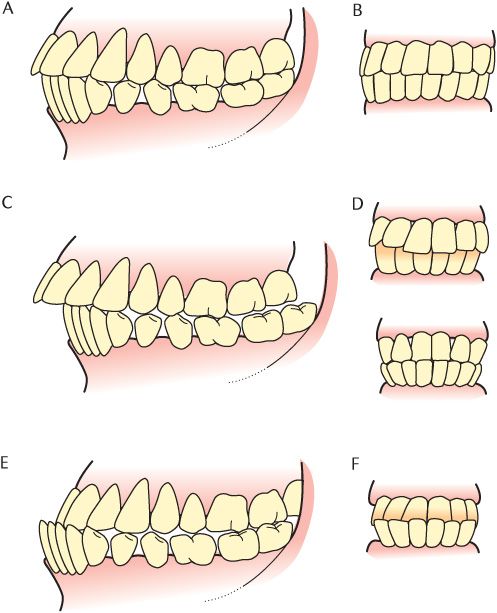 Angle’s Class I or normal occlusion is illustrated in Figure 26.2A. Find the first molars on the diagram and observe that the mesial cusps of the upper first permanent molar occlude in the groove between the mesial and distal cusps of the lower first permanent molar. It follows that there will be the same relationships between the second and third molars posteriorly; each mandibular tooth anterior to the first molars will be mesial to its maxillary equivalent; at the midline the mesial edges of the upper and lower central incisors coincide as shown in Figure 26.1B.

Figures 26.2C and 26.2D illustrate Angle’s Class II and Figures 26.2E and 26.2F show Angle’s Class III occlusion. Compare the position of the first molars in C and E with the position in the Class I occlusion shown in A. In a Class II occlusion, the buccal cusps of the first maxillary molar occlude between the distal surface of the lower second premolar and the mesial cusps of the first molar. The whole mandibular dentition is further back than in a Class 1 so it is also called distocclusion. The consequence on the anterior teeth can be seen in Figure 26.2C; the upper anterior teeth have a pronounced overjet. Figure 26.2D shows the two common variations in the incisor relationships in this occlusion. In a Class II division 1 occlusion, all the central and lateral incisors have a large overjet. In a Class II division 2, the lateral incisors are proclined with an increased overjet, but override the central incisors so pushing them back and reducing their overjet.

Human masticatory movements can be analysed stage by stage using techniques such as videophotography and cineradiography. It is clear from these studies that each individual possesses a characteristic chewing pattern which is established early in life. The chewing pattern varies within individuals with the consistency of food being consumed. Incision is the biting off of a portion of food from a larger piece by the anterior teeth although the use of cutlery or consistency of />