Since the end of the nineteenth century, numerous attempts have been made to develop power-driven instrumentation systems that would provide an appropriate and effective alternative to conventional manual root canal instrumentation.

A problem, however, in comparison to the purely manual use of stainless-steel instruments is the high risk of fracture, which necessitates torque-limited power (Hülsmann, 2002). 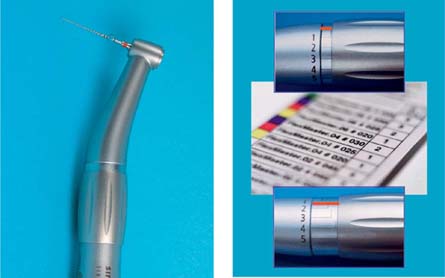 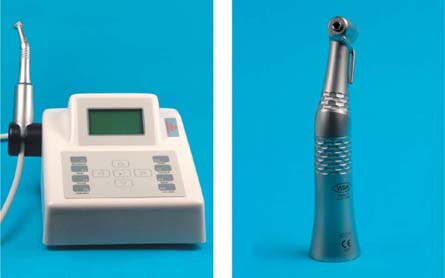 Torque-regulating motor (EndoStepper) with the appropriate handpiece (right). The torque is selected via a preprogrammed system.

To avoid the instrument becoming stuck and fracturing within the root canal, the instrumentation must be performed at a low constant speed (usually approximately 300 rpm) (Hülsmann, 2002).

In addition to the experience of and careful instrumentation by the clinician, as well as the speed, torque also influences the risk of instrument fracture (Yared, 2001). For this reason, numerous technical solutions incorporating limitations on torque have been tried to reduce the fracture rate. Today’s instruments comprise torque-limited handpieces powered by torque-regulated electric motors.

The torque limitation controls the rotation of the instrument within the root canal, as this is interrupted the instant that frictional resistance to the file exceeds the fracture limit of the instrument (Merte, 2003).

Torque-limited reducing handpieces work by means of multilevel control of maximum torque. This group of handpieces includes the Anthogyr NiTi control (Dentsply), which incorporates a friction clutch in the handpiece and four-step regulation. On the other hand, the SIRONiTi handpiece (Sirona) has a magnetic clutch with five levels of regulation. Different torque step levels inevitably lead to the problem of how to classify instrument groups.

To overcome the above problem, root canal files of varying mechanical capacity are grouped depending on the level of clinical safety. The weakest instrument wi/>