The locomotor system comprises the skeleton, composed principally of bone and cartilage, the joints between them, and the muscles which move bones at joints.

The skeleton is shown in outline in Figure 2.1A. The skull, vertebral column, and ribs together constitute the axial skeleton. This forms, as its name implies, the axis of the body. The skull houses and protects the brain and the eyes and ears; the anatomy of the skull is absolutely fundamental to the understanding of the structure of the head and is covered in detail in Section 4.

The cervical vertebrae are small and very mobile, allowing an extensive range of neck movements and hence changes in head position. The first two cervical vertebrae, the atlas and axis, have unusual shapes and specialized joints that allow nodding and shaking movements of the head on the neck. The thoracic vertebrae are relatively immobile. These carry the ribs which project forwards to join the sternum anteriorly; this combination of thoracic vertebral column, ribs, and sternum form the thoracic cage that protects the thoracic organs, the heart, and lungs and is intimately involved in ventilation (breathing). The lumbar vertebrae are large and robust as they carry the weight of the upper body. They are mobile to some degree, especially in sagittal plane, allowing you to bend your upper body back and forth on the hips. The fused sacral vertebrae form very strong joints with the pelvis, providing strong rigid attachments for the lower limbs. The coccygeal vertebrae are a pain should you fall on them. 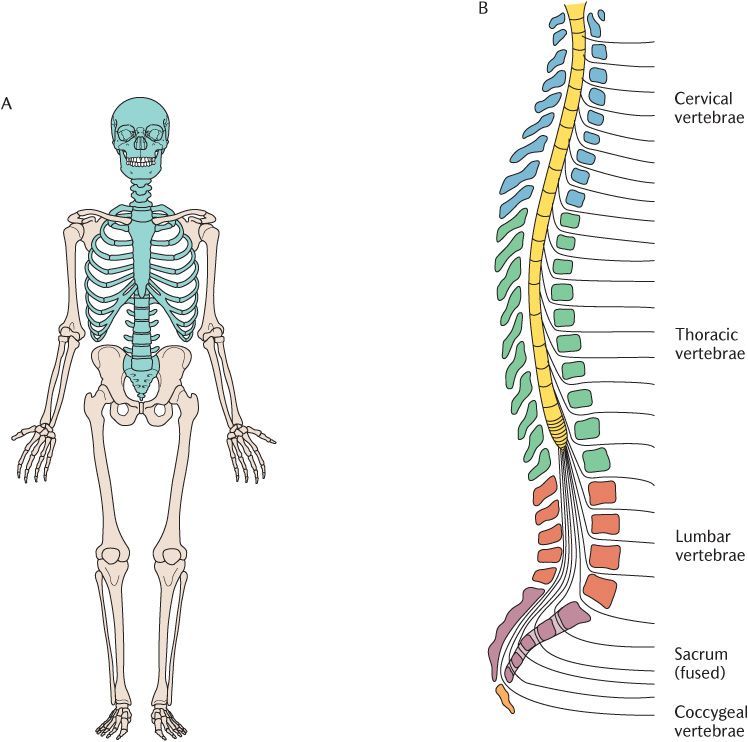 Fig. 2.1 A) The skeleton. The axial skeleton is shown in blue. B) The vertebral column viewed laterally.

When studying bone specimens prepared for anatomical examination, they are hard, dry, and very obviously dead. Many people think that this is what bone is like inside the body too. Nothing could be further from the truth. We have all experienced a bone fracture or know someone who has. The orthopaedic surgeon will bring the parts of the broken bone together and support them with a plaster cast. After a few weeks, the bone will have repaired itself and is able to function normally to support the person’s weight, for example, so the cast will be removed. This shows that bone is very much alive and very adaptable. A bone fracture is an extreme example of change in bone, but even intact bones are changing all the time to meet the functional demands placed upon them. This is a process known as remodelling and preserves the mechanical efficiency of bones.

Bone is potentially heavy, but is beautifully designed so that maximum strength can be achieved for minimum weight. Unnecessary bone is removed and additional bone is added as required. In a paralysed limb, the bone becomes thinner and weaker; in an athlete or an overweight person, it may become stronger and heavier. Look at the bones available to you for study and you will quickly find a damaged bone. The outside of the bone is thick and dense and is called compact bone. Look inside and you will see a meshwork of bone with spaces in between; this is cancellous or spongy bone made up of a meshwork of individual trabeculae as shown in Figure 2.2. 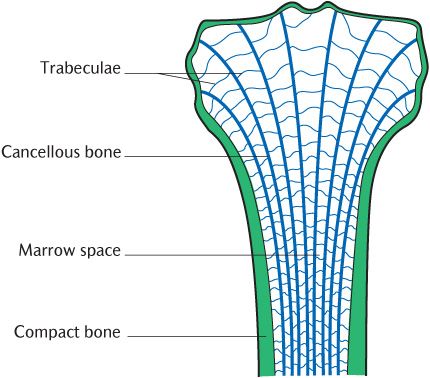 If you look very closely at a damaged bone, it may be possible to see that the trabeculae making up the cancellous bone are not arranged at random, but are aligned very accurately along the lines of stress that the bone is subject to. Look more carefully at Figure 2.2. The cancellous bone trabeculae in the shaft are arranged at right angles to each other along the lines of stress arising from the weight bearing function of the bones. In the areas of bone forming the joint, stresses will be applied in different directions according to the movement of your body; the trabeculae are arranged radially so that some are always aligned along lines of stress.

After a fracture, the broken ends are united by a temporary framework (or callus). However the callus is not weight bearing which is why a support cast is required while the bone is repaired and remodelled back to a mechanically efficient structure of compact bone externally and cancellous bone internally. Remodelling continues for some time after the patient begins to use the bone again. The reason that the callus of a healing bone is not weight bearing is because it is formed from woven bone, so called because it has a network of randomly orientated disorganized trabeculae. Woven bone is remodelled to form compact bone externally and cancellous bone internally. Woven bone is also the type of bone that is formed when bone formation is initiated during development and growth.

How is remodelling and repair brought about? Any biological tissue needs cells to form, maintain and repair it, and a blood supply to bring in the nutrients required for these processes. Bone is a member of a large group of tissues called connective tissues that all have the same basic components:

The proportions of ECM and fibres differ in individual connective tissues to give each one specific properties. The major fibre type found in the body is collagen, a triple helix of long chain molecules that give it a high tensile strength; it is ‘biological rope’. In bone, the ECM is reinforced by the addition of inorganic crystals of calcium hydroxyapatite, a property bone shares with three tissues that make up teeth—enamel, dentine, and cementum. The collagen fibres give bone its great tensile strength while the hydroxyapatite crystals provide its compressive strength. Bones are further strengthened by the muscles attached to them, contracting in such a way as to offset the applied force.

There are three types of cell associated with bone. Osteocytes are embedded in the rigidly mineralized matrix which makes bone incapable of growing by interstitial growth; the addition of material internally. Once bone has started to form, it can only grow by appositional growth of new material on its external and internal surfaces. Bone deposition is brought about by osteoblasts, some of which become entrapped as the new bone develops where they remain as osteocytes. It is usually necessary to remove bone from some surfaces as it is added to others to preserve the proportions of the bone and to stop it getting too heavy. Multinucleated giant cells called osteoclasts remove bone, a process known as resorption. Osteoblasts and osteoclasts are found in the periosteum and endosteum lining the external and internal surfaces of bones, respectively (see Box 2.1). When the load on bone changes, minute electrical currents are set up as the hydroxyapatite crystals are distorted; these currents stimulate cellular activity in osteocytes which in turn release signalling molecules that activate osteoblasts or osteoclasts.

Box 2.1 The clinical importance of periosteum

Periosteum is clinically important during operations on bone. It must be carefully reflected off the bone surface and then carefully replaced. Periosteum is the source of osteoblasts essential for repair of bone. It is also the main route for nutrition of bone; blood vessels passing over the bone give branches to the periosteum that then penetrate into the bone to supply it; if periosteum is not preserved, the bone will die by a process of aseptic necrosis, producing a weak spot in the skeleton.

Bone has the following functions.

• It forms a supporting framework for the body and forms the levers on which muscles act.

• It acts as a calcium and phosphorus store; 99% of the body’s calcium is stored in bone from where it is easily mobilized. Calcium is essential for muscle and nerve function and calcium levels in the blood must be maintained within very precise limits. If dietary calcium proves insufficient to maintain blood calcium levels, calcium is released from bone during remodelling by osteoclasts.

When bone marrow needs to be tested in adults, it is drawn from the sternum as this bone is the most accessible of those that are still actively haemopoietic. When a larger quantity of marrow is required for bone marrow transplants, it is removed from the hip bones; they have a larger reservoir of marrow than the sternum, but are equally accessible.

Marrow is the site of haemopoiesis—the formation of red and white blood cells. During prenatal life, most bone marrow is active red marrow, but during the growth period, the areas of haemopoiesis become progressively restricted. In the adult, red marrow is found only in the bones of the skull, the vertebrae, sternum, ribs, shoulder girdle, pelvis, and the proximal ends of some long bones. Elsewhere, the marrow becomes converted to inactive fatty yellow marrow (see Box 2.2).

2.2.3 Development and origin of bone

During fetal and post-natal life, bone development and growth occurs by two methods. Endochondral or cartilage-replacing bone is formed by osteoblasts on a cartilaginous model of the bone. In this type of bone formation, growth occurs in cartilage (see Section 2.3) and the structure is consolidated into bone. Intramembranous or dermal bone is formed directly by osteoblasts in fibrous connective tissue without a preceding cartilage model. All the bones below the skull (the post-cranial skeleton) are formed by endochondral ossification, except the clavicle. The vault of the skull and most of the facial skeleton are formed by intramembranous ossification, but the base of the skull and the bones surrounding the nose and internal ear are formed by endochondral ossification. Some skull bones form parts of the skull base and parts of the vault; they form by fusion of separate elements that develop by one of the two methods of bone formation (see Chapter 33). The clavicle has a similar mixed origin. Box 2.3 outlines the evolution of the two different bone types.

Box 2.3 The evolution of bone

The two types of bone formation have a long evolutionary history. A skeleton based on calcium rather than silicon appeared in the Cambrian geological period (between 545 and 510 million years ago), presumably because of a change in the chemistry of the ocean or the physiology of the creatures which lived in it. The first vertebrates had an exoskeleton consisting of bony plates within the skin. It is presumed that the same creatures had endoskeletons, possibly of cartilage, which were not preserved. In later vertebrates, cartilage-replacing bone developed in the endoskeleton and the exoskeleton was reduced considerably. The cartilage-replacing bones of modern vertebrates are believed to have been derived from the endoskeleton and their derma/>