2: Development of the Occlusion

Development of the Occlusion

Development of the occlusion, in other words, eruption of the teeth and formation of the interrelationship between the teeth of the upper and lower jaws, is a genetically and environmentally regulated process. Coordination between tooth eruption and facial growth is essential to achieve a functionally and esthetically acceptable occlusion. Most orthodontic problems arise through variations in the normal tooth eruption/occlusal developmental process. Therefore, every developing malocclusion and dentofacial deformity must be evaluated against normal development.

In this chapter, normal eruption timing and sequence of primary and permanent teeth is discussed. Since occlusion is regarded as a dynamic rather than a static structure, changes in the dental arch dimensions are then discussed. Finally, various common deviations in the occlusal development are addressed.

1 What are the stages of tooth development?

Tooth development is a genetically regulated process characterized by interactions between the oral epithelium and the underlying mesenchymal tissue.< ?xml:namespace prefix = "mbp" />1 During the first stage of tooth development, called the initiation stage, a plate-like thickening of the oral epithelium (dental placodes) can be seen in histological examination. This is followed by the bud stage with epithelial ingrowth and formation of bud-shaped tooth germs. Next, the mesenchymal tissue condenses around the epithelial buds and progressively forms the dental papilla. Gradually the dental epithelial tissue grows to surround the dental papilla.

From this stage the epithelium can be called the enamel organ. It gains a concave structure; therefore, this stage is called the cap stage. A third structure, the dental follicle, originates from the dental mesenchyme and surrounds the developing enamel organ. During this stage the shape of the crown becomes evident, but the final shaping of a tooth occurs during the next stage, called the bell stage. During the bell stage cytodifferentiation begins and tooth-specific cell populations are formed. Some of these cells differentiate into specific dental tissue-forming cells. During the secretory stage the differentiated cells start to deposit the specific dental matrix and minerals. Once the dental hard tissue in the crown has been formed and completely calcified, tooth development continues with the root formation and tooth eruption.

Root formation takes place concomitantly with the development of the supporting structures of the teeth (periodontal ligament, cement, alveolar bone). The epithelial buds of the permanent teeth (except permanent molars) develop from the dental lamina of the primary teeth.

2 What are the stages of tooth eruption?

Eruption of teeth can be divided into different stages.2 The first stage is called preemergent eruption when the developing tooth moves inside the alveolar bone but cannot yet be seen clinically. This movement begins once the root formation has started. Resorption of bone, and in the case of a permanent tooth, resorption of the roots of the primary teeth, is necessary to allow preemergent eruption. In addition, an eruption force (origin still unknown) must exist to move the tooth. Emergence, the moment when a cusp or an incisal edge of a tooth first penetrates the gingiva, usually occurs when 75% of the final root length is established. Next, postemergent eruption follows and a tooth erupts until it reaches the occlusal level (Fig. 2-1). Eruption speed is faster during this stage and therefore the stage term postemergent spurt is sometimes used. Eruption does not stop once the tooth has come to occlusion, but continues to equal the rate of the vertical growth of the face. On average a molar tooth erupts about 10 mm after having reached the occlusal contact. It is also important to know that eruption of a tooth causes the alveolar bone to grow. In other words, each tooth makes its own alveolar bone. This has a clinical bearing: if a tooth fails to erupt, no alveolar bone will develop; if a tooth is lost, alveolar bone is also gradually lost. 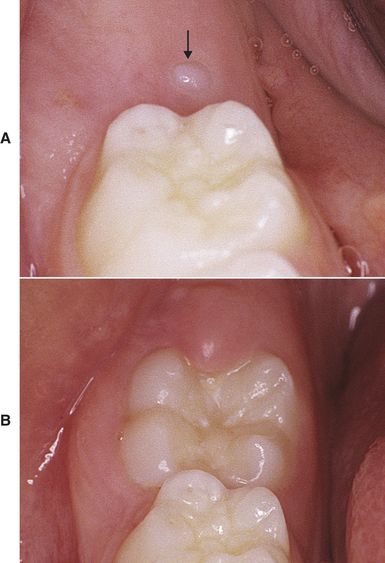 FIG 2-1 A, The mesiolingual cusp of the lower right first permanent molar (arrow) has emerged. B, Two months later the occlusal surface can be seen. Next, postemergent eruption follows and a tooth erupts until it reaches the occlusal level.

Recent studies have shown that short-term eruption of teeth follows day-night (circadian) rhythm.3 Eruption occurs mainly during early hours of sleep, although some intrusion can happen during the day, particularly after meals. Furthermore, it has been found that tooth eruption and secretion of growth and thyroid hormones have a similar circadian pattern.3

3 What is the eruption timing and sequence of primary teeth?

4 What are typical features of primary dentition?

Spacing in the primary dentition is a typical feature and a requirement to secure space for the larger permanent incisors (Fig. 2-2, A). About 70% of children have spaces in the front area of primary teeth. The largest spaces, called primate spaces, are located between the upper primary laterals and canines and between the lower primary canines and first molars. It is estimated that if the total amount of spaces per dental arch is 0 to 3 mm, there is 50% probability of crowding in the permanent dentition. If there are no spaces or even crowding in the primary dentition, crowding is inevitable in the permanent dentition (Fig. 2-2, B).4 During the full primary dentition stage (3-6 years), not much happens in the dimensions of the dental arches; however, overjet and overbite may decrease.5 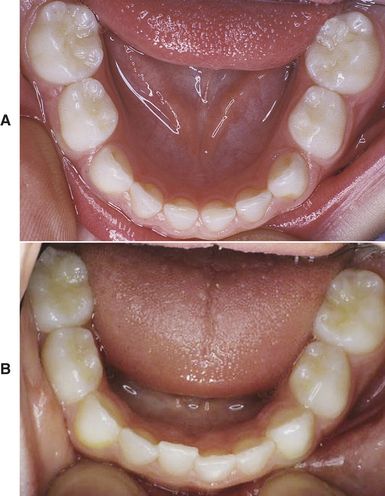 FIG 2-3 Terminal plane denotes the anteroposterior relationship between the distal surfaces of the upper and lower second primary molars. In the Caucasian population about 60% of children exhibit mesial step (A), about 30% flush terminal plane (B), and about 10% distal step (C).

6 What does the terminal plane relationship of the primary second molars predict on the permanent molar relationships?

7 How is Angle’s classification of occlusion defined?

Angle’s original classification of occlusion is based on the anteroposterior relationship between the upper and lower first permanent molars. In Class I occlusion, the mesiobuccal cusp of the upper first molar occludes with the buccal groove of the lower first molar. Class I occlusion can further be divided into normal occlusion and malocclusion. Both subtypes have the same molar relationship but the latter is also characterized by crowding, rotations, and other positional irregularities.

Class III malocclusion is opposite to Class II: the mesiobuccal cusp of the upper first molar occludes more posterior than the buccal groove of the lower first molar.

8 What is the eruption timing and sequence of permanent teeth?

The eruption sequence can be checked with the help of eruption charts and is a useful tool for the orthodontist to assess the dental age of a patient (Table 2-2). As a general rule, a tooth should erupt once two thirds of its root is formed.

Permanent teeth erupt in two different stages. The first transitional period occurs between the ages of 6 and 8 and is followed by approximately a 2-year intermediate period. The second transitional period starts on average at the age of 10 years and lasts around 2 years. In general, teeth erupt earlier in girls than in boys. As in the primary dentition, there is a great individual variation in the eruption timing of permanent teeth. Delay or acceleration of 12 months from the average eruption timetable is still within the normal range.

The first transitional period, between 6 and 8 years, can be divided further into three yearly stages. At 6 years the upper and lower first molars (also called 6-year molars) and the permanent lower central incisors erupt (Fig. 2-4). At 7 years the upper central and the lower lateral incisors emerge and erupt. The first transitional period is completed by the eruption of the upper lateral incisors at the age of 8 years. By this time all the permanent upper and lower incisors and first molars have erupted, for a total of 12 permanent teeth. The term mixed dentition is used to describe a dentition containing both primary and permanent teeth. 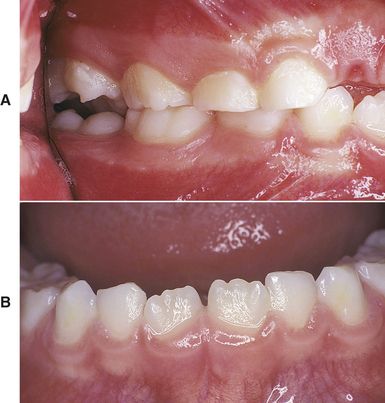 FIG 2-4 The first transitional period starts at approximately the age of 6 years with the eruption of the upper and lower first molars (A) and the lower central incisors (B).

The second transitional period can also be divided into three yearly stages. The first period is characterized by the eruption of the lower canines and lower and upper first premolars within the same time frame at about 10½ years of age. This is followed soon by the eruption of the upper and lower second premolars and usually somewhat later by the upper canines (at the age of 11 years). The second molars (12-year molars) complete the second transitional period at the age of 12 years.

9 When does the mineralization of the permanent teeth occur?

Radiologically visible mineralization of the permanent first molars starts approximately at the time of birth and is followed 6 months later by the upper and lower central and lower lateral incisors. The />