Stability only exists post-mortem. As long as we are alive, biological changes occur continuously. Changes in the dentition, the periodontal tissues and the occlusion will continue to occur whether or not an individual has had orthodontic treatment (Hopkins and Murphy 1971; Humerfelt and Slagsvold 1972; Sinclair and Little 1983; Harris and Behrents 1988). Growth and development in young individuals and the continuous age-related degeneration of the occlusion in adults result in clinically manifest occlusal adaptations. Stability of orthodontic treatment results, nevertheless, has been a frequently discussed topic (Little 1990; Kahl-Nieke 1996; Zachrisson 1997b; Shah et al. 2003; Littlewood et al. 2006). Based on many years’ experience, Zachrisson (1997a) stated that long-term stability of alignment is highly variable and largely unpredictable. According to Zachrisson, the key to successful stability is paying more attention to finishing. Post-treatment changes are frequently perceived as relapse but long-term observations of untreated individuals have demonstrated that untreated Class II and Class III malocclusions tend to increase in severity whereas Class I malocclusions seem to remain more stable (Harris and Behrents 1988). Nevertheless, orthodontists continue the search for the factors that may aid prediction of post-treatment changes. Only weak correlations have been found with treatment-related factors. When Little (1990) followed over 600 patients for more than 35 years, he found that neither pre-treatment variables nor treatment variables could be used to identify the patients who would show the largest post-treatment changes.

Post-treatment changes can be divided into two categories: the tendency of the teeth to move back towards their original position immediately after treatment; and the continuous development, related to growth in young patients and to the ageing process in adult individuals. Most studies focusing on stability of treatment results have not distinguished between the two types of changes.

Acceptance of the fact that post-treatment changes may occur has led orthodontists to focus on various retention regimens. In a Cochrane systematic review paper, Littlewood et al. (2006) made an attempt to evaluate the effectiveness of different retention strategies and concluded that there was insufficient research data on which clinicians could base their retention strategy. If absolute stability of the dentition is required, maintenance of the occlusion should be carried out independent of whether the patient has been orthodontically treated or not. With increasing age, the rate of change is influenced by both local and general factors (Riedel 1960, 1974; Hopkins and Murphy 1971; Humerfelt and Slagsvold 1972; Riedel and Brandt 1976; Little et al. 1981, 1988, 1990; Sinclair and Little 1983; Little and Riedel 1989; Melsen 1989; Little 1990; Riedel et al. 1992; Kahl-Nieke 1996). Yet, in spite of the lack of evidence and acceptance of post-treatment changes, orthodontists still desire stability, and showcase occlusions that apparently have been stable over many years with or without previous orthodontic treatment.

Whereas several factors are known to contribute to changes within the dentition, predictors for a stable occlusion have not yet been identified. Patients with identical occlusions at a certain point in time may, years later, exhibit large differences in their occlusions. Untreated individuals experience changes in occlusion as part of natural development whereas treated individuals experience changes that are a combination of relapse of tooth movements and ongoing development. Therefore, prior to commencing orthodontic treatment, the patient has to be informed of the need for maintenance of the treatment result from both biological and mechanical points of view (Kalia and Melsen 2001).

The immediate changes occurring after orthodontic treatment, when the teeth tend to return to their original positions, can be categorised under the term ‘relapse’. The long-term changes reflecting the age-related degeneration of the dentition and occlusion should be called ‘development’ (Little et al. 1988; Little 1990). The maintenance of an orthodontic treatment result includes prevention of both short-term relapse and long-term developmental changes. Although age-related skeletal changes cannot be prevented, the rate of change can be influenced by general and local maintenance of the dentition. The local and general factors influencing the dentition have been discussed in detail in relation to the development of malocclusion (Chapter 2) and are still valid following rehabilitation of a deteriorated dentition (Graber 1966; Little et al. 1988).

The maintenance of the treatment result comprise two aspects, neither of which can be neglected: biological maintenance and the mechanical maintenance (Reitan 1951, 1954, 1967, 1969; Melsen 1991; Kahl-Nieke 1996). Mechanical retention usually denotes orthodontic retention; biological maintenance of the dental and periodontal health, nevertheless, is of equal if not more importance. Both types of maintenance should be discussed with the patient before initiating dental rehabilitation, whether or not it includes minor or major orthodontic treatment (Melsen et al. 1989; Melsen 1991; Melsen and Agerbaek 1994). The patients should be aware that stability cannot be guaranteed but that much can be done to maintain the treatment result and that this maintenance requires the patient’s continued compliance. There seems to be a widespread myth that dental rehabilitation is self-maintaining and remains stable. Orthodontists themselves have contributed to this attitude by the frequent use of the word ‘stability’ when presenting a special technique or appliance (Reitan 1969; Kahl-Nieke 1996; Russell 2004; Littlewood et al. 2006).

In relation to all but in particular adult patients, it should be made clear that general health and especially factors controlling the bone turnover and the immune system influence the periodontium and related oral structures. Changes in the occlusion may therefore be the first sign of change in general health. The same applies to unexpected changes in the response of the periodontium to the ongoing treatment. Increased bleeding on probing or loosening of the teeth may be signs of a compromised immune system and bite opening occurring without any local reason may be the first sign of reduced muscle force and as such the first sign of muscle dystrophy (Kiliaridis et al. 1989). Bite opening may also be caused by local factors such as shortening of the ramus height and then is a sign of an intra-capsular destructive process leading to shortening of the condylar process (Fig. 19.1) (Kiliaridis et al. 1989; Kjellberg 1998). 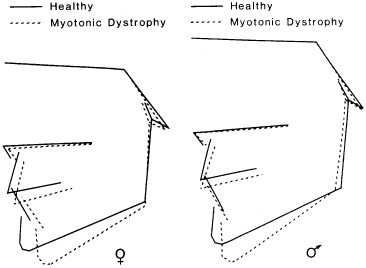 Doubtless, the majority of the post-treatment changes occur as a result of neglect of biological and mechanical maintenance. Biological maintenance is synonymous with maintenance of the teeth and a healthy periodontium. There is a large variation in the individual resistance to periodontal disease, but the same factors that lead to the destruction of the periodontium and thereby contribute to the development of a malocclusion may also trigger post-treatment changes. In most patients, a 3-monthly follow-up appointment with a hygienist would be sufficient to maintain a healthy oral environment, but each patient should also be given an individual oral hygiene cleansing protocol, including the use of, for example, Oral-B®, Superfloss® (Fig. 19.2) where bridges or bonded retainers prevent conventional flossing. Interdental brushes are very useful where the anatomy and restorations can compromise efficiency of normal brushing. Electric brushes should be supplemented with interdental brushes. It is important that the adult patients use a soft toothbrush as most patients will have exposed cementum, which may further worsen with abrasion of the exposed part due to brushing with a hard tooth brush (Fig. 19.2). The use of interdental brushes is necessary in most adult patients (Fig. 19.2) as it is important to avoid subsequent damage to the gingival tissues caused by a hard toothbrush and incorrect brushing technique.

Fig. 19.2 (1,2) Superfloss® can be used for interdental cleansing in spite of the presence of a bonded retainer. (3) Exposure of cementum caused by use of a hard toothbrush and wrong brushing technique. (4) Interdental brushes can be used when the interdental papilla does not fill the interdental space completely and normal brushing cannot remove all debris. 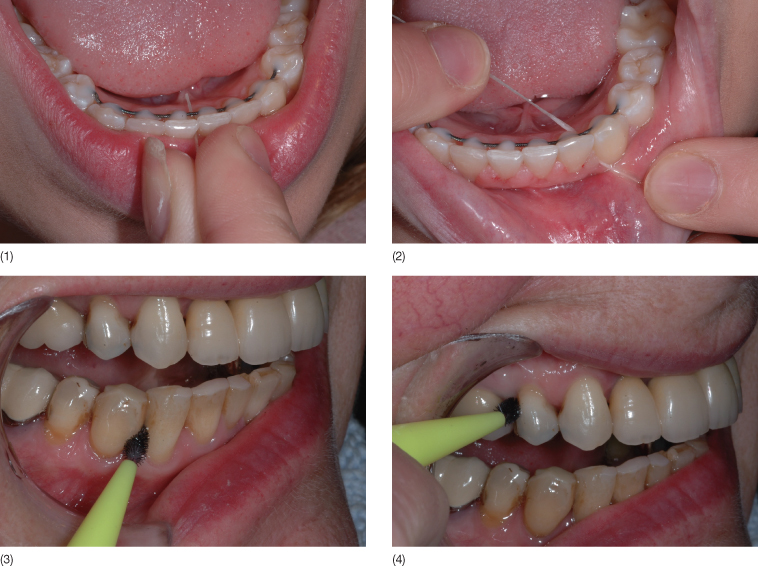 When discussing maintenance of a treatment result, most orthodontists only focus on mechanical retention. Mechanical retention is generally used following orthodontic treatment with the purpose of maintaining the positions of the teeth and the occlusion. This may give the patient a false sensation of stability. Following derotation of a rotated tooth, in addition to mechanical retention, circumferential supracrestal fibrotomy (CSF) has been recommended to prevent relapse (Edwards 1993). In a systematic review on retention, Littlewood et al. (2006) concluded that there was a significant increase in stability in the mandibular and maxillary anterior segments when CSF was used in conjunction with a Hawley’s retainer, compared with the use of a Hawley’s retainer alone (Littlewood et al. 2006). In cases of young adults with gingival hyperplasia, both fibrotomy and gingivectomy can be performed for aesthetics and stability, but in adult patients with marginal bone loss, the risk of prolonging the clinical crown countermands this procedure (Fig. 19.3).

Fixed bonded retainers are routinely used in adult patients in the lower arch and frequently in the upper anterior segment. The theoretical basis behind the recommendation of using bonded flexible wires is that these retainers allow micro-movements of the teeth and therefore help maintain the physical properties of the periodontium. Watted et al. (2001) used a perio-test and found that the mobility of stabilized teeth decreased but not outside the normal range.

The braided or twisted wire can be bonded to as many teeth as necessary. In the lower arch, the wire most frequently extends from canine to canine or the premolars on the two sides (Fig. 19.4). The latter approach is based on the premise that the contact point between premolar and canine may be a predilection area for relapse of a deep bite.

Fig. 19.4 (1) Premolar to premolar multistrand retainer wire: the position of the bond on the premolar varies according to the occlusion. (2) Model showing a stiff round 0.020 inch wire bonded on the canines only.

A comparison between four types of retainers (a thick plain wire bonded either only to the canines or to all teeth, a twisted wire bonded to all teeth from canine to canine or a removable retainer) did not demonstrate any difference in plaque accumulation or damage to the teeth (Artun et al. 1987). A larger study comparing fixed anterior retainers bonded to only the canines with those bonded to all the teeth favoured the latter (Stormann and Ehmer 2002). Another study also found that bonding of all six anterior teeth with a flexible wire is more effective in retaining the alignment of the incisors than a stiff canine-to-canine retainer.

An alternative to the metal wires is use of fibre-reinforced composites, which have also been recommended for temporary bridges (Sidhu and Ali 2001; Arteaga and Meiers 2004). When comparing different materials, Rose et al. (2002) found that longevity of the direct bonded multi-stranded wire was superior to the resin composite reta/>