19 Development of the central nervous system

19
Development of the central nervous system

The early development of the nervous system, the process of neurulation, has already been outlined in Chapter 8 and illustrated in Figure 8.4. To briefly recap, an area of dorsal ectoderm is induced by the underlying notochord to form the neural plate during the third week of development. The lateral edges of the neural plate rise to form the neural folds which eventually fold over and unite in the midline by the end of the fourth week to produce the neural tube. A distinct cell population on the crest of the neural folds, the neural crest, migrates from the forming neural tube to form various structures, including components of the peripheral nervous system (see p. 183). The closed neural tube consists of a large diameter anterior portion that will become the brain and a longer cylindrical posterior section, the future spinal cord.

19.2 Differentiation of the spinal cord

Initially, the neural plate is a single cell layer, but concentric layers of cells can be recognized by the time the neural tube has closed. An inner layer of ependymal cells surrounds the central spinal canal. Neuroblasts, the precursors of neurons, make up the bulk of the neural tube called the mantle layer; this will become the grey matter of the spinal cord. Neuroblasts do not extend processes until they have completed their differentiation. When the cells in a particular location are fully differentiated, the neuronal processes emerging from the neuroblasts form an outer marginal layer which ultimately becomes the white matter of the spinal cord.

Figure 19.1B shows that the neural tube changes shape due to proliferation of cells in the mantle layer. This figure also indicates two midline structures in the roof and floor of the tube, known as the roof plate and floor plate. They are important in the determination of the types of neurons that develop from the mantle layer. The floor plate is induced by the expression of a protein product of a gene called sonic hedgehog (SHH) produced by the underlying notochord; the floor plate then expresses the same gene itself. Neuroblasts nearest to the floor plate receive a high dose of SHH protein and respond by differentiating into motor neurons; as seen in Figure 19.1B, these cells group together to form bilateral ventrolateral basal plates. These plates are the future ventral horns seen in Figure 19.1C. Neuroblasts further away receive a lesser dose of SHH and become interneurons. As the neural tube closes, signalling molecules known as bone morphogenic proteins (BMPs) from the overlying ectoderm induce the formation of the roof plate. As illustrated in Figure 19.1B, the roof plate itself then secretes BMPs which induce the formation of dorsal horn thalamic projection neurons within the alar plates which will become the dorsal horns. Induction from the notochord and ectoderm determines the dorsoventral distribution of cell types within the developing CNS. The differential distribution of sensory and motor functions seen in the mature CNS is thus determined remarkably early in embryonic life.

Fig. 19.1 Development of the spinal cord.

As we have seen in Chapter 18, the lower cranial nerves originate from and terminate in their associated sensory and motor nuclei in the medulla. A similar arrangement of grey and white matter might be expected in the medulla because it is an upward continuation of the spinal cord. In the lower part of the medulla oblongata which is directly continuous with the spinal cord, the pattern of grey matter is indeed similar to that in the spinal cord; the basal plates forming motor nuclei tend to lie ventrally and the alar plates making up sensory nuclei are dorsal. Figure 19.2 demonstrates how this arrangement is altered when the central canal expands to form the fourth ventricle in the upper part of the medulla and the pons. The alar and basal plates are splayed out away from the midline plates which are pushed laterally, but the arrangement of the two plates relative to each other remains the same. Compare the position of the sulcus limitans separating the alar and basal plates in Figure 19.1 and 19.2. The alar plates now lie lateral to the basal plates. The result is that motor nuclei developing from the basal plates lie ventrally near the midline whereas sensory nuclei arising from the alar plates lie more laterally and dorsally; this explains Rule 2 for determining the position of cranial nerve nuclei given in Section 18.2.2). 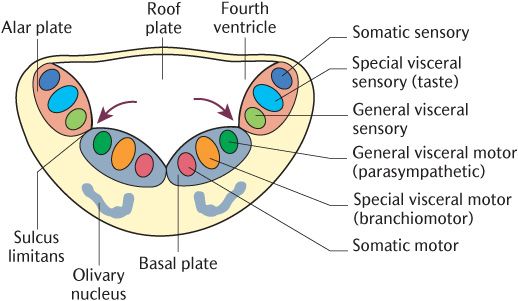 Fig. 19.2 Development of the brainstem and the location of cranial nerve nuclei. The arrows indicate the sulcus limitans.