A large part of the nervous system is dedicated to the control of the internal viscera and their functions. Much of the activity of these organs is controlled reflexly at the brainstem level, e.g. the cardiovascular and respiratory centres (the vital centres) in the reticular formation of the medulla controlling cardiac and respiratory activity. There are also centres in the cerebrum, notably the hypothalamus in the diencephalon. Somatic and visceral functions are closely integrated at these higher levels; think of the effect that emotional factors or somatic stimulation can have on heart rate, blood pressure, and gastrointestinal activity when we are nervous or are in pain. The nerves involved in these activities are described as visceral sensory or visceral motor nerves because they control visceral function; this distinguishes them from somatic sensory nerves from peripheral receptors and somatic motor nerves controlling voluntary function.

Visceral motor neurons innervate smooth muscle and secretory cells of the gastrointestinal and respiratory systems, the smooth and cardiac muscle of the cardiovascular system, the sweat glands and arrector pili muscles of the skin, and the muscles of the ciliary body and iris of the eyeball. In many cases, there is a dual supply from the sympathetic and parasympathetic divisions of the autonomic nervous system.

The functional effects of the two divisions of the autonomic system on a target tissue or organ are antagonistic; under normal circumstances, there is a balance between them, which maintains an appropriate level of visceral activity to maintain bodily homeostasis. In states of alarm or anger, there is a massive stimulation of the sympathetic outflow which completely overrides the parasympathetic effects and results in the body being placed in a state of activity suitable for violent physical activity, the so-called ‘fight or flight reaction’. This effect is backed up and prolonged by increased secretion of adrenalin from the adrenal medulla. Excess levels of adrenalin may cause fainting as outlined in Box 17.2.

The general distribution of the sympathetic nervous system is shown in Figure 17.2 which should be followed as the description is read.

Sympathetic preganglionic neurons are located in the intermediolateral horns of the spinal grey matter. The intermediolateral horns only extend from the first thoracic to third lumbar segments of the spinal cord. The preganglionic axons exit the CNS through the ventral roots of the first thoracic to third lumbar spinal nerves with somatic motor neurons, hence the term thoracolumbar outflow. As shown in Figure 12.11, sympathetic neurons leave the spinal nerves via white rami communicantes shortly after the dorsal and ventral roots fuse to form the spinal nerve. They form a chain of nerves (the sympathetic trunks) lateral to the vertebral column, interconnecting the sympathetic ganglia which contain the cell bodies of the post-ganglionic axons. 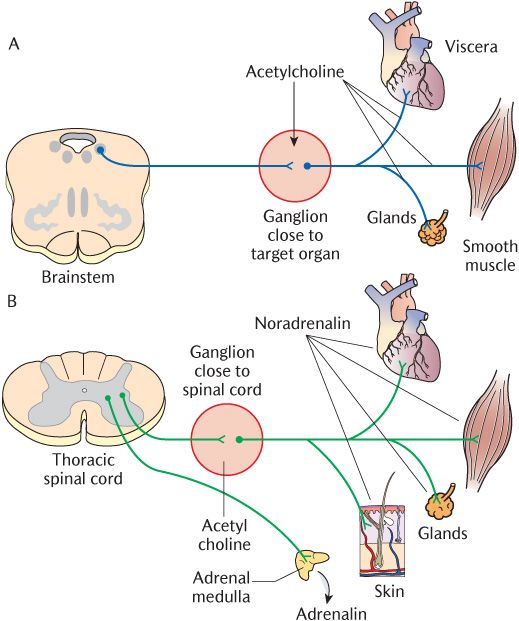 Fig. 17.1 The general arrangement of: A) The sympathetic; B) The parasympathetic nervous systems.

Box 17.1 Drug side effects and the autonomic nervous system

Knowledge of the structure and function of the autonomic nervous system is that it is the basis for understanding the side effects of many important drugs used in clinical practice that act on the sympathetic or parasympathetic systems or mimic their actions. Somewhere in the order of 500 generic and patent drugs in the British Pharmacopoeia have sympatheticomimetic actions. They either bind to adrenergic receptors, truly mimicking sympathetic stimulation or block cholinergic receptors, thus leaving sympathetic action unopposed. The main cause for concern from a dental practitioner’s poin/>