Odontogenic infections are usually mild and readily treated with the appropriate surgical procedure with or without supplemental antibiotic therapy. Infections that spread beyond teeth into the oral vestibule are usually managed by intraoral incision and drainage (I&D) procedures, as well as dental extraction, root canal therapy, or gingival curettage, as appropriate. The principles of management of routine odontogenic infections are discussed in Chapter 16. Some odontogenic infections are serious and require management by oral-maxillofacial surgeons, who have extensive training and experience in this area. Even after the advent of antibiotics and improved dental health, serious odontogenic infections still sometimes result in death. These deaths occur when the infection reaches areas distant from the alveolar process. The purpose of this chapter is to present an overview of deep fascial space infections of the head and neck originating in teeth, as well as several less common but important infections of the oral cavity.

The pathways of odontogenic infection extending from the teeth through bone and into surrounding soft tissues are discussed in Chapter 16. As a general rule, infection erodes through the thinnest adjacent bone and causes infection in the adjacent tissue. Whether this becomes a vestibular or a deeper fascial space abscess is determined primarily by the relationship of the attachment of the nearby muscles to the point at which the infection perforates the bony cortical plate. Most odontogenic infections penetrate the facial cortical plate of bone to become vestibular abscesses. On occasion, infections erode into other deep fascial spaces directly (Fig. 17-1). Fascial spaces are fascia-lined tissue compartments filled with loose, areolar connective tissue that can become inflamed when invaded by microorganisms. The resulting process of inflammation passes through stages that are seen clinically as edema (inoculation), cellulitis, and abscess. In healthy persons, the deep fascial spaces are only potential spaces that do not exist. The loose areolar tissue within these spaces serves to cushion the muscles, vessels, nerves, glands, and other structures that it surrounds and to allow relative movement between these structures. During an infection, this cushioning and lubricating tissue has the potential to become greatly edematous in response to the exudation of tissue fluid and then to become indurated when polymorphonuclear leukocytes, lymphocytes, and macrophages migrate from the vascular space into the infected interstitial spaces. Ultimately, liquefactive necrosis of white blood cells and this connective tissue leads to abscess formation, and spontaneous or surgical drainage typically leads to resolution. This is the pathophysiology of the stages of infection that clinicians see as edema, when bacteria inoculate the tissues of a particular anatomic space; cellulitis, when an intense inflammatory response causes all of the classic signs of inflammation and abscess, when small areas of liquefactive necrosis coalesce centrally to form pus within tissues.

On the basis of the relationship between the point at which the infection erodes through alveolar bone and surrounding muscle attachments, infections arising from any maxillary or mandibular tooth can cause vestibular, buccal, or subcutaneous space infections. Infections passing beyond the alveolar process on the deep (toward the oral cavity) side of the nearby muscle of facial expression invade the vestibular space, and those that enter soft tissue on the superficial (toward skin) side of those muscles enter the buccal or the subcutaneous space. Infections arising from maxillary teeth also tend to spread into the infraorbital, palatal, orbital, and infratemporal spaces, and the maxillary sinus (Box 17-1). Mandibular dental infections also tend to spread into the submandibular, sublingual, submental, and masticator spaces. Infections can extend beyond these primary spaces into the deeper fascial spaces of the neck, such as the lateral pharyngeal, retropharyngeal, carotid, and pretracheal spaces. From there, such infections can spread into the danger space and the mediastinum. In addition, infections can rise superiorly through the sinuses or vascular structures to invade the brain or the intracranial dural sinuses such as the cavernous sinus.

• Maxillary and other paranasal sinuses

• Space of the body of the mandible

Deep Fascial Spaces of the Neck

Low Severity—Little Threat to the Airway or Vital Structures

• Space of the body of the mandible

High Severity—Direct Threat to the Airway or Vital Structures

Borders of the Deep Fascial Spaces of the Head and Neck

Infections Arising from Any Tooth

As discussed in Chapter 16 and previously in this chapter, maxillary or mandibular teeth can cause infections of the buccal, vestibular, or subcutaneous spaces. The buccal space is actually a portion of the subcutaneous space, which extends from head to toe. Thus, a longstanding buccal space abscess tends to drain spontaneously through skin at its inferior extent near the inferior border of the mandible. Table 17-2 lists the likely causative teeth, contents, neighboring spaces into which infection may spread, and surgical approaches for drainage of the more commonly infected deep fascial spaces of the head and neck.

Relations of the Deep Fascial Spaces of the Head and Neck 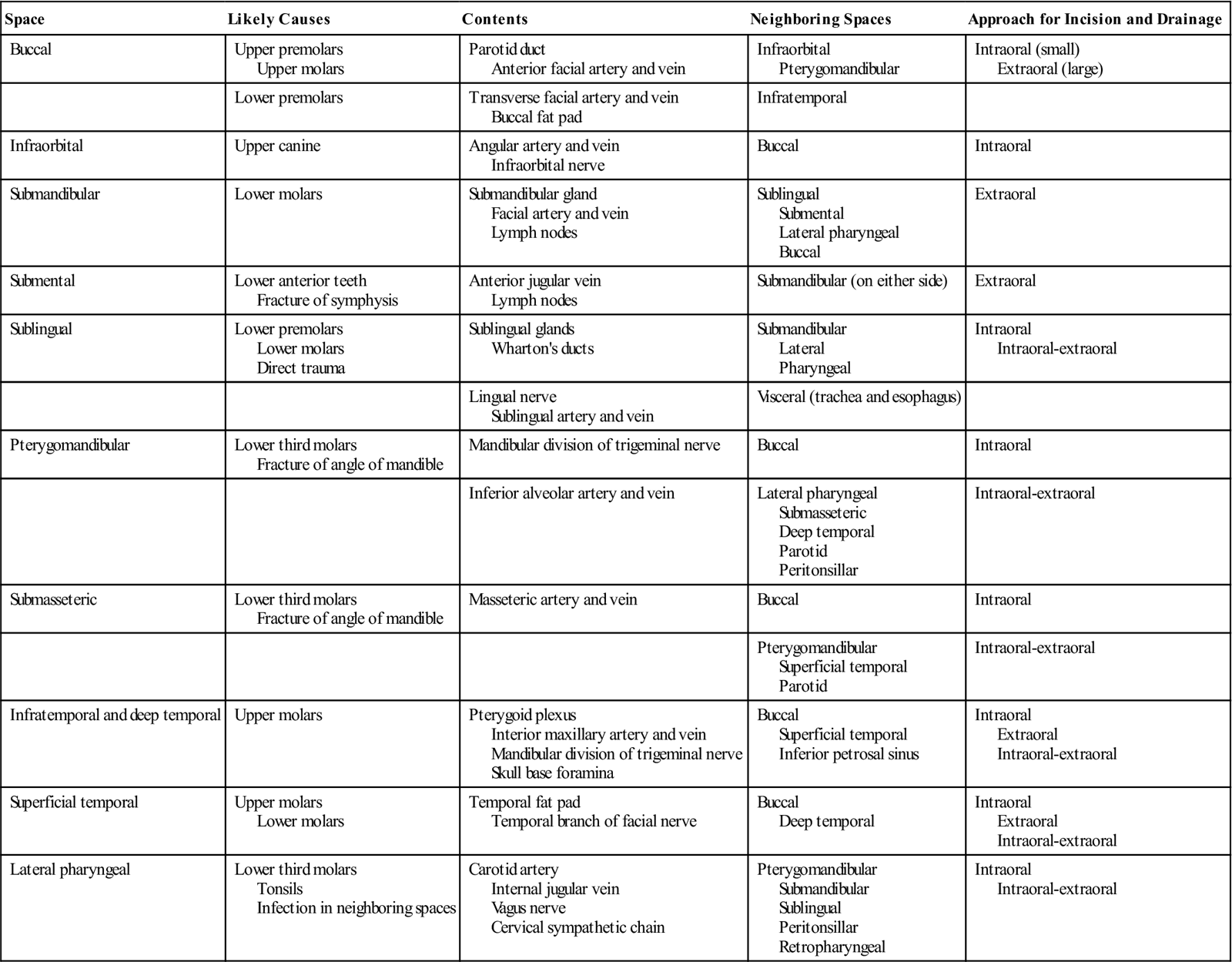 Because the apices of upper lateral incisors and the palatal roots of upper premolars and molars are closest to the palatal cortical plate, infection arising from these teeth can erode through bone without perforating the periosteum. The potential subperiosteal space in the palate is the palatal space.

The buccal space is bounded by the overlying skin of the face on the lateral aspect and the buccinator muscle on the medial aspect (Fig. 17-6). This space may become infected from extensions of infection from maxillary teeth through the bone superior to the attachment of the buccinator on the alveolar process of the maxilla. Posterior maxillary teeth, most commonly molars, cause most buccal space infections.