Over the last decade, rapid prototyping (RP) techniques have been employed widely in maxillofacial surgery. This has tended to concentrate on the reproduction of exact physical replicas of patients’ skeletal anatomy, which surgeons and prosthetists use to help plan reconstructive surgery and prosthetic rehabilitation.1–10

Developments in this area are moving towards exploiting advanced design and fabrication technologies to design and produce implants, patterns, or templates that enable the fabrication of custom-fitting prostheses without requiring a model of the anatomy to be made.11-15 However, there is also growing desire from clinicians to conduct more of the surgical planning using three- dimensional (3D) computer software. RP technologies provide a method of producing custom-fitting surgical guides to transfer the computer plan to the operating theater.

Previous work on the application of RP technologies in the manufacture of surgical guides has concentrated on the production of drilling guides for oral osseointegrated implants.16-18 This in turn led to commercially available dental implant planning software and stereolithography drilling guides (SimPlant, SurgiGuides; Materialise NV, Leuven, Belgium). There has also been limited research carried out in the use of surgical guides in facial prosthetic rehabilitation and orthopedic surgery.19-24 This chapter will describe one case study in detail, involving the design, production, and implementation of a surgical guide.

RP surgical guides have to be accurate, robust, rigid, and able to withstand sterilization. Due to these requirements, the majority of surgical guides have been produced using stereolithography, which necessitates local reinforcement of the guides using titanium or stainless steel tubes, as well as low – temperature sterilization methods such as the use of ethylene oxide.

The recent availability of systems capable of directly producing fully dense solid parts in functional metals and alloys has provided an opportunity to develop surgical guides that exploit the advantages of RP while addressing the physical deficiencies of previous RP guides. Surgical guides produced directly in hard- wearing, corrosion- resistant metals require no local reinforcement, can be conveniently autoclaved along with other surgical instruments, and are much less likely to be inadvertently damaged during surgery. The use of much stiffer metal materials also enables surgical guides to be made much smaller and thinner while retaining sufficient rigidity. This benefits surgery as smaller incisions can then be made, and the surgeon’ s visibility and access are significantly improved.

This section describes the approach taken to planning, designing, and producing the surgical guide reported in the following case study. A 3D computed tomography (CT) scan had already been acquired for diagnosis and planning of the patient’ s treatment, and these images were subsequently utilized for the planning of the surgery.

The patient was scanned using 3D CT (1 mm slices with 0.5 mm overlap) to produce 3D computer models of the anatomic structures required. The CT data were exported in DICOM file format, which was then imported into medical data transfer software (Mimics; Materialise NV). This software was used to generate the highest possible quality.stl data files of the patient’ s soft tissue and skeletal anatomy. The.stl files were then imported into the computer- aided design (CAD) software.

The quality of the bone was assessed using Mimics software (Materialise NV). Tools in the software enable measurements to be taken and the density (Hounsfield number) over a given section line to be shown (Figure 15.1). This enables the precise depth and density of the bone to be measured in the region of the intended implant sites. Other implant planning software packages have similar functions to assess bone quality at implant sites. 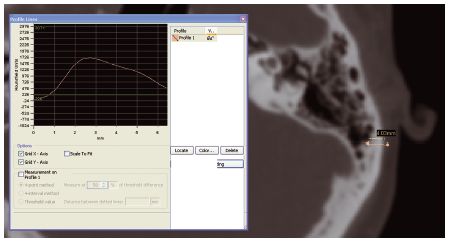 The CAD package used in this case study (FreeForm; SensAble Technologies, Inc, Woburn, MA, USA) was selected for its capability in designing the complex, arbitrary but well- defined shapes that are required when designing custom appliances and devices that must fit the human anatomy. The software has tools analogous to those used in physical sculpting and enables a manner of working that mimics that of the maxillofacial prosthetist working in the laboratory. The software utilizes a haptic interface (Phantom Desktop haptic interface; SensAble Technologies Inc) that incorporates positioning in 3D space and allows rotation and translation in all axes, transferring hand movements into the virtual environment. It also allows the operator to feel the object being worked on in the software. The combination of tools and force feedback sensations mimics working on a physical object and allows shapes to be designed and modified in an arbitrary manner. The design techniques utilized and their benefits have been previously recognized and reported.13,14,23,25

First, the data on the patient’ s anatomic structures were imported into the CAD software. To plan the placement of implants for the retention of a prosthetic ear, the patient’ s unaffected ear was copied and laterally inverted (mirrored). The clinicians then positioned this ear relative to the head to provide the best possible esthetic reconstruction. This enabled the ideal position of the implants to be identified, directly in line with the antihelix. Two cylinders of the appropriate size were positioned to represent the implants (Figure 15.2). The third cylinder is for the implant to retain the bone- anchored hearing aid.

The soft tissue data were then removed from view so that the location of the implants on the bone could be evaluated. The bone was assessed to ensure adequate quality and thickness, and if necessary the implant locations were adjusted. A surgical guide was then designed to fit onto the bone surface surrounding the immediate area of the implants. The guide was designed to be 1 mm thick and to cover areas of anatomic shape that would assist positive location on the bone surface. The position of the implant cylinders was transferred to the guide design by Boolean subtraction to leave holes indicating the necessary drilling locations. Digital design tools were also used to create embossed features on the surgical guide. The areas surrounding the holes were made deeper, and an orientation arrow was added to aid location during surgery. As a precaution, the patient’ s name was also engraved onto the part. The guide design is shown in Figure 15.3/>