13 Development of the heart, respiratory, and circulatory systems

13
Development of the heart, respiratory, and circulatory systems

The development of the circulatory and respiratory systems no longer occupies the time they once used to in dental curricula in the United Kingdom (UK). Apart from the intrinsic curiosity of knowing how two of the major body systems develop, the main reason that they were on the dental curricula was the same as any other aspect of developmental anatomy—the consequences of developmental abnormalities on the planning and execution of dental care. The diagnosis and treatment of developmental heart abnormalities has advanced so rapidly in recent years that people born with such conditions can now be treated so successfully that they can often live symptom-free for the rest of a normal lifespan. The adverse effects of heart defects on the functions of the circulatory and respiratory systems are less likely to be encountered and taken into account during dental treatment; people with problems that do impact on their general health are now most likely to be seen in specialist units. The same does not pertain in developing countries. This brief account is presented to provide an overview of the development of the two systems where knowledge of developmental defects and their consequences on the physiology of the circulatory and respiratory systems is required.

The circulatory system must develop to a functional state before any other system in the body. The embryo does not need to grow very much before it reaches such a size that diffusion of nutrients from the surrounding fluids is no longer adequate to fulfil its nutritional requirements. The cardiovascular system must, therefore, be established and begin to function very early on in development.

The vascular system begins to appear at the start of the third week of development. Angioblasts differentiate from the mesoderm in the cardiogenic area on the anterior margin of the embryonic disc and then from the extraembryonic mesoderm in the yolk sac wall. Angioblasts aggregate into isolated clusters or cords; the peripheral angioblasts flatten into endothelial cells, forming the blood vessel walls and the central cells float free to become red blood cells. The endothelial walls sprout to establish complex branching blood vessels that make numerous communications with each other. As already mentioned, the first vessels are in the yolk sac. They spread into the connecting stalk mesoderm and form a close association with maternal capillaries to form the placental and umbilical vessels (see Figure 8.2). Nutrients derived from the maternal circulation can thus be delivered to the developing embryo from a relatively early stage. Extraembryonic vessels become continuous with intraembryonic vessels around the fourth week of embryonic development.

In the third week post-fertilization, angioblasts form the primitive U-shaped heart in the lateral plate mesoderm anterior to the buccopharyngeal membrane. As shown in Figure 13.1A, the vascular system develops symmetrically so that even midline vessels are paired initially. Two heart tubes are formed originally; they quickly fuse to form a single tube by the end of the third week of development.

The next stage of heart development is brought about by the embryonic folding process already described in Section 8.4. As a result of the longitudinal folding, the heart tube rotates through 180 degrees and now lies inferior to the buccopharyngeal membrane (see Figure 8.7).

Figure 13.1 B and C show the single heart tube growing and bulging more and more into the pericardial cavity so that it begins to fold. In the very short period between 22 and 26 days, the folding heart enlarges considerably and differentiates into several distinct chambers and resembles the heart rather than a simple tube. The sequence of heart division can be followed in Figure 13.2. Transverse grooves mark the divisions of the heart tube. The heart is first divided into the bulbus cordis and ventricle (Figure 13.2A), then a second transverse groove divides the ventricle into the ventricle and atrium which receives a short venous trunk, the sinus venosus. 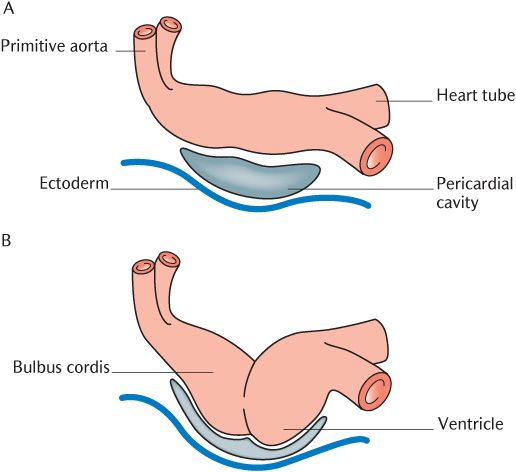 As the heart tube continues to grow, it becomes too long to fit into the pericardial cavity but the arterial and venous ends of the heart tube are fixed. Figure 13.2B shows the result; the tube folds in the region of the bulboventricular sulcus into a U-shaped loop. Figure 13.2C shows how a second fold at the junction between ventricle and atrium makes the heart S-shaped.

As shown in Figure 13.2D, several single chambers can be distinguished by the time folding is complete. Arrows in the Figure 13.2D indicate the blood flow from the sinus venosus into the atrium which bulges around either side of the bulbus cordis. Blood enters the ventricle, then the bulbus cordis and the paired dorsal aortae. The bulbus cordis will form the roots of the aorta and pulmonary trunk.

13.2.3 Development of the heart chambers

Between the fourth and eighth week, the heart is divided into its four distinct chambers. The changes occur simultaneously in all chambers, but it is easier to appreciate what happens by looking at the components of the heart tube in turn.

The sinus venosus is incorporated into the atria as they form and part of it forms the coronary sinus.

Division of the atrium into left and right chambers begins during the fifth week. Figure 13.3 indicates the sequence of changes taking place; Figure 13.3A shows the starting configuration. In Figure 13.3B, endocardial cushions grow from the anterior and posterior walls and unite to form the left and right atrioventricular openings. At the same time, a sickle-shaped ridge, the septum primum, grows forwards in the sagittal plane from the posterior wall of the atrium towards the atrioventricular opening, separating the right and left atria. As shown in Figure 13.3C, the two atria communicate through the gap under the sickle shape, but this is soon closed as the endocardial cushions grow. A number of small openings in the dorsal part of the septum primum, seen in Figure 13.3.C, unite to form the ostium secundum to maintain communication between the atria, shown in Figure 13.3D. Much later during the seventh week, as shown in Figure 13.3E, the septum secundum grows down from the roof of the right atrium to the right of the septum primum. The septum secundum is never completed so there is a deficiency in its free border that overlaps the ostium secundum. As illustrated in Figure 13.3F, the combined opening through the two septae is the foramen ovale, connecting the two atria.

The communication between the atria is important because oxygenated blood returning from the placenta enters the inferior vena cava. Oxygen-rich blood enters the right instead of the left side of the heart. The foramen ovale allows oxygenated blood from the right (pulmonary) to enter the left (systemic) side of the heart for distribution to the tissues and organs without having to pass through the pulmonary circulation. The foramen persists until just after birth when it closes by fusion of the septum primum and secundum; the fossa ovalis marks its position on the atrial septum (see Sect/>