The mandibular molars are larger than any other mandibular teeth. They are three in number on each side of the mandible: the first, second, and third mandibular molars. They resemble each other in functional form, although comparison of one with another shows variations in the number of cusps and some variation in size, occlusal design, and the relative lengths and positions of the roots.

The crown outlines exhibit similarities of outline from all aspects, and each mandibular molar has two roots, one mesial and one distal. Third molars and some second molars may show a fusion of these roots. All mandibular molars have crowns that are roughly quadrilateral, being somewhat longer mesiodistally than buccolingually. Maxillary molar crowns have their widest measurement buccolingually.

The crowns of the molars are shorter cervico-occlusally than those of the teeth anterior to them, but their dimensions are greater in every other respect. The root portions are not as long as those of some of the other mandibular teeth, but the combined measurements of the multiple roots, with their broad bifurcated root trunks, result in superior anchorage and greater efficiency.

The crowns of these molars are wider mesiodistally than buccolingually. The opposite is true of maxillary molars. 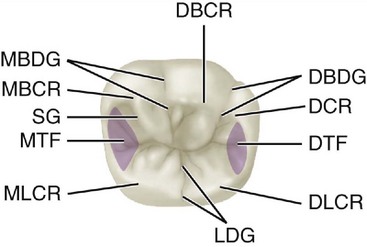 The mesial root is broad and curved distally, with mesial and distal fluting that provides the anchorage of two roots (see Figure 13-22). The distal root is rounder, broad at the cervical portion, and pointed in a distal direction. The formation of these roots and their positions in the mandible serve to brace the crown of the tooth efficiently against the lines of force that might be brought to bear against it.

DETAILED DESCRIPTION OF THE MANDIBULAR FIRST MOLAR FROM ALL ASPECTS

From the buccal aspect, the crown of the mandibular first molar is roughly trapezoidal, with cervical and occlusal outlines representing the uneven sides of the trapezoid. The occlusal side is the longer (see Figures 12-3, 12-4, 12-12, 12-13, and 12–14).

If this tooth is posed vertically, all five of its cusps are in view. The two buccal cusps and the buccal portion of the distal cusp are in the foreground, with the tips of the lingual cusps in the background. The lingual cusps may be seen because they are higher than the others. 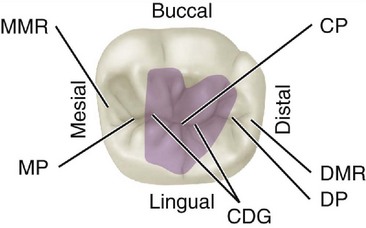 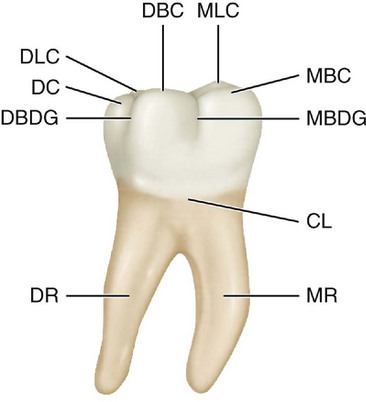 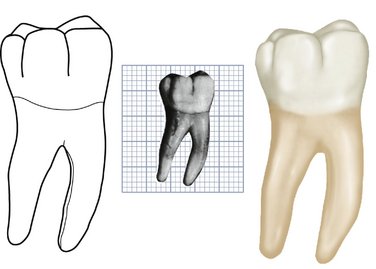 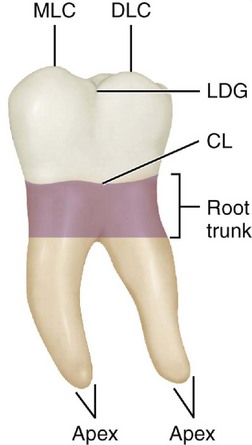 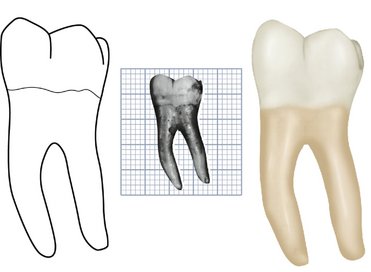 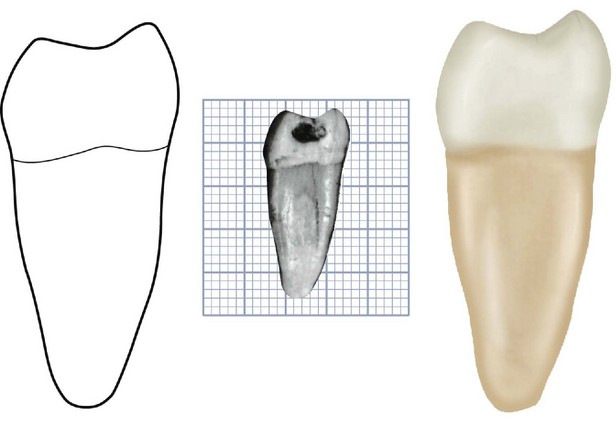 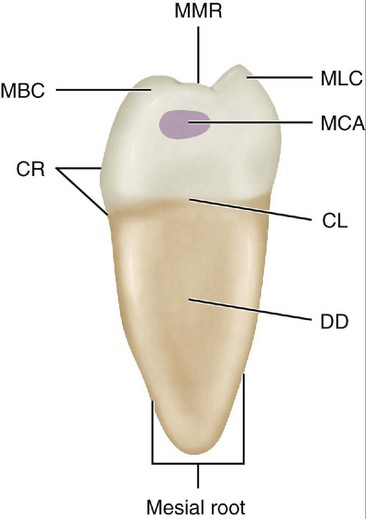 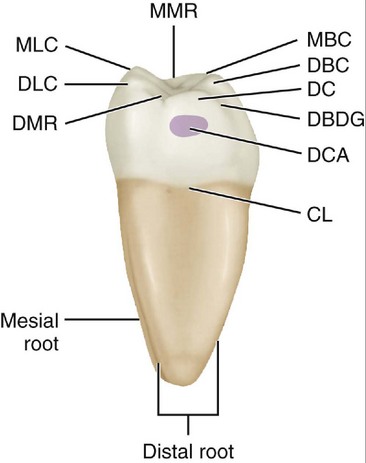 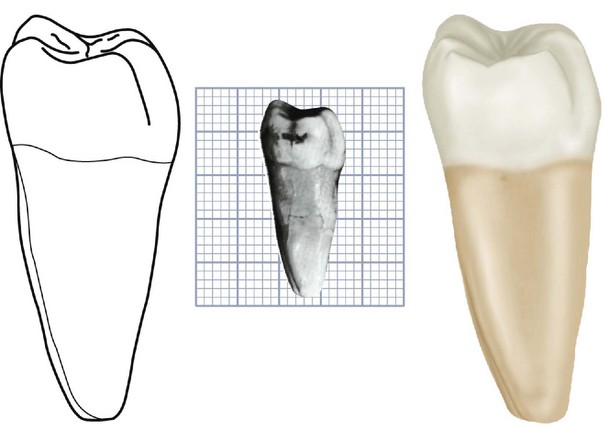 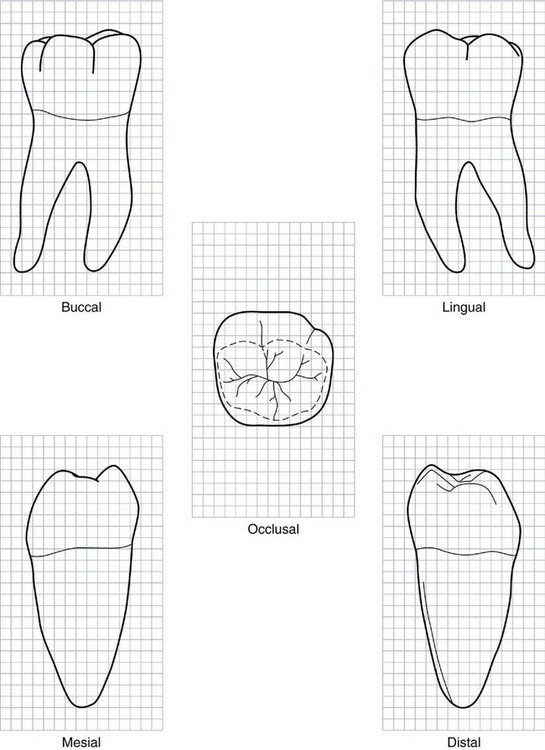 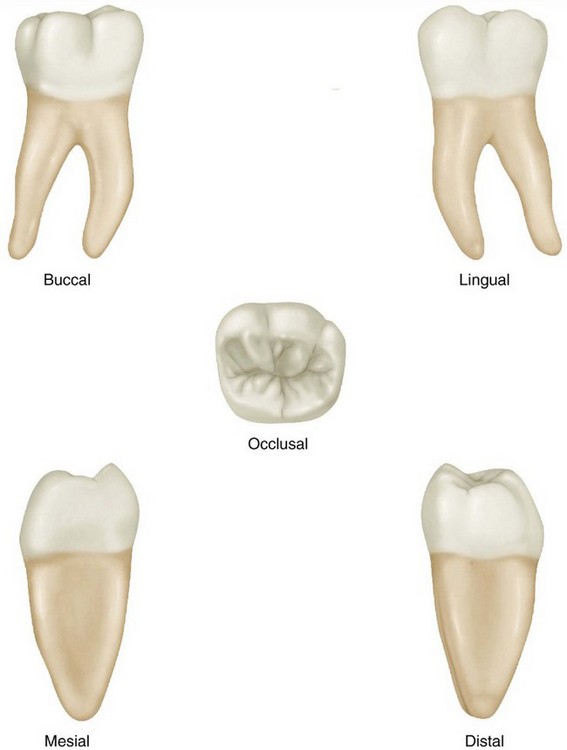 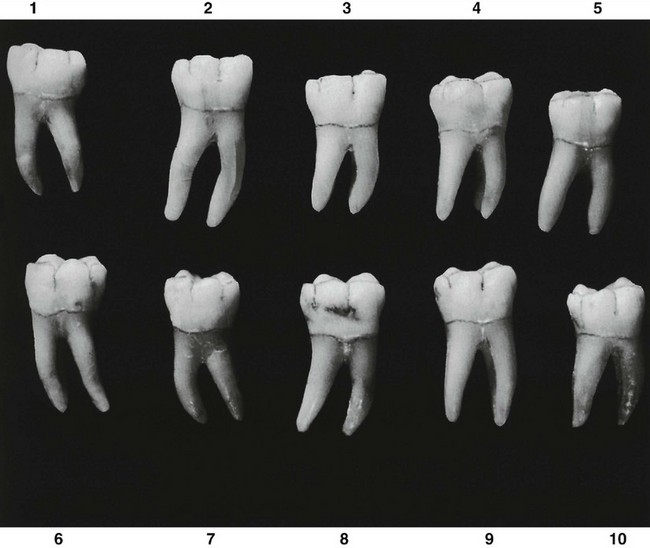 The cervical line of the mandibular first molar is commonly regular in outline, dipping apically toward the root bifurcation.

The surface of the buccal portion of the crown is smoothly convex at the cusp portions with developmental grooves between the cusps. Approximately at the level of the ends of the developmental grooves, in the middle third, a developmental depression is noticeable. It runs in a mesiodistal direction just above the cervical ridge of the buccal surface (see Figure 12-14, 6 and 8). This cervical ridge may show a smooth depression in it that progresses cervically, joining with the developmental concavity just below the cervical line, which is congruent with the root bifurcation buccally.

The roots of this tooth are, in most instances, well formed and constant in development.

The mesial root is curved mesially from a point shortly below the cervical line to the middle third portion. From this point, it curves distally to the tapered apex, which is located directly below the mesiobuccal cusp. The crest of curvature of the root mesially is mesial to the crown cervix. The distal outline of the mesial root is concave from the bifurcation of the root trunk to the apex.

The distal root is less curved than the mesial root, and its axis is in a distal direction from cervix to apex. The root may show some curvature at its apical third in either a mesial or a distal direction (see Figure 12-14, 1 and 8). The apex is usually more pointed than that of the mesial root and is located below or distal to the distal contact area of the crown. Considerable variation is evident in the comparative lengths of mesial and distal roots (see Figure 12-14).

Both roots are wider mesiodistally at the buccal areas than they are lingually. Developmental depressions are present on the mesial and distal sides of both roots, which lessens the mesiodistal measurement at those points. They are somewhat thicker at the lingual borders. This arrangement provides a secure anchorage for the mandibular first molar, preventing rotation. This I-beam principle increases the anchorage of each root (see Figure 13-22).

The point of bifurcation of the two roots is located approximately 3 mm below the cervical line. A deep developmental depression is evident buccally on the root trunk, which starts at the bifurcation and progresses cervically, becoming shallower until it terminates at or immediately above the cervical line. This depression is smooth with no developmental groove or fold.

The distal cusp is at a lower level than the mesiolingual cusp.

The distal outline of the crown is straight immediately above the cervical line to a point immediately below the distal contact area; this area is represented by a convex curvature that also outlines the distal surface of the distal cusp. The junction of the distolingual cusp ridge of the distolingual cusp with the distal marginal ridge is abrupt; it gives the impression of a groove at this site from the lingual aspect. Sometimes, a shallow developmental groove occurs at this point (see Figure 12-10). Part of the mesial and distal surfaces of the crown and root trunk may be seen from this aspect because the mesial and distal sides converge lingually.

The cervical line lingually is irregular and tends to point sharply toward the root bifurcation and immediately above it.

The roots of the mandibular first molar appear somewhat different from the lingual aspect. They measure about 1 mm longer lingually than buccally, but the length seems more extreme (see Figures 12-6 and 12-7). This impression is derived from the fact that the cusp ridges and cervical line are at a higher level (about 1 mm). This arrangement adds a millimeter to the distance from root bifurcation to cervical line. In addition, the mesiodistal measurement of the root trunk is less toward the lingual surface than toward the buccal surface. Consequently, this slenderness lingually, in addition to the added length, makes the roots appear longer than they are from the lingual aspect (see Figure 12-9).

When the mandibular first molar is viewed from the mesial aspect, with the specimen held with its mesial surface at right angles to the line of vision, two cusps and one root only are to be seen: the mesiobuccal and mesiolingual cusps and the mesial root (see Figures 12-7, 12-8, 12-12, 12-13, and 12–15). As already indicated, all of the posterior mandibular teeth have crown outlines from the mesial aspect that show a characteristic relation between crown and root. Th/>