“Lesson one” for any student of periodontology usually describes periodontitis as occurring when gingivitis spreads to the deeper periodontal tissues, causing irreversible loss of marginal alveolar bone and periodontal ligament and also apical migration of the junctional epithelium. Thus, periodontitis is considered to cause irreversible tissue loss, and it is not surprising that for many years one of the major challenges in periodontal research has been to devise and implement methods to regenerate the tissues that are lost due to the disease process.

A number of different techniques are now in use for promoting periodontal regeneration (also sometimes referred to as “new attachment therapies”). In this chapter, these techniques are outlined, their clinical indications are described, the outcomes that can be achieved by these methods and the factors that may influence outcomes are discussed, and a brief review of possible future developments is considered. It should be stated at the outset that success with periodontal regenerative therapies is dependent on the skill and the experience of the operator, and consequently these procedures are normally considered as within the realm of the trained periodontal specialist. The general dentist, however, should be aware of the methods used and their possible applications, but it is not the intention of the discussion here to give a comprehensive description of the detailed techniques used during regenerative procedures.

Periodontal regeneration can be defined as the regeneration of periodontal tissues to replace those lost due to disease, resulting in the formation of new bone, cementum, and functionally orientated periodontal ligament. Because these criteria can only be confirmed definitively by histological examination, in clinical use their outcome is assessed by increased gain in clinical attachment level and increased bone height, either by radiographic evaluation or sometimes, particularly in studies, by direct “bone sounding” using a probe under local anaesthesia. All of the techniques have (to a greater or lesser extent) been evaluated for histological evidence of actual regeneration, mainly in animal models of periodontal regeneration.

There are three main types of regenerative therapy:

• Biologically active materials that stimulate the periodontal tissues to regenerate

Guided tissue regeneration (GTR) is the use of barrier membranes to exclude the superficial gingival tissues from a healing periodontal surgical wound and thus promote wound repopulation by cells of the periodontal ligament which are able to regenerate the periodontium. The basic technique involves the placement of a thin membrane overlying the periodontal defect under the gingival flap during periodontal surgery. The membrane is secured in place, usually with an internal suture, and the flap is repositioned and sutured over the membrane (< ?xml:namespace prefix = "mbp" />Figures 12.1 and 12.2). Originally, membranes made of expanded PTFE fibres (GORE-TEX) were used. This material is very biocompatible, but the main disadvantage of its use is that a second surgical procedure is required 6 weeks after membrane placement in order to remove the material. Consequently, a range of resorbable membrane materials have been developed that are used in a similar way but do not require re-entry surgery at a later date. These include membranes of polylactate/polyglycolate polymers (similar to the material used for resorbable sutures) and membranes made from collagen obtained from animals, typically of bovine source. 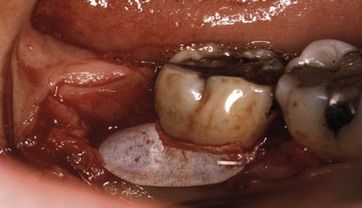 A wide range of graft materials have been described for placement in periodontal defects to promote periodontal regeneration. The types of graft are summarized in Table 12.1. The biological principle behind their use is that they act as a three-dimensional scaffold within the surgical defect to promote the in-growth of periodontal ligament and bone cells, ultimately resulting in resorption of the graft and replacement with healthy bone. In addition, theoretically, some of these materials have bioactive properties such as the presence of growth factors within the matrix that may further promote regeneration. However, the significance or superiority of this potential activity has not been convincingly demonstrated over and above the “osteoconductive” activity of the graft as a scaffold material. Histological studies of graft materials suggest that in some cases they are not completely resorbed but become merely encapsulated by fibrous tissue. Thus, there is debate about whether the radiographic appearance of bone regeneration seen with these methods is actually always equivalent to true periodontal regeneration. Nevertheless, the clinical improvements seen with grafting materials are similar to those of other regenerative techniques.