Oncocytes develop from the accumulation of large numbers of abnormal mitochondria within epithelial cells resulting in cytoplasmic enlargement with granularity and a low nuclear cytoplasmic ratio. Although this process can occur in many types of epithelial cells, oncocytic change within salivary glands is extremely common and seems to be an age-related phenomenon. Whether this change occurs because of an intracellular abnormality or in response to external stimuli has not been defined clearly. The term “oncocytosis” is used when oncocytic change is prominent. Oncocytosis can occur in either diffuse or nodular forms.

The 2005 World Health Organization Classification of Tumours: Pathology and Genetics of Head and Neck Tumours defines oncocytoma as a “benign tumour of salivary gland origin composed exclusively of large epithelial cells with characteristic bright eosinophilic granular cytoplasm (oncocytic cells).” Separation of nodular oncocytosis (nodular oncocytic metaplasia) from oncocytoma may be difficult; however, when an oncocytic proliferation is circumscribed, at least partially encapsulated, and large enough to be clinically detectable, it is classified best as an oncocytoma.

There are no clear etiologies for most oncocytomas. Occasional oncocytoma patients, however, have a history of prior radiation therapy or prolonged radiation exposure to the head and neck. These patients present at a younger age as compared with the nonradiation-exposed individuals.

Oncocytomas are well circumscribed, solid, tan-brown nodules without evidence of hemorrhage or necrosis. They are encapsulated at least partially and typically measure 3–4 cm, although lesions can range up to 7 cm. 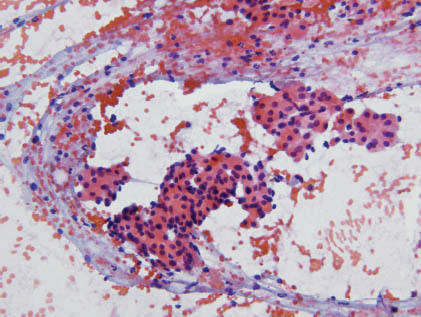 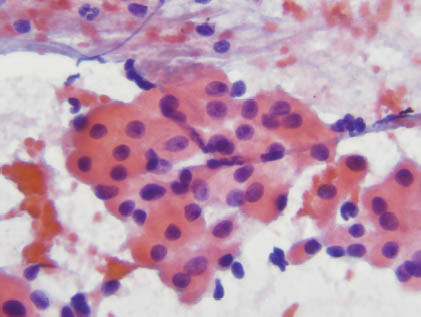 FIGURE 12.3. Oncocytoma. In this example, the oncocytes’ abundant granular cytoplasm is gray-blue, rather than pink-red, as shown in Figures 12.1 and 12.2 (Papanicolaou ×600). 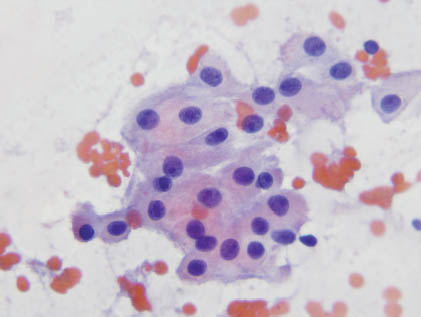