Earlier in the book (Chapter 2), mention was made of the importance of the muscular control of dentures. Success in achieving this, as in so many aspects of prosthetic dentistry, is dependent upon the efforts of three people:

1. The clinician – in recognising the importance of muscular control as well as designing and prescribing the shapes of dentures to be compatible with oral function.

2. The dental technician – in also appreciating the importance of muscular control, following the clinician’s prescription accurately and translating it into correctly designed dentures.

3. The patient – in literally getting to grips with the final product and, with the clinician’s support, persevering with the often-challenging task of learning the techniques for controlling the prostheses.

This chapter focuses on two aspects of denture design which are important in influencing how dentures function within the muscular environment into which they are placed:

The relevance of a patient’s natural incisal relationship

In dental publications it is common for photographs of dentitions or casts to depict a Class I incisal relationship and consequently there is a temptation to think, mistakenly, of this as the norm. A key objective of this chapter is to make the point that if such a relationship is provided for all complete dentures, treatment will fail in a sizeable proportion of patients. To prevent this from happening, there is a need to assess the patient carefully so as to establish a diagnosis of the skeletal relationship and the former incisal classification as both will influence the subsequent clinical and technical procedures.

A consideration of natural and artificial incisal relationships reveals a close similarity between orthodontic and prosthetic knowledge. At first thought, the two specialities might appear to be poles apart, as they are concerned largely with patients from opposite ends of the age range. However, a study of the factors which govern the development of the natural occlusion – particularly the influence of the surrounding muscles – reveals fundamental similarities. Furthermore, it becomes increasingly apparent that prosthetic dentistry can be practised successfully only if this orthodontic knowledge is applied to the clinical prosthetic situation. 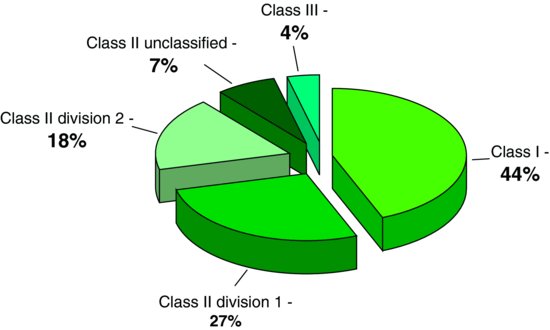 Development of the natural occlusion

As teeth erupt into the oral environment, their position is influenced by the activity and posture of the surrounding muscles, the size, shape and relationship of the jaws, and the occlusal forces produced by tooth contact. The shape and size of the jaws are inherited and, after growth has ceased, cannot be changed other than by surgical intervention. The functional behaviour of the muscles is partly inherited but may also be modified by treatment. It is important to consider the muscles and jaws as one unit because the muscles function from their skeletal origins and insertions.

The position of natural teeth is influenced more by the long-term forces associated with muscle posture than by the short-term forces occurring during function. As the teeth erupt into a mould of muscular tissue created by the lips, cheeks and tongue, they eventually take up positions of relative stability related to the relaxed posture of these muscles. This situation contrasts with that occurring with complete dentures, which are all too readily displaced both by the short-term functional forces and also perhaps by the long-term postural forces. The design of complete dentures, particularly that of the lower prosthesis, therefore has to take muscular displacement into account if stability is to be achieved.

It must be pointed out that these figures are representative of a group of young adolescents and that further growth of the mandible may reduce the number of those possessing a skeletal Class II pattern in a small percentage of cases; however, in the majority of patients the underlying Class II skeletal pattern is maintained into adulthood. The point being made is that parity will not be established between this group and the skeletal Class I group.

The results of the surveys suggest that, in the UK, the most common occlusion is a Class II tooth relationship superimposed upon a skeletal Class II jaw relationship. As a result, it would be expected that if all edentulous patients were provided with dentures which had a Class I incisal relationship, many such artificial dentitions would be in a different class from the previous natural ones. Some modification of the artificial arrangement is, of course, permissible and even requested by the patient – just as orthodontic treatment can be undertaken to modify a malocclusion where the prognosis is favourable. Of the remainder, the patient will either adapt to the dentures with difficulty or find them quite intolerable. However, as discussed fully in Chapter 2, the success of prosthetic treatment depends so much upon the adaptability of a patient that if additional demands are made by creating an incisal relationship completely divorced from the natural state the chances of prosthetic treatment succeeding are reduced. The reasons for possible failure will be discussed in the next section, after which ways of preventing failure will be described.

Reasons for failure of treatment

Figure 12.3 illustrates the tracing from a lateral skull radiograph of a dentate adult subject possessing a Class I incisal relationship. Of course, if complete dentures are constructed with the same incisal relationship, the artificial occlusion will be similar to the previous natural one, and few problems will be expected.

Figure 12.3 Tracing from a lateral skull radiograph of a dentate patient showing a Class I incisal relationship. 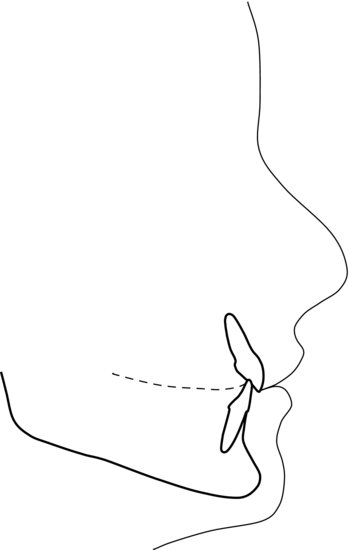 In order to convert a Class II division 1 incisal relationship (Fig. 12.4a) into a Class I relationship, it is necessary to modify the horizontal incisor overlap and, if there is an increased overbite, the vertical overlap as well. The horizontal overlap may be reduced by moving either the lower incisors labially or the upper incisors palatally. If there is a deep overbite the vertical overlap can be altered by reducing the crown length or increasing the occlusal vertical dimension of the dentures. This latter option would mean that the freeway space is substantially reduced or eliminated altogether and so is not feasible. Complications which are likely to arise when following the other possibilities become apparent when considering the example in the same figure.

In Fig. 12.4b, the upper artificial teeth are placed in the same position as the natural ones while the lower teeth are placed further forwards. The result of this modification is to position the lower labial segment anterior to the neutral zone. The force exerted by the lower lip is no longer balanced by that of the tongue and so the lower denture becomes unstable. This error is not an uncommon one and is illustrated by the clinical case shown in Fig. 12.5.

Figure 12.5 Top left: the incisal relationship of a patient complaining of a loose lower denture. Bottom left: the lower anterior teeth are positioned forwards of the neutral zone. Pressure from the lip results in mobility of the denture. Bottom right: replacement denture with the lower incisors placed in muscle balance. Top right: as a result of this change in incisal position, a Class II division 1 relationship is produced. 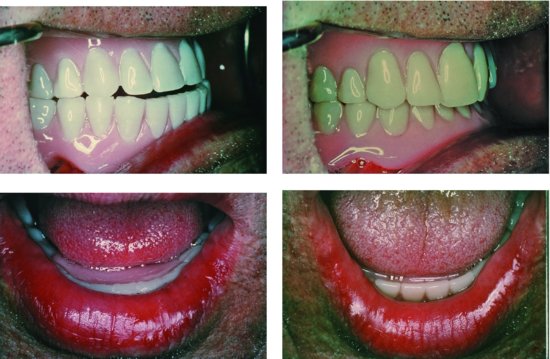 In Fig. 12.4c, the lower incisors are placed in the position of the natural teeth and the upper anterior segment is moved backwards. This treatment may be quite acceptable if the skeletal relationship is favourable, just as orthodontic treatment in the natural dentition may successfully reduce a large horizontal overlap. However, there is the possibility of a marked change in appearance – including reduced support for the upper lip – which might be for the worse, as shown in Fig. 12.6, where the anterior teeth and upper lip almost appear to be strangers. A treatment possibility that can be explored to overcome these problems is to retrocline the upper incisors rather than move them palatally. This produces a Class II division 2 relationship, which reduces the horizontal overlap while retaining a realistic relationship of the necks of the teeth to the underlying ridge.

Figure 12.6 (a) Unsatisfactory relationship of upper teeth to the upper lip produced by the top denture in (b). (b) The lower of the two dentures is a replacement with the anterior teeth placed further labially to improve their relationship with the lip. 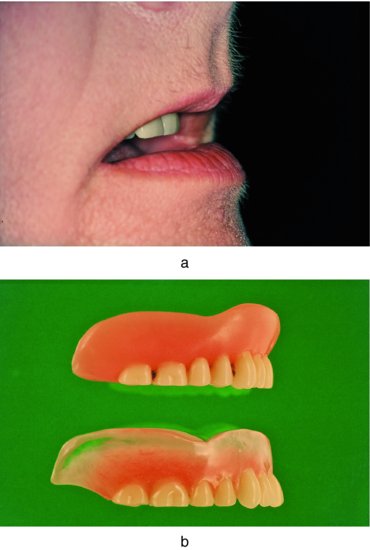 If the natural horizontal incisal overlap was large, allowing the lower lip to fall behind the upper incisors, a partial reduction of the overlap in the subsequent dentures may result in a very unsatisfactory ‘half-way house’ where the lower lip is unable to take up a comfortable position either behind or in front of the incisors. This results in the persistent irritation of the lip by the incisal edge.

There is a group of patients possessing a severe skeletal Class II relationship, which is the result of a prominent maxilla rather than an underdeveloped mandible, where treatment can be carried out to correct a horizontal overlap which may be in the region of 10–20 mm. Although a combination of prosthetic treatment and surgical removal of bone from the prominent premaxilla may imp/>

Tags: Prosthetic Treatment of the Edentulous Patient
Jan 19, 2015 | Posted by mrzezo in Prosthodontics | Comments Off on 12: Dentures and Muscles
Premium Wordpress Themes by UFO Themes
WordPress theme by UFO themes