Orthodontic treatment is most commonly carried out using a combination of fixed and/or removable appliances. From an orthodontist’s perspective these appliances are capable of producing complex and accurate tooth movements. However, from a patient’s perspective, they are usually unsightly and often uncomfortable to wear.

Several attempts have been made over the years at achieving orthodontic tooth movement with invisible appliances. Lingually placed fixed appliances do offer an aesthetic improvement; however, they provide significant compromise in terms of patient comfort and degree of difficulty for the orthodontic operator.

As long ago as 1945, Dr HD Kesling des­cribed the use of a flexible tooth-positioning appliance (Kesling, 1945). Within the last decade, several orthodontic companies have adapted vacuum-formed retainers (VFRs) to be used for the purpose of active orthodontic tooth movement (Tuncay, 2006). Different laboratory techniques are utilised in the construction of these vacuum-formed active appliances (VFAAs). This chapter will focus on the clinical indications and potential limitations of such appliances.

Learning Outcomes
At the end of this chapter you should be able to:

It has been suggested that VFAAs are capable of achieving the vast majority of complex orthodontic tooth movements (Vlaskalic and Boyd, 2002; Boyd, 2008). However, it is our opinion that there are significant limitations to the tooth movement that can be achieved with VFAAs. VFAAs are particularly appropriate for simple tipping tooth movements; in addition, they are extremely effective at de-rotating teeth, even in cases that may prove troublesome with a fixed appliance. It has also been shown that prolonged orthodontic treatment with VFAAs may reduce anterior open bites due to the long-term intrusive forces produced by occlusal coverage of the posterior teeth.

It is our opinion that VFAAs should not be used for complex orthodontic treatment, particularly involving dental extractions. VFAAs are not capable of producing bodily tooth movement. In addition it is extremely difficult to place intrusive or extrusive forces on individual teeth with VFAAs. Some authors have described the use of labial attachments placed on anchorage teeth to improve retention of the VFAA, allowing intrusive forces to be placed on adjacent teeth. However, the intrusion achieved is usually limited and often results in extrusion of the anchorage teeth.

Simple orthodontic problems can be treated with VFAAs within 6 months. However, prolonged use of VFAAs can lead to the development of mild posterior open bites due to the intrusive forces produced by full occlusal coverage of the appliances (Iscan and Sarisoy, 1997).

In view of the complete tooth coverage, oral hygiene and diet need to be excellent to prevent demineralisation, caries and periodontal problems.

The majority of patients treated with VFAAs are adults who seek treatment complaining of incisor crowding. This can be related to a general dento-alveolar disproportion and is often exaggerated by poor tooth morphology. Patients with crowded incisors often display relatively sharp contact points in addition to tapered crown form. The majority of adult cases treated with VFAAs require some inter-proximal reduction (IPR) during treatment. This provides space for alignment whilst flattening the contact points and is thought to enhance long-term stability. Systems that require mid-treatment impression taking do offer more flexibility when planning IPR. Often the required degree of IPR is difficult to specify at the start of treatment, and difficult to control precisely.

VFAA treatment is particularly suited to adult patients who are reluctant to consider fixed appliance treatment (Figure 11.1). In addition, there are advantages in adults who have heavily restored dentitions, with large numbers of crowns or veneers. Porcelain restorations have proved to be a challenge to orthodontic practitioners in terms of securing good attachment of fixed appliances. Obviously, this is not an issue when utilising VFAAs. 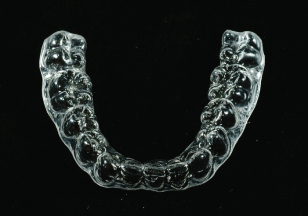 However, there are definite limitations of treatment with VFAAs and studies have shown that fixed appliances do produce consistently better results (Djeu et al., 2005). It has been suggested that there may be less root resorption with VFAAs, but this area requires further research.