10 Removable Appliances for the Postgraduate in Specialist Orthodontic Training

Removable Appliances for the Postgraduate in Specialist Orthodontic Training

This chapter will give an overview of the types of removable appliances that may be used as part of the definitive treatment for some of the more severe malocclusions. The treatment of these malocclusions and the use of the appliances discussed should not be undertaken without the appropriate theoretical knowledge and practical experience. Therefore, this treatment is really the preserve of the specialist ortho­dontist or those treating patients under the close supervision of a specialist orthodontist.

However, it is hoped that this chapter will serve as a useful source of basic information for those just starting on their postgraduate training, and also provide some direction for further reading and learning for those who are less experienced, but wish to develop their knowledge further.

The chapter will be divided into three sections covering:

Learning Outcomes
At the end of this chapter you will be able to:

Removable appliances for the correction of excessive positive overjet are commonly referred to as functional appliances in the UK. However, they are also known as orthopaedic or growth modification devices because of their perceived effect on maxillary and mandibular growth.

The term ‘functional’ appliance derives from the initial use of these appliances, which aimed to alter the function of the mandible and its musculature by forcing the patient to posture the mandible forward, so reducing the overjet. The stretching of the muscles caused by this was thought to encourage growth of the mandible.

A wealth of literature, both in textbooks and journal articles, has been published on the use of and theory behind functional appliances. Unfortunately, it is not possible to draw firm conclusions from many of the older research papers as the methods and statistical analyses are flawed. However, it is imperative that the clinician has a good background knowledge of functional appliances before embarking on any such treatments, as inappropriate/inaccurate provision, design and instructions on wear can have a very deleterious effect on the patient’s malocclusion, facial appearance, treatment time, expectations and co-operation.

A well-worn functional appliance will, relatively rapidly in a growing individual, change the molar relationship and reduce the overjet and overbite. All of these changes are usually desired, but functional appliances also pro­duce some changes that are not always advantageous, e.g. increase in the lower anterior face height and proclination of the lower incisors.

The effects of the use of functional appliances on the correction of a Class II division 1 malocclusion are both dental (70%) and, generally to a far lesser extent, skeletal (30%). A more recent multicentre randomized controlled trial has indicated that these figures vary with the parameter being measured (O’Brien et al., 2003). In this study, 73% of overjet reduction and 59% of molar correction was dental. How­ever, the authors reported significant individual variation in the response to functional appliance therapy and, clinically, variation in response is what is typically seen.

These are generally far less predictable than the dental effects, but include:

Figures 10.1 and 10.2 show the pre- and post-treatment intra- and extra-oral clinical photographs, respectively, of a patient who underwent 6 months of treatment with a functional appliance (Twin Block). It is apparent that the appliance has corrected the overjet and molar relationship, but has had a lesser effect on the skeletal pattern, although there has been a beneficial increase in lower anterior face height.

Figure 10.1 Pre-treatment (a–e) and post-treatment (f–j) intra-oral views of a patient who underwent 6 months of functional appliance (Twin Block) treatment. Note the correction of the incisor and molar relationship to Class I. Also note the lateral open bites in the post-treatment photographs caused by the posterior biteblocks on the Twin Block appliance. Fixed appliances will now be needed to complete treatment. 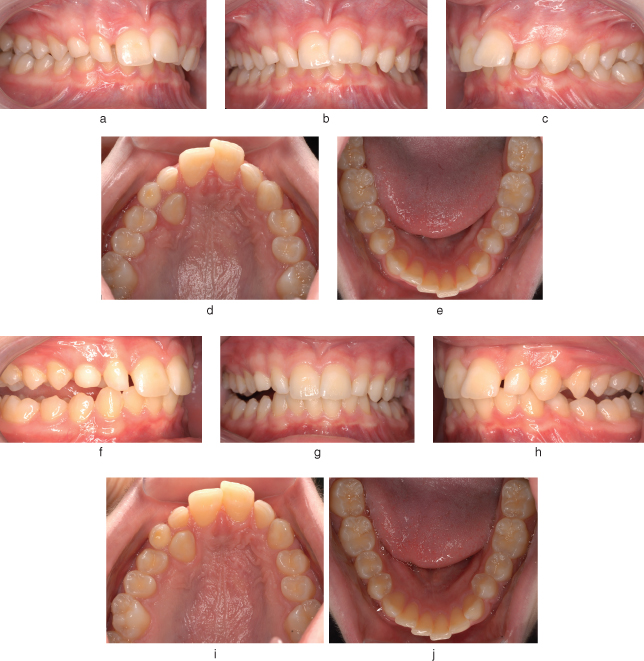 Figure 10.2 Pre-treatment (a and b) and post-treatment (c and d) extra-oral views of the same patient as in Figure 10.1, treated for 6 months with a functional appliance. Note that there has been less correction of the Class II skeletal discrepancy than there has of the Class II malocclusion (Figure 10.1). There has been a beneficial post-treatment increase in lower anterior face height and a reduction in depth of the labio-mental fold. 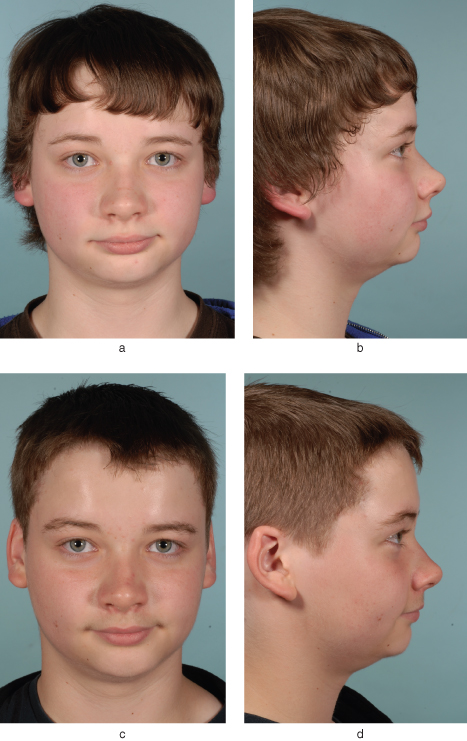 This appliance was introduced by William J. Clark, a specialist orthodontic practitioner working in Scotland, in the 1980s (Clark, 1982). In the last 30 years it has become the most popular functional appliance to be used by orthodontists in the world. Its popularity has arisen due to the perceived ease of wear of this appliance, which comes as separate upper and lower blocks worn as a pair (twin blocks), compared to the more traditional functional appliances, which are fabricated as a single appliance (monobloc).

Since its introduction, there have been a number of designs and modifications of the Twin Block, but one of the most frequently used designs is described below.

Figure 10.3 Laboratory prescription for a Twin Block appliance to reduce the overjet and correct the Class II molar relationship. 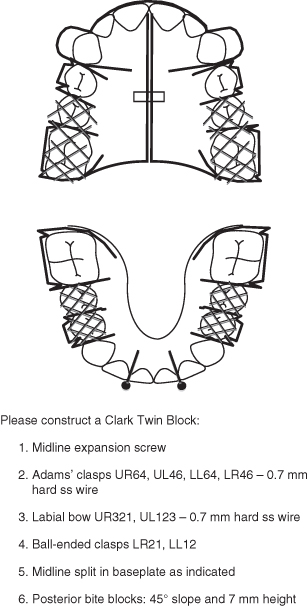 Figure 10.4 Intra-oral views (a–c) of a Twin Block in situ; prescription as indicated in Figure 10.3. Note the 45° slope of the upper and lower posterior biteblocks (arrowed in a and c) as they interlock to keep the mandible in a postured position.

Retention is provided by the Adams’ clasps, ball-ended clasps and labial bow. However, if the upper incisors are excessively proclined and spaced, the labial bow can be converted into an active component (see Chapter 4). The midline expansion screw is included as posterior crossbites are often induced as the man­dible is positioned more anteriorly and the wider posterior part of the lower arch comes to occlude with the narrower anterior part of the upper arch.

The ‘active’ part of the Twin Block appli­ance is the acrylic blocks. These were originally designed with a 45° slope on the anterior of the upper block and the posterior of the lower block. As the patient postures forward, the slope on the blocks causes them to interlock, keeping the mandible in the postured position.

If the second permanent molars are erupted, then it is essential to place occlusal stops over these teeth to prevent them from over-erupting. If unerupted, they should be incorporated as soon as they erupt.

Assuming high-quality impressions, the most important record to collect in order to construct a Twin Block, or any other functional appliance, is the postured bite registration. Although there are a number of different ways of doing this, the principles remain the same:

The postured bite may be recorded with either a softened horse-shoe of bite-registration wax at the required thickness or a ProJet® bite-fork, following the manufacturer’s instructions.

All the principles discussed in Chapter 4 are pertinent to the fitting of functional appliances: checking the appliance before fitting; the advice that should be given to the patient prior to fitting; the way in which the fit of the appliance is checked by the operator, and the adjustments required to increase the retention of the appliance. It is assumed that the reader is already familiar with the content of Chapter 4.

The upper part of the Twin Block should be fitted first, and then removed whilst the lower part of the Twin Block is fitted. Once both parts are fitting well and are retentive, they should both be placed in the patient’s mouth, upper first followed by the lower, and the patient should be advised to posture the mandible forward until the lower block slides up in front of the upper block and is held in this postured position. The patient should be advised that this is the position that they must always bite in when the appliance is in place, because otherwise the appliance will not work. It helps to provide lots of positive encouragement by showing the patient and the parent that, in the postured position, the top teeth no longer stick out and it is easier to get the lower lip in front of them.

The generic advice for the wear of removable appliances detailed in Chapter 4 applies to functional appliances as well, although with some additional information: