10 The thoracic wall and diaphragm

10
The thoracic wall and diaphragm

All vertebrae have the following general configuration as shown in Figure 10.1A:

• A heart-shaped body with two backward projections, the pedicles, either side of the vertebral foramen. The foramen forms the spinal canal with the foramina of other vertebrae. Note in Figure 10.1C that the pedicles are slightly shallow above and strongly grooved below to form intervertebral foramina with adjacent vertebrae for the passage of spinal nerves;

• Two flat plates called laminae which join to form a long spinous process—you can feel the tips of the spinous processes very easily under the skin in the midline of your back;

The thoracic vertebrae are modified from this basic pattern to articulate with the ribs through several more articular facets as shown in Figure 10.1 A, B, and C. They carry on each side: 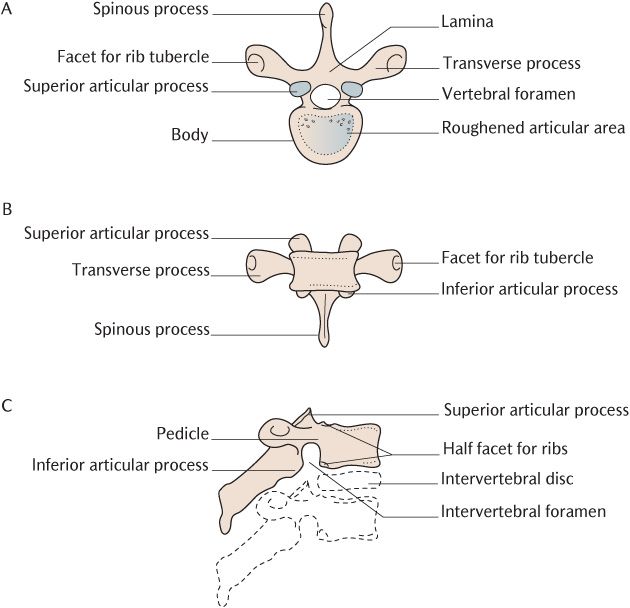 Sometimes forces generated are so great that the nucleus of the intervertebral disc herniates through the annulus; this is a slipped disc and is most usually in the lumbar region of the vertebral column. The herniated nucleus may compress the spinal cord and inhibit nerve transmission; the body would be paralysed and anaesthetic below the level of compression. More commonly, the herniated nucleus extrudes laterally and impinges on the spinal nerve that exits at that level on that side, causing pain to radiate down the distribution of the nerve. With increasing age, the nucleus becomes thinner and less aqueous and is eventually converted to fibrocartilage; some degree of mobility in the vertebral column is lost as these age changes occur.

A typical rib has the following features shown from above and anteriorly in Figure 10.2A and B respectively. Most of the length of the rib is formed by the shaft which is convex externally. The superior border is rounded whereas the inferior border is sharp; these features are best seen in Figure 10.2B. The sharp lower border is the lateral edge of the costal groove on the medial surface, a shallow groove running along the lower border that houses the intercostal artery, vein, and nerve. The radius of curvature of the shaft decreases at the angle, seen best in Figure 10.2A. In Figure 10.2A, observe the tubercle, a posterior projecting elevation just medial to the angle. It has a small facet which articulates with the transverse process of a vertebra; this feature is absent from ribs 11 and 12. The stout neck connects the tubercle and the head which carries superior and inferior facets that articulate with the bodies of the vertebrae as shown in Figure 2.6B; note that ribs 1, 10, 11, and 12 have only one facet. The first rib is very atypical; it is described in Box 10.2 for those who require such detail.

Each rib is continued anteriorly by a costal cartilage that articulates either directly or indirectly with the sternum anteriorly. 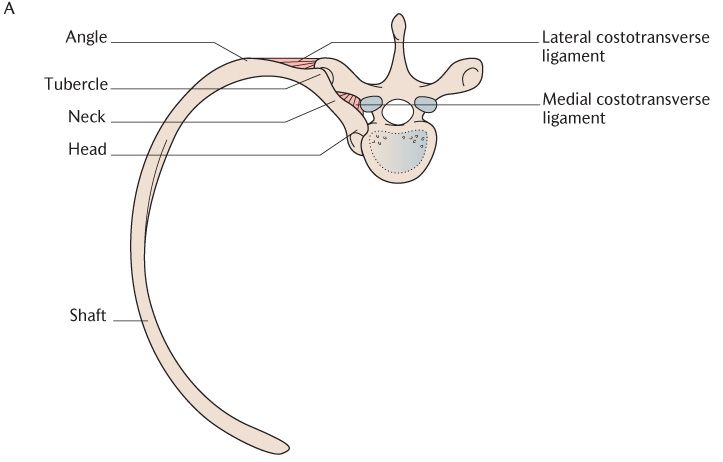 Fig. 10.2 The articulations between a rib and vertebrae. A) Superior view. B) Anterior views.

The first rib is atypical as you can see in Figure 10.3; it is flattened from above downwards and is shorter and more curved than any other rib. It shows prominent rough areas on its upper surface where the scalene muscles, arising from the cervical vertebrae, attach to it. The first rib is often grooved between the muscle attachments by the roots of the brachial plexus and the subclavian artery. A similar marking may be made by the subclavian vein in front of the attachment of scalenus anterior.

Fig. 10.3 The first rib and structures related to it.

As illustrated in Figure 10.2, each rib has several articulations.

• The major articulation of the head of each rib with the vertebrae is seen best in Figure 10.2B. The inferior facet on the head of each of ribs 2–9 articulates with the superior demi-facet on the body of the corresponding vertebra. The superior facet articulates with the inferior demi-facet of the vertebra above and with the intervertebral disc between them. The heads of ribs 1, 10 (usually), 11, and 12 have a rounded head with a single articular facet that articulates only with the corresponding vertebra. These joints are all synovial.

• As seen in Figure 10.2A, the tubercles of the first ten ribs form synovial joints with the facets of the transverse processes of the corresponding vertebrae. Strong costotransverse ligaments unite each rib and vertebra.

The double articulation of each rib with the bodies of two vertebrae and the transverse process of its corresponding vertebra and the relative positions of these attachments means that the ribs twist on their articulations rather than slide up and down (see Section 11.4)

10.1.3
Only gold members can continue reading. Log In or Register to continue