The previous chapters have dealt with casting alloys and casting techniques. Casting, however, is not the only way in which metals can be shaped. An alternative approach is to use cold working, in which the metal is hammered, drawn or bent into shape at temperatures well below the recrystallization temperature of the metal, often at room temperature. Metal or alloy structures produced in this way are said to have a wrought structure and often rely for their special properties on the work hardening which takes place during shaping.

Examples of the use of wrought alloys in dentistry include materials for making instruments and burs, wires, and occasionally, denture bases. Steel and stainless steel are the most widely used wrought alloys and are therefore worthy of some detailed discussion.

Steel is an alloy of iron and carbon in which the carbon content is less than 2%. Greater quantities of carbon produce a very brittle alloy which is unsuitable for cold working. In the solid state, steel is able to adopt a variety of structures depending on the carbon content and temperature. Above 723°C an interstitial solid solution of carbon in a face-centred cubic iron matrix is formed. This solid solution, termed austenite, is unstable below 723°C (the critical temperature) and the face-centred cubic iron matrix breaks down to form two phases. One phase consists of a very dilute solid solution of carbon in iron (up to 0.02% C), called ferrite. The other phase is a specific compound of iron and carbon with formula Fe3C, called cementite. The mixture of ferrite and cementite is termed pearlite. These transitions are illustrated in the iron-carbon phase diagram given in Fig. 10.1.

Steel can be further hardened by heat treatment. If an alloy is heated to a temperature above the critical temperature but below the solidus temperature it forms an austenitic solid solution as shown in Fig. 10.1. If the alloy is then quenched there is insufficient time for the alloy to undergo the transition from the austenitic structure to the pearlite structure. Instead, a very hard and brittle steel, called martensite, which has a distorted body-centered cubic lattice, is formed. Martensite is too brittle for most applications but its brittleness can be reduced by using a low temperature heat treatment, called tempering. The alloy is heated to a temperature in the range 200–400°C, at which martensite partially converts to ferrite and cementite. The degree of conversion depends on the tempering temperature and the tempering time. Thus, the hardness and brittleness can be controlled quite accurately by choosing suitable heat treatment conditions. The process of heat treatment hardening and tempering is illustrated in Fig. 10.2.

Fig. 10.1 The iron–carbon phase diagram (up to 2% carbon), slightly simplified for clarity. 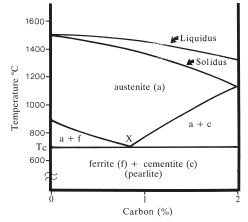 Fig. 10.2 Diagram illustrating the hardening and tempering cycle of heat treatments which can be used on steel.

The ability to be hardened by heat treatments is one of the major advantages of steel. Probably its main disadvantage is its susceptibility to corrosion.

In addition to iron and carbon the stainless steels contain chromium which improves corrosion resistance. This is achieved by the passivating effect in which the chromium exposed at the surface of the alloy is readily oxidized to form a tenacious surface film of chromic oxide. This film resists further attack from aqueous media thus preventing corrosion. Nickel is also present in many stainless steels. It contributes towards corrosion resistance and helps to strengthen the alloy.

The addition of chromium and nickel to steel causes the critical temperature (Tc) (see Fig. 10.1) to be lowered. If sufficient quantities of these two metals are incorporated, the austenitic structure remains even at room temperature. One of the most commonly used stainless steels contains 18% chromium and 8% nickel (termed 18/8 stainless steel). This alloy has a critical temperature below the point at which atomic movements are possible and is therefore sometimes referred to as austenitic stainless steel. It is not possible to harden these stainless steels by heat treatment because the solid–solid transitions occur below the temperature at which atomic diffusions are possible. Hence, 18/8 stainless steels are used in applications where heat hardening is not necessary, for example, for noncutting instruments, wires and occasionally as denture bases. These applications involve a degree of cold working since the alloy is shaped by either bending, drawing or />