Basaloid salivary gland tumors are a relatively uncommon group of neoplasms that are morphologically similar but are clinically distinct. They are formed of crowded ovoid cells with a high nuclear cytoplasmic ratio and are devoid of chondromyxoid matrix. They include basal cell adenoma, basal cell adenocarcinoma, solid variant of adenoid cystic carcinoma, cellular pleomorphic adenoma, and other neoplasms.

Basal cell adenoma, together with canalicular adenoma, formerly were called “monomorphic adenomas,” and are benign salivary tumors. They represent less than 2 % of all salivary neoplasms. Canalicular adenoma is a distinct entity and will not be considered further.

Basal cell adenoma first was described by Kliensasser and Klein in 1967. It presents commonly in the parotid gland (75%) as a well-circumscribed encapsulated lesion with or without cystic change.

The tumor develops from the salivary gland ducts and shows both basal and luminal cell differentiation. Depending on the differentiation and the amount of hyaline matrix, the tumor shows mixture of one of the following histological patterns: (1) trabecular subtype, when solid cords and insular growth of combined luminal and outer basal cells predominate; (2) tubular subtype, when these cords open up with the formation of lumen and slits that may be filled with mucin; (3) solid subtype, when solid nests of basal cells with peripheral palisading predominate; and (4) membranous subtype, when a large amount of hyaline matrix deposits in and around the epithelial nests in the latter (3) variant. The membranous subtype is observed frequently in cases of familial autosomal dominant cylindromas—Brooke-Spiegler syndrome, a syndrome caused by abnormality in CYLD, a tumor suppressor gene located on chromosome 16. The role of this gene remains to be explored in the rest of basal cell and other basaloid tumors. The hyaline matrix is present also in the other subtypes but to a lesser degree. The luminal cells occasionally may show squamoid differentiation, a feature that is often helpful in the diagnostic work-up.

Cytologic diagnosis of basal cell adenoma is challenging and often ends up as descriptive rather than specific. First, it is generally very difficult to differentiate basal cell adenoma from that of basal adenocarcinoma because the latter often presents with bland cytology. Second, it is similarly challenging to differentiate basal neoplasms from solid variants of adenoid cystic carcinoma. In general, the aspirate from basal cell adenoma shows a scant to very cellular smear, and when cystic changes predominate, the specimen may be inadequate The main cytologic features are epithelial cell clusters, rare isolated intact single cells, numerous naked nuclei, and connective tissue fragments. There is an absence of fibrilar chondromyxoid matrix and hyaline cells, cells with abundant plasmacytoid cytoplasm—two features often seen in pleomorphic adenoma. The cell groups are tightly packed and may show peripheral palisading, whorling, luminal formations, and linear arrangements. In large clusters, focal squamous metaplasia with keratinous debris or lumen with mucin may be present. Connective tissue fragments are hyaline or fibrous, without chondromyxoid metaplasia. Red-magenta globules and/or a thick band of hyaline afibrilar material with smooth margins can be demonstrated best with May–Grünwald–Giemsa (MGG) stain (Figures 10.1a–d). This material may surround a large insular nest of predominantly basal cells as in the solid subtype or bound small angulated clusters of cells in the tubulo-trabecular subtype forming a smooth margin. The central part of the epithelial island may show empty spaces with an anastomosing pattern and/or squamous metaplasia (Figure 10.1e–f). 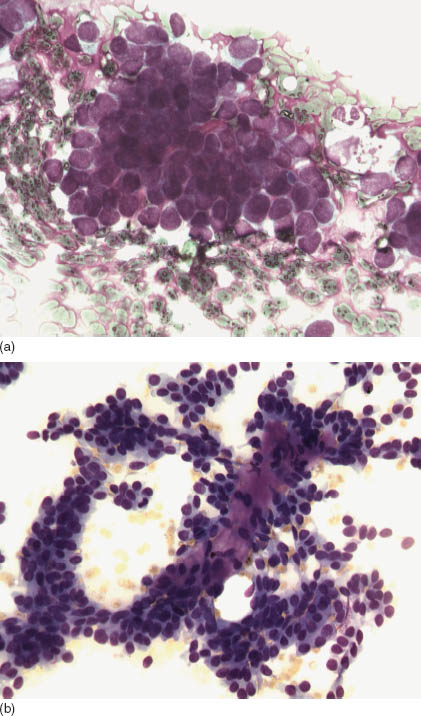 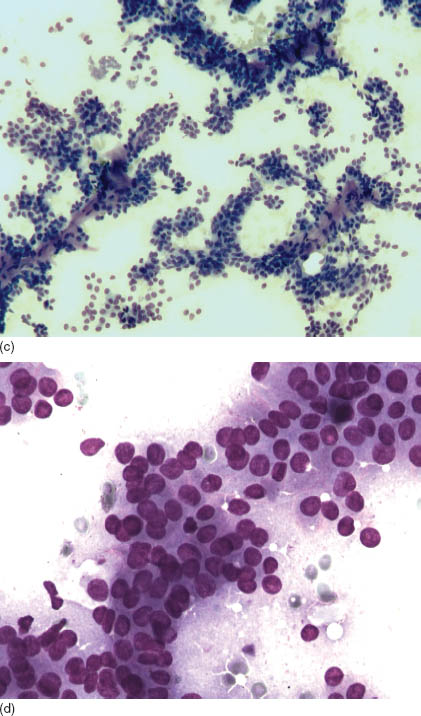 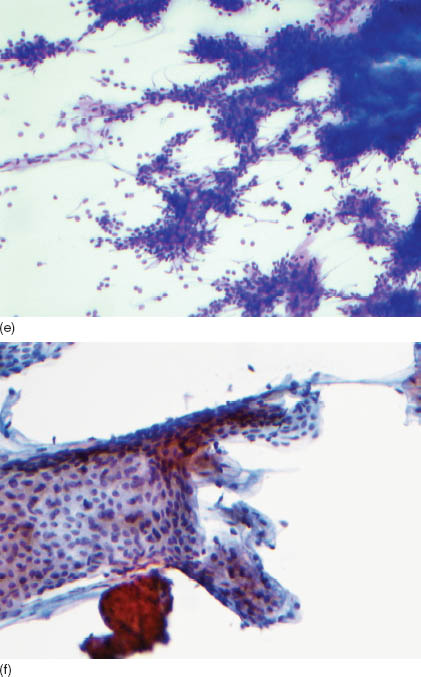 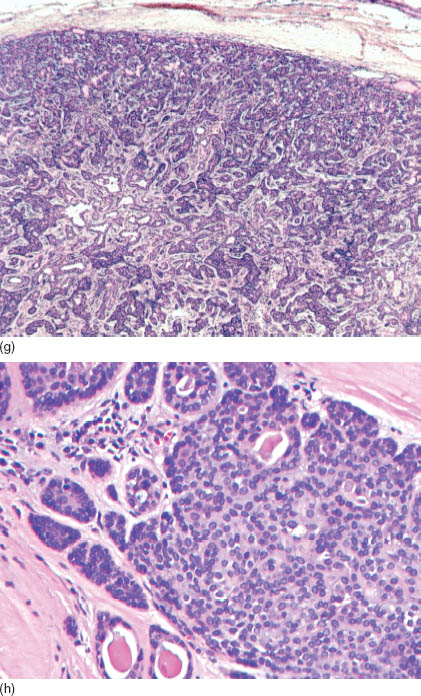 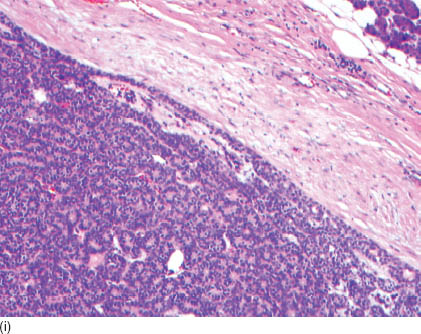 The individual cells are small to intermediate in size. Characteristically, there are two types of cells, a classical basaloid cell and a comparatively larger luminal cell, which has more abundant cytoplasm than the former. There is no nuclear atypia, mitosis, or necrosis (Figure 10.1g). Nuclei are rather ovoid than elongated with the shorter diameter on average less than 5.1 μm (less than one red cell diameter). Characteristically, the chromatin is fine and evenly distributed, and the nucleoli are inconspicuous. These nuclear features are particularly prominent in an ultra-fast Papanicolaou stain, which helps in distinguishing basal cell adenoma from other mimics. Naked nuclei are numerous and identical to nuclei from the epithelial cells. Table 10.1 summarizes the key cellular diagnostic features. The histological sections vary but lack necrosis, frequent mitosis, and significant atypia (Figures 10.1g–i).

10.2.4 Treatment of Choice and Prognosis

Because of its benign behavior, surgical removal with complete free margins is an optimal treatment method. Some basal cell adenomas, especially “membranous subtype,” have a tendency to recur. Some investigators believe that it may represent a precursor for carcinoma. However, it is possible that some of these recurring lesions might have been missed cases of solid variants of adenoid cystic carcinoma or might represent the multicentric nature of memberanous basal adenoma especially in the background of Brooke-Spiegler syndrome.

Basal cell adenocarcinoma is a malignant counterpart of basal cell adenoma. It represents approximately 1% of all salivary neoplasms.

Basal cell adenocarcinoma occurs in young adults and in older patients. There is no sex predilection, and this tumor occurs exclusively in the major salivary glands.

Basal cell adenocarcinoma is similar to basal cell adenoma and may be divided into solid, trabecular, tubular, and membranous variants. Its distinction as a malignancy is based on the presence of mitotic figures, necrotic areas, and/or the presence of infiltration into the adjacent tissues. Cells are small, round ovoid or elongated with a characteristic peripheral palisading. Nuclei are regular, elongated, and with conspicous nucleoli. The tumor may show squamous metaplasia or hyaline int/>