1: History and Development of Dental Implants

History and Development of Dental Implants

The aim of this chapter is to familiarise the reader with the history and development of dental implants and with relevant terminology and implant characteristics.

After reading this chapter the reader should have an understanding of dental implants, their design and characteristics and the various components that are used in implant dentistry.

Tooth loss as a result of disease, trauma, failure to develop and the adverse consequence of partial dentures is common. It is not surprising, therefore, that the history of tooth replacement has been long and multifaceted. Depending on the degree of edentulism, several treatment options are available, including:

The management of edentulism poses a challenge to the practitioner. Evidence from ancient civilisations has shown throughout history that man has tried to replace missing and lost teeth with various materials, including carved ivory, wood and bone. At times, natural teeth were extracted from paupers and casualties of war to replace missing teeth in the wealthy.

It was not until the 19th century that experiments using different materials and designs of appliances to replace missing teeth were reported in the dental literature. Attempted replacements ranged from the use of root-form gold implants placed into sockets to iridium-platinum basket-type endosteal implants with screws.

Before the 1950s implant placement was more of an art form than a science. It was not until the late 1970s/early 1980s that the use of dental implants became more scientific and implantology was recognised by the academic community.

The two main research groups responsible for the underpinning science were Brånemark and co-workers in the late 1960s, and Schroeder and co-workers in the mid-1970s. Both research groups established that direct contact exists between bone and dental titanium implants and that this contact results in the clinical stability of an implant during loading. For this mode of anchorage, Brånemark and co-workers coined the term “osseointegration” in 1967. Osseointegration is the direct structural and functional connection between ordered living bone and the surface of a load-carrying implant.

Osseointegration heralded a fundamental scientific shift in thinking, previous implants having tended to develop a fibrous attachment that, it was hoped, could serve the same purpose as the periodontal ligament. The periodontal ligament is a specialised structure that serves as an effective attachment mechanism, a shock absorber and a sensory organ. Furthermore, the periodontal ligament is capable of mediating bone remodelling, allowing tooth movement. Previous non-integrating forms of implants may have been anchored to bone by means of a surrounding sheath of pseudo periodontal ligament, but this fibrous sheath was a poorly differentiated layer of scar tissue. In most cases, loading and gradual widening of this led to loosening of the implant and subsequent implant failure (Fig 1-1). 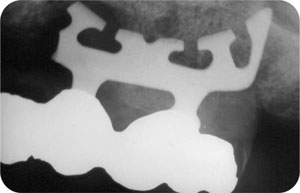 There are three types of implants available:

This type of implant consists of a non-osteointegrated framework that rests on the surface bone of the mandible or maxilla. The framework is positioned beneath the mucosa with, typically, a number of posts penetrating the mucosa to support an overdenture.

Subperiosteal implants were originally introduced in the 1940s and served patients well for many years. Unfortunately, problems experienced included infection, exteriorisation by the downgrowth of epithelium and damage to the underlying bone. In some cases the subperiosteal implant would submerge into the bone, making it extremely difficult to remove (Fig 1-2). 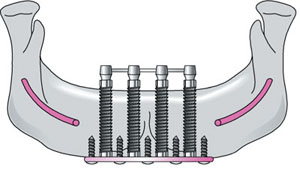 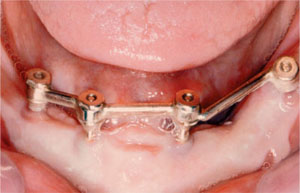 These implants can be placed in the maxilla or mandible through an intraoral incision in the mucoperiosteum. The shapes and construction of endosseous implants have varied over the years, but the past two decades have seen the most dynamic developments. The clinician may be bewildered by the variety of implant shapes and designs available. However, various groups have developed certain criteria that aid the selection of implant systems. For example, Albrektsson and co-workers (1986) proposed the following criteria for a successful implant:

Osseointegration is a union between bone and the implant surface. It can be measured histologically as the proportion of the total implant surface that is in direct contact with bone. Different levels of bone contact may occur with implants of different materials. There are a number of factors that may influence the degree of osseointegration, relating to one of three parameters:

Most contemporary dental implants are made of commercially pure titanium, which has been shown to have excellent biocompatibility. Titanium is a light metal. When exposed to air, a surface oxide is rapidly formed. This layer of oxide determines the biological response. Commercially pure titanium is also highly resistant to corrosion. Other metals have been used for osseointegration, including zirconium, gold and titanium-aluminium-vanadium alloys. These alloys may strengthen the implant but have been shown to have relatively poor bone-to-implant />