Due to its limited success in curing obstructive sleep apnea/hypopnea syndrome (OSAHS),1 many adjunctive procedures and modifications were proposed after the introduction of the classic uvulopalatopharyngoplasty (UPPP) by Fujita et al. in 1981.2 Its role as part of a comprehensive treatment plan remains, however, solidly accepted in most situations in which the palate, with or without the tonsils, is contributing to airway turbulence and obstruction. The goal of UPPP is to widen the airspace in three areas:

1. the retropalatal space;
2. the space between tongue base and palate;
3. the lateral dimensions.

This is accomplished through two components: (a) the palatoplasty component, which involves palatal shortening with closure of mucosal incisions; and (b) the pharyngoplasty component, which is composed of a classic tonsillectomy with pharyngeal closure. These goals, however, are not always achieved with classic UPPP and, in spite of our best efforts, patients may end up with an extremely narrow palatal arch in which the diameter of the oropharyngeal inlet is decreased due to a forward approximation of the posterior palatal mucosa. The resulting new shape of the free edge of the palate is triangular, rather than square. Further contraction of the wound occurs due to scarring secondary to the resection of the posterior tonsillar pillars, and additional narrowing is caused, which further affects long-term results (Fig. 33.1)3 (see also Chapter 32: Submucosal Uvulopalatopharyngoplasty). Additionally, patients who previously underwent tonsillectomy are particularly poor candidates for classic UPPP due to scarring or absence of the posterior pillar from the previous tonsillectomy. These patients have an already narrowed space between the soft palate and the posterior pharyngeal wall and often do not have any redundant pharyngeal folds. Important modifications of the classic UPPP proposed by Fairbanks, in which the posterior pillar is advanced lateral cephalad in order to widen the retropalatal space,4 are, hence, not possible. It is well known that when UPPP fails, the severity of obstruction may actually worsen.5 It became apparent that appropriate selection criteria needed to be implemented in order to identify the patients with a higher likelihood of cure after UPPP. A staging system introduced by Friedman et al.6 identified that patients with anatomic stage I disease (Friedman Tongue Position (FTP) I and II) with large tonsils have a better than 80% chance of success, whereas patients with stage II and III disease (FTP III and IV) are less than ideal candidates and should therefore undergo a combined procedure that addresses both the palate and the hypopharynx. The zetapalatopharyngoplasty (ZPP) technique was developed as a more aggressive technique for patients with stage II and III disease. This includes all patients who have had previous tonsillectomy, as well as patients with small tonsils and those with unfavorable tongue positions. A modification, useful for revision UPPP, is presented in Chapter 62. 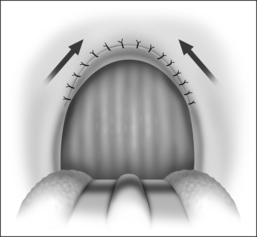 Fig. 33.1 After traditional UPPP, an anteriomedially directed pull eventually causes narrowing of the pharyngeal airway at the midline.

The goal of ZPP is to widen the space between the palate and the posterior pharyngeal wall, between the palate and the tongue base and to either maintain or even widen the lateral dimensions of the pharynx. This is accomplished by changing the scar contracture tension line to an anterolateral vector and by widening the anteroposterior and lateral oropharyngeal air spaces at the level of the palate. By splitting the soft palate and retracting it anterolaterally, an effective anterolateral pull is created, which actually continues to widen the airway as healing and contracture occur (Fig. 33.2). None of the palatal musculature is resected, in spite of the aggressive palatal shortening, thereby addressing and minimizing the risk for permanent velopharyngeal insufficiency (VPI). This procedure is performed with adjunctive tongue base reduction by radiofrequency (TBRF), which addresses the hypopharyngeal airway. 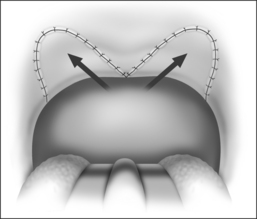 Fig. 33.2 After ZPP, the anterolateral direction of pull on the soft palate widens the retropharyngeal space.

General guidelines for surgical intervention include significant symptoms of snoring and daytime somnolence, documented failure of a continuous positive airway pressure (CPAP) trial, documented failure of conservative measures such as dental appliances, changes in sleeping position and sleep hygiene in general. Apparent obstruction at the level of the soft palate must be determined by fiberoptic nasopharyngolaryngoscopy and Mueller maneuver, or sleep endoscopy. Adequate medical clearance and a thorough review of the procedure, its implications, potential outcomes and complications with the patient are essential components of the preoperative work-up.

Specific criteria for ZPP include patients classified as stage II and III according to Friedman’s Anatomic Staging System7 (see also Chapter 16). Because ZPP produces a significant widening of the retropalatal space, it is an aggressive procedure, with significant temporary VPI and the risk for permanent VPI. It should be reserved for patients with moderate to severe OSAHS with moderate to severe symptoms. It is not a surgical option for snoring only.

Candidates eligible to undergo a modified uvulopalato­pharyngoplasty technique can be divided into patients with intact tonsils and patients status post tonsillectomy. The revision UPPP technique is outlined in Chapter 62.

The key main goals of ZPP are the removal of the anterior mucosa only and the splitting of the soft palate in the midline. The key features are the cutting of the palatoglossus muscle, and the sewing of the posterior palatal mucosa to the anterior resection margin, which retracts the midline anterolaterally and widens the retropharyngeal area.

The surgical technique for the modified ZPP is illustrated in Figures 33.3 to 33.10. 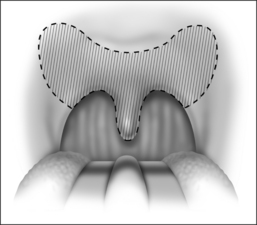 Fig. 33.3 Outline of the palatal flaps, marked before incision.