Uvulopalatopharyngoplasty – effects on the airway

Chapter 30 Uvulopalatopharyngoplasty – effects on the airway

Uvulopalatopharyngoplasty (UPPP) was first described by Fujita in 1981. It represented the first surgical procedure specifically designed to treat obstructive sleep apnea (OSA).1 Fujita modified an earlier procedure applied by Ikematsu as a treatment for snoring.

UPPP enlarges the retropalatal airway by excision of the tonsils (if not previously extirpated), trimming and reorienting the posterior and anterior tonsillar pillars, and excising the uvula and posterior portion of the soft palate (Fig. 30.1). A number of modifications of Fujita’s procedure were described shortly after his publication, but none has clearly improved outcome, nor become the predominant technique.2 However, more recent modifications seem promising: UPPP with creation of a uvulopalatal flap in lieu of extirpation of the uvula and posterior soft palate;3 tonsil reduction by coblation (rather than tonsillectomy) combined with a palatal flap technique.4 Different surgical tools can be applied to achieve UPPP, such as electrocautery vs. scalpel.5 UPPP can include tonsillectomy, but can also be performed in a patient previously tonsillectomized.6 A procedure described as lateral pharyngoplasty focuses on splinting the lateral pharyngeal walls through microdissection of the superior pharyngeal constrictor muscles within the tonsillar fossa, sectioning this muscle, and suturing the laterally based 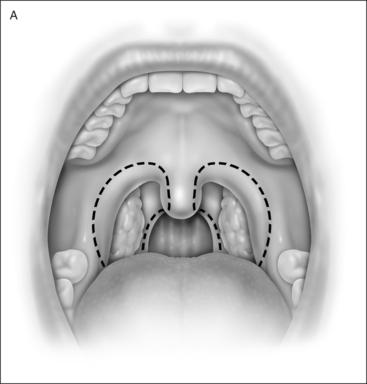 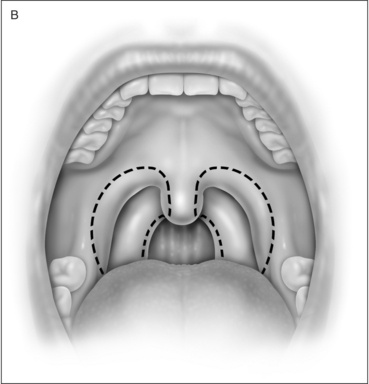 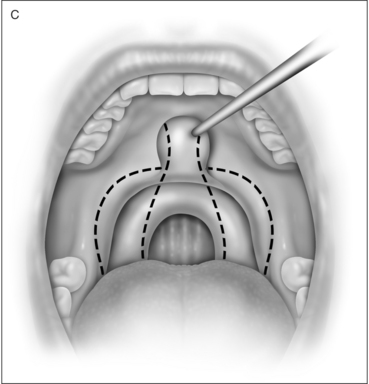 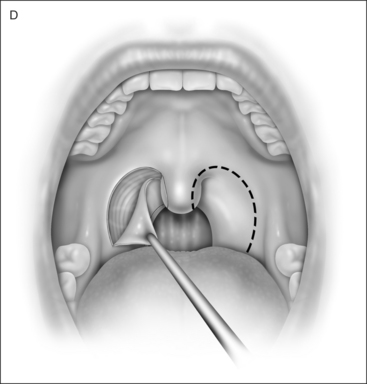 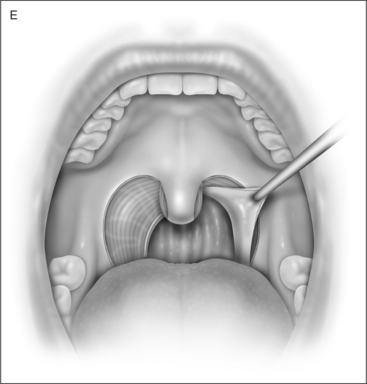 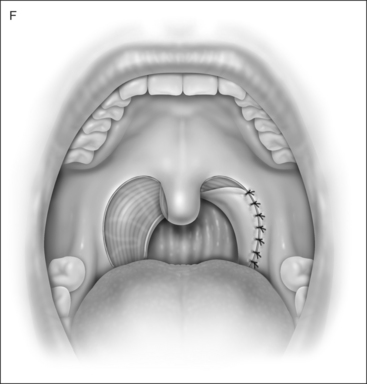 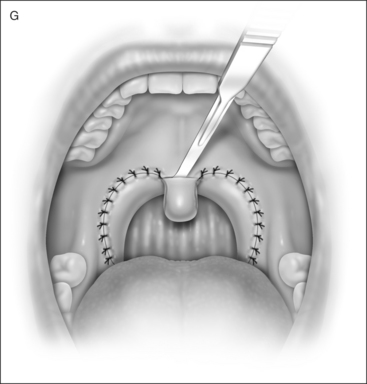 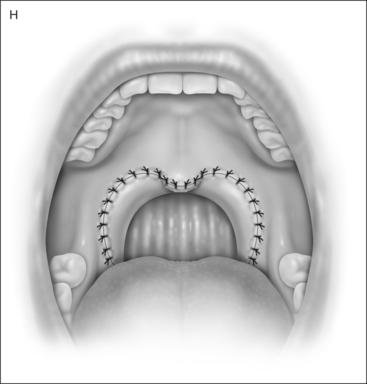 flap consisting of that muscle to the same side palatoglossus muscle. A palatopharyngeal Z-plasty is performed to prevent retropalatal collapse.7,8 Laser-assisted uvulopalatoplasty (LAUP) is performed with laser, under topical and local anesthesia, without tonsillectomy. Though it may (in some cases) be applied in treatment for OSA, particularly in previously tonsillectomized patients, LAUP is not generally included among the surgical armamentaria for OSA, but rather for snoring.9

3 WHY DOES UPPP WORK?

Structurally, the dorsum of the tongue is anterior to the soft palate. The dorsum of the tongue may push the anterior wall of the soft palate posteriorly during obstructive events (maintaining closure of the retropalatal airway). Depending upon specifics of pharyngeal anatomy, there is dynamic interaction between the tongue and soft palate during obstructive apnea, reflecting an abnormally highly collapsible airway at the retropalatal level.10 A model of the upper airway in OSA syndrome (OSAS) likens it to a simple collapsible tube. The tendency of the upper airway to collapse can be expressed quantitatively in terms of a critical pressure (Pcrit), defined as the pressure surrounding the focus of collapse. If atmospheric pressure is designated zero, then airway collapse will occur whenever Pcrit is a positive number (indicating that it is higher than atmospheric pressure). Pcrit levels are higher during sleep than during wakefulness in both normal individuals and OSAS patients. In normals, Pcrit rises from awake values that are more negative than −41 cm H2O to values in sleep of −13 cm H2O.11–13 This means that, in normals, atmospheric pressure is greater than Pcrit even during sleep and the pharynx will not collapse. In OSAS patients, the spectrum of awake values of Pcrit is −40 cm H2O to −17 cm H2O and Pcrit during sleep is +2.5 cm H2O.11,12,14,15 Although the pharyngeal airway of awake OSAS patients tends to be more collapsible than that of awake normals, Pcrit does not cross the critical line of zero (i.e. atmospheric pressure) except when the individual with OSAS has sleep onset, at which time an obstructive event results.11 Patients who have varying degrees of partial pharyngeal collapse have intermediate, but negative, levels of Pcrit during sleep: −6.5 cm H2O for asymptomatic snorers and −1.6 cm H2O for patients with hypopneas but no apneas.11,15 In general, Pcrit must be below −5 cm H2O to eliminate obstructive sleep disordered breathing.11 Pcrit for an OSAS patient can, alternatively, be defined as the lowest level of nasal continuous positive airway pressure (CPAP) at which airflow is maintained.16 Examples of the decrement in Pcrit that can be achieved by non-surgical interventions are −6 cm H2O through loss of 15% of body weight; −3 to −4 cm H2O through protriptyline treatment; and −4 to −5 cm H2O through the avoidance of sleeping in the supine position.11 Pcrit decrement resulting from upper airway surgery has been documented for UPPP. When 13 patients undergo UPPP, Pcrit decreases from a level of 0 to a level of –3 cm H2O (P=0.016). In those patients who have greater than 50% decrease in Respiratory Disturbance Index (RDI) in non-REM sleep, Pcrit decreases from −1 to −7 cm H2O (P=0.01). The degree of improvement in sleep disordered breathing is correlated significantly with the change of Pcrit (P=0.001), and the decrease in RDI is determined by the magnitude of the drop in Pcrit rather than by the initial level of Pcrit. No significant change in Pcrit is detected in non-responders.16,17 In a study performed under anesthesia and induced paralysis, 18 patients were analyzed for retropalatal pharyngeal closing pressure before and 3 months and 1 year after UPPP. UPPP decreased retropalatal airway closing pressure by 3.5 cm H2O. A direct correlation existed between the severity of OSA and retropalatal airway closing pressure. Patients who failed at UPPP had postoperative retropalatal airway closing pressure greater than zero. Reduced retropalatal airway collapsibility was maintained up to 1 year after UPPP.10,18

4 WHY DOES UPPP FAIL TO CORRECT OSAS, AND WHY DO SALVAGE PROCEDURES WORK?

The likely explanation is that upper airway collapsibility has been inadequately addressed. The degree of improvement in severity of OSAS is correlated significantly with the change in Pcrit (P=0.001). The decrease in RDI is determined by the magnitude of the fall in Pcrit. No significant change in Pcrit is detected in non-responders. UPPP failures reveal retropalatal airway closing pressure greater than zero.10,16–18 Alternative (not mutually exclusive) explanations for UPPP failure are: (1) UPPP does not address all sites of narrowing or collapse; or (2) UPPP addresses sites of narrowing or collapse in an inadequate manner. Evidence for these explanations has been documented through application of upper airway manometry, measurement of pharyngeal cross-sectional area, videoendoscopy, and cephalometry.19–22 Further evidence comes from clinical experience. Surgical modification of the upper airway at sites other than those addressed by UPPP may salvage UPPP failures. Thus, procedures believed to diminish collapsibility of the retrolingual airway (unlike UPPP which addresses primarily the retropalatal airway) may achieve surgical salvage after UPPP failure. These procedures include: mandibular advancement, laser midline glossectomy, lingualplasty, radiofrequency tongue base ablation, genioglossal advancement and hyoid myotomy and suspension. Maxillomandibular advancement enlarges the retropalatal and retrolingual airway and may achieve surgical salvage after failure of various combinations of UPPP and the other procedures outlined above.16,23 On the other hand, additional surgical modification of the palate (addressing the retropalatal airway, as does UPPP) also salvages UPPP failures. Transpalatal advancement pharyngoplasty (TPAP) increases the retropalatal airway size by excising posterior hard palate and advancing the soft palate. Sequential performance of TPAP after UPPP results in incremental decrease in Pcrit to a level below that resulting from UPPP alone. When four patients underwent TPAP after previous UPPP, mean post-UPPP Pcrit of 5 was decreased to –4 after TPAP (P<0.01). TPAP increased the post-UPPP retropalatal airway cross-sectional area from 30 to 95 cm2 (P<0.01).24 Other studies have demonstrated that the degree of improvement in OSAS is correlated significantly with the change of Pcrit (P=0.001), and the decrease in RDI is determined by the magnitude of the fall in Pcrit.13 It is likely that each surgical procedure successfully decreasing OSAS severity results in decreased Pcrit, and that procedures performed concomitantly or in sequence (at a single or at multiple sites of airway narrowing/collapse) result in incremental decreases in Pcrit. Further data are needed for confirmation.11