Use of Pendulum with Lingual Appliances

(1)
Department of Orthodontics, Maimonides University, Buenos Aires, Argentina
The normalization of the anteroposterior position of the upper first molars is one of the most important challenges for orthodontists.
Different choices had been presented in the literature. Among them, the use of a pendulum as a “noncompliance” appliance especially in adolescents and adults is recommendable (Harfin and Ureña 2010).
The design allows orthodontists not only to normalize the position but also to correct the rotation and the transversal dimension in the posterior region.
It was described by Hilgers in 1992, and some years later, a new model with a palatal expansion screw to correct the transversal width was suggested (Hilgers 1983, 1992).
It is one of the non-extraction treatment modalities that don’t require patient cooperation with acceptable esthetics and comfort.
A large acrylic button is used as an anchor component in combination with a 0.036″ TMA springs that produce a light continuous force against the molars. Four stainless steel arms are bonded with composite on the occlusal surfaces of the first and second bicuspids (Fig. 5.1a, b).

Fig. 5.1
(a, b) Different pendulum models with two and four springs
By opening the horizontal loop, buccal or distal uprighting forces are created producing a bodily movement of the molars (Byloff and Darendeliler 1997a; Joseph and Butchard 2000).
When the second molar is present, a double spring is suggested.
The amount and frequency of the activation is related to the treatment objectives.
Dr. Hilgers suggests beginning with an activation of 90° of the TMA springs, but experience has demonstrated that a 45° activation of the molar spring is highly recommendable to achieve the distalization of the whole molar thus avoiding the distal inclination of the crown. Only two or three activations are mostly necessary to achieve the desired results.
The springs can produce about 5–6 mm of distal movement in 4–5 months (Byloff and Darendeliler 1997b).
When the molars are in the desired position, the SS wire retention arm on the second bicuspid should be cut.
In general, they drift distally in 2 or 3 months, and in some cases, a bracket with a partial arch is used. The same procedure is used for the first premolar.
Another important issue is how to maintain the position of the molars. A modified Nance button appliance with a transpalatal bar is suggested.
It is crucial that it be cemented the same day the pendulum is removed (Fig. 5.2) (Bennet and Hilgers 1999; Geron et al. 2004). 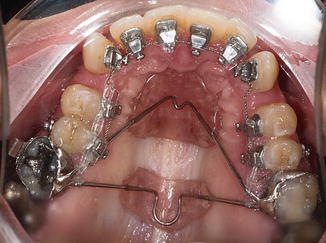 Fig. 5.2
A modified Nance button appliance with a transpalatal bar to maintain the molar position
A complete distalization of the bicuspids has to be completed before the pendulum is removed.
For the retrusion of the anterior teeth, a 0.016″ × 0.022″ SS archwire is used with a figure-of-eight ligature from canine to canine and an elastic chain from the hook of the canine to a loop of the appliance or to the second molar.
In very few cases, some protrusion of the incisors is observed as a side effect (Bussik and McNamara 2000). More control during the activation period is necessary to avoid this problem. Until now, no undesirable third molar impaction was observed.

The following 28-year-old patient is a clear example. His chief complaint was the position of the upper lateral incisors, especially the right one.
He used some type of removable appliance when he was 8–11 years old.
Besides the position of the upper lateral incisors, an important overbite was present in combination with the retroinclination of the central incisors. The gingival line and the occlusal plane were not parallel, and an important gummy smile was present on the central incisor level (Fig. 5.3a, b).

Fig. 5.3
(a, b) Pretreatment front and smile photographs
A complete Class II molar and canine were observed on the lateral views. The retroinclination of the central incisors was evident. The oral hygiene was normal. No TMD symptoms were present (Fig. 5.4a, b).

Fig. 5.5
(a, b) Upper and lower arcades before orthodontic treatment
Since the panoramic Rx was taken in occlusion, the extrusion of the lower incisors was clearly visible. The left lower third molar was mesioinclined (Fig. 5.6a).
The lateral Rx confirmed the significant overbite. The interincisal angle (156°), the convexity (+6.5 mm), and the posterior facial height (73.5°) were increased (Fig. 5.6b).

Fig. 5.6
(a, b) Panoramic Rx in occlusion and lateral radiograph at the beginning of the treatment
The position of the upper incisor was +0.77 mm with 12° of inclination and the lower incisor was −4 mm and 13°.
Treatment Objectives
1.
Align and level the arches.
2.
Achieve Class I canine and molar.
3.
Normalize overjet and overbite.
4.
Improve esthetics.
5.
Maintain or improve periodontal health.
6.
Achieve long-term stability.
After analyzing different alternatives and taking into consideration that the patient didn’t want orthognathic surgery nor extraction of the first bicuspids, a pendulum appliance was placed to normalize the position of the first and second upper molars.
This is the situation 2 and 4 months after the pendulum was bonded. A central screw was added to control the upper arch width. Only two activations were needed to distalize the molars (Fig. 5.7a, b).

Fig. 5.7
(a, b) Results after 2 and 4 months in treatment
After the second bicuspids were distalized, the pendulum was removed, and the brackets on the first bicuspid were bonded to initiate their distalization. Other brackets on the labial side of the second bicuspids were added in conjunction with a 0.016″ × 0.022″ partial archwire to control anchorage (Fig. 5.8a, b).

Fig. 5.8
(a, b) Different stages of the bicuspid distalization
When the first bicuspids were totally distalized, all the anterior brackets were bonded and a low load deflection arch was placed (0.014″ SS).
The position of the lateral and central incisors was almost corrected, and a figure-of-eight ligature was placed to improve their position (Fig. 5.9a, b).

Fig. 5.9
(a, b) Front and occlusal view with all the anterior brackets in place and a 0.014″ SS archwire
The lateral views confirmed that the molars were in Class I as well as the bicuspids. Buttons on the labial surface of the molars were bonded for the use of Class II elastics (Fig. 5.10a, b).

Tags: Achieving Clinical Success in Lingual Orthodontics
Oct 16, 2015 | Posted by mrzezo in Orthodontics | Comments Off on Use of Pendulum with Lingual Appliances
Premium Wordpress Themes by UFO Themes
WordPress theme by UFO themes