(1)
Department of Orthodontics, Maimonides University, Buenos Aires, Argentina
The treatment of open bite malocclusions is one of the most challenging.
Normally, patients with this type of malocclusion have a dolichofacial pattern in combination with speech difficulties and in biting and chewing food. Also, they have a lack of anterior guidance, posterior crossbite in the molar areas, narrow maxillary arch, increased lower anterior face, excessive development of the maxilla, and a short mandibular ramus height that could be aggravated with tongue interposition at rest and function.
When this situation is present in nongrowing patients, a combination of a skeletal and dentoalveolar problem is noticeable (Geron and Chaushu 2002; Geron et al. 2004, 2013). Soft tissue evaluation plays an important role in the design of the treatment plan and treatment objectives. Its relation with problems like snoring and apnea is well established.
Unfortunately, there isn’t only one treatment strategy to treat all the nongrowing open bite patients with a special bracket or wire, but using brackets with long hooks can help normalize tongue posture (7th Generation Ormco).
Different treatment biomechanics have been suggested, taking into account the age of the patient, facial biotype, amount of periodontal attachment, number of teeth, habits, etc. (Kuroda et al. 2007; Park and Kim 2010).
Normally, open bite is always accompanied with tongue thrusting, mouth breathing, incompetent lips, or finger sucking habit. The correction of these habits is fundamental to maintain the achieved results; otherwise, relapse is inevitable (Justus 2001).
After bonding the brackets, the patient is instructed to position the tongue behind the brackets, during the whole treatment.
Different treatment alternatives will be discussed to correct this malocclusion.
The help of the speech pathologist is imperative. They are also instructed to use anterior light elastics every night to control the anterior tongue posture.
It is important to remember that the soft palate plays an important role in regulating the airflow through the nose and mouth.
The retention protocol is essential during a long period of time and has to be individualized for each patient (Huang 2002; Shapiro 2002). Functional appliances can help when habits and/or abnormal functions have to be controlled (Teittinen et al. 2012).

This 22-year-old patient was worried about the relapse of his open bite, 3 years after he finished his orthodontic treatment.
At this moment, no respiratory or allergic problems were present.
His tonsils had been removed when he was 7 years old (Fig. 4.1a, b).

Fig. 4.1
(a, b) Pretreatment front and upper occlusal photographs. The relapse is clear
The position and the inclination of the occlusal plane are important when the treatment objectives are planned.
The labial protrusion of the upper incisors was evident with Class I molar and almost Class I canine (Fig. 4.2a, b).

Fig. 4.3
(a, b) Initial panoramic and lateral radiograph
In order to align and extrude the upper incisors in a secure way, a 0.016″ TMA wire has to be bent in the anterior part between the right and left canine insets. An activation every 6 weeks is advisable.
Extra torque built into the anterior lingual bracket position can help to tip the incisors lingually and reinforce extrusion to correct the anterior open bite (Fig. 4.4a, b).

Fig. 4.4
(a, b) 0.016″ TMA wire with an occlusal bend between the upper canines
When overjet and overbite are almost normal, clear buttons are bonded to the upper and lower canines and first bicuspids’ labial surfaces for vertical rubber bands, used in order to improve canine guidance (Fig. 4.5a, b).

Fig. 4.5
(a, b) Clear buttons were bonded on the labial side for rubber band elastics
These are the results 20 months after treatment. Midlines are centered and a flat occlusal plane is normalized. An upper fixed retainer is in place for a long period of time. Continuous control with the speech pathologist is advisable (Fig. 4.6a, b).

Fig. 4.6
(a, b) At the end of the treatment, a fixed retention wire is advisable for a long time
The comparison of the pre- and postlateral radiographs clearly demonstrated the improvement of anterior occlusion, the leveling of the occlusal plane, and the normalization of the overjet and overbite (Fig. 4.7a, b). 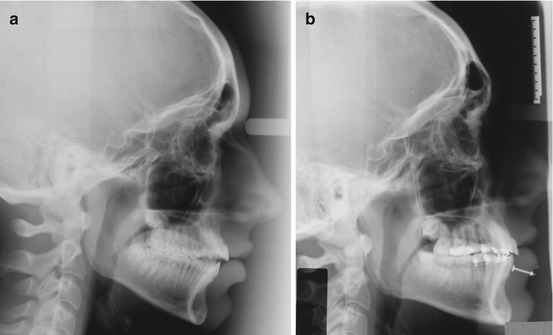 Fig. 4.7
(a, b) Comparison of pre- and postlateral radiographs

This 34-year-old patient was sent to the orthodontic department for esthetic and functional reasons.
Her chief complaint was her midline deviation and the lack of occlusion in the anterior segment. She received orthodontic treatment when she was 10–12 and 18–21 years old.
The gingival line is not parallel to the occlusal plane, and upper mild crowding was present (discrepancy −5 mm). Unesthetic posterior restorations were visible (Fig. 4.8a, b).

Fig. 4.8
(a, b) Pretreatment front and occlusal photographs
The lateral photographs confirmed an important crossbite in the posterior segment and the open bite in the anterior region with peg-shaped lateral incisors (Fig. 4.9a, b).

Fig. 4.10
(a, b) Pretreatment panoramic and lateral radiographs
Treatment Objectives
1.
Align and level the arches.
2.
Normalize overjet and overbite.
3.
Improve central midlines.
4.
Align occlusal plane.
5.
Improve gingivo-periodontal tissues.
6.
Long-term stability.
A nonextraction treatment in the upper arch was decided in spite of the fact she had a severe dolichofacial pattern with an important anterior open bite.
To achieve Class I canine and normalize the midline, the extraction of the lower right first bicuspid was suggested.
The first step was to align and level the upper arch. Lingual brackets (7th generation Ormco Corporation) were bonded from upper second right molar to the second left molar with a Respond wire (0.0175″) for 3 months (Fig. 4.11a, b).

Fig. 4.12
(a, b) Upper and lower arches at the end of Phase I
Lateral views 1 week after the right lower first bicuspid extraction were done. Bands on the first and second molars were placed to enhance anchorage control (Fig. 4.13a, b).