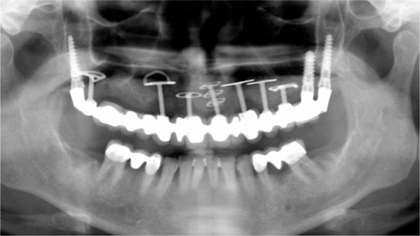 Fig. 7.2.
Maxillary restoration supported by multiple implants. The distal abutments consist of tuberosity and pterygoid screws, while BOI implants were used in the anterior segment in accordance with the available bone width. The BOI implant at 13 was vestibularly folded and adapted to the vestibular surface of the maxilla 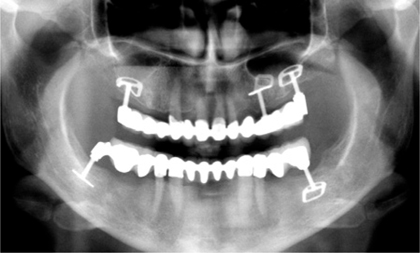 Fig. 7.3.
Canines can offer very good support. They can be used alone or in combination with the first premolar
In situations of advanced resorption, it is no longer possible to differentiate between basal and crestal implantation. The important part is to utilize the cortical bone.

Since the mandible may be subject to heavy torsion, a multi-implant strategy would overly reduce the elasticity of that bone. For this reason, we generally use four to six implants, with one distal implant on each side only. Stable canines can be used instead of an implant.
Today we tend to use no BOI implants with more than one disk in the distal mandible and prefer to put no implants at the premolar positions to ensure that the elasticity of the mandible is not overly reduced and that no high point is created in the middle of the horizontal part of this bone. Triple- and double-disk BOI implants can be used to good effect along the anterior block of the mandible.
In the maxilla, BOI implants may be combined with natural abutments in virtually any combination, as long as the teeth are stable enough to offer long-term resistance to the forces acting on it. When considering a tooth as part of a larger bridge, it should be considered that overall masticatory forces will increase. 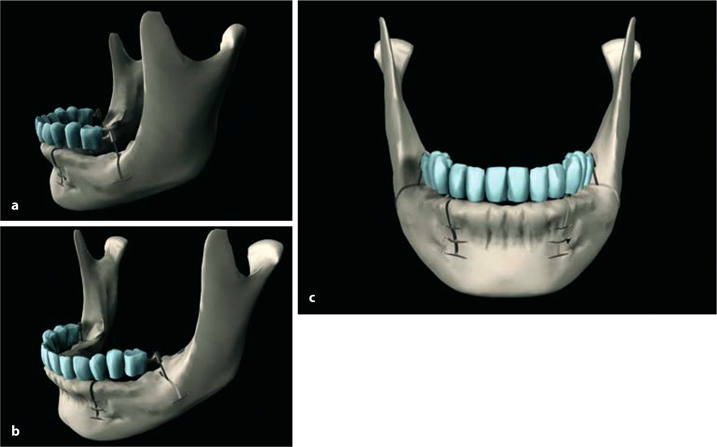 7.3 Which Jaw Should be Restored First?

Concerning the issue which jaw should be restored first, we have developed the following approach in our clinic: if therapeutic modifications are needed in both jaws, the mandible should be treated first if possible. There are several reasons:
Similar results were reported by Lindquist and Carlsson (1982), who observed that the ability to eat eight out of ten types of foods that the patients had previously been unable to eat was restored after inserting a mandibular restoration supported by enossal implants. Chewing function was significantly improved once these restorations were in place. In patients on a limited budget, a cost-benefit analysis will therefore definitely argue in favour of providing an implant-based solution in the mandible rather than the maxilla. This strategy will be effective in the majority of patients and will often render additional treatment of the maxilla redundant. According to Lindquist and Carlsson, implant treatment of the maxilla is only necessary in specific cases. We feel that this view needs to be put into perspective, as considerable progress has been made with implant treatment in the maxilla since 1982. With today’s BOI technology, implant-supported fixed restorations have become just as affordable, successful and simple to realize in the maxilla as they have been in the mandible all along.
Treating the mandible first makes sense from a functional viewpoint as well. Tallgren et al. (1986) demonstrated that the changes in masticatory function brought about by inserting immediate dentures in the mandible can be reduced if a fixed dentition is at least partially present in the mandible. This conclusion is quite plausible, considering that better muscle orientation is achieved during chewing if reliably positioned teeth are present in at least one jaw.
If a complete denture is present in the maxilla, the necessary elevation of the occlusal plane towards Camper’s plane can be performed more readily than in the presence of a fixed restoration or of elongated natural teeth. In spite of that, the occlusal plane should always be equalized if necessary. Trying to save money on this aspect of treatment will be counterproductive in the long term.
One also has to keep in mind the fact that the teeth in the mandible often resist imbalanced situations better than the teeth in the maxilla. If in the maxilla large bridges are present, this will sometimes lead to a situation where a patient faces a complete breakdown of the maxillary restoration and dentition with the reason for the brakdown being located in the stronger, but unbalanced and/or unfavourably designed prosthetics in the lower jaw. We strongly recommend in these cases always to treat the lower jaw first or simultaneously, because it is dangerous to rely on the patient’s willingness really to treat the mandible after the problems in the (aesthetically to him/her more important) upper jaw. We have seen sad cases where the patients forgot about the agreement about treatment in the mandible, vanished from the scene (even missing regular check-ups in order not to be reminded about the agreement), and returned later with problems again in the upper jaw.

7.4 When Should the Implants be Loaded?

Obviously, there is no way for implants to remain completely “non-loaded” once they are located within the bone. The appropriate point of time at which all or part of the chewing force should be transmitted through all or some of the BOI implants onto the cortical bone will depend on the conditions present during surgery, the number of implants inserted, and the general circumstances under which mastication takes place. Since the cranial bone is permanently in a state of torsion, there can be no such thing as a “non-loaded” state of implants. We therefore maintain that it is more sensible to define the type and direction of loading via a prosthetic superstructure than to leave the bone without this well-dosed stimulus.
Part of this rationale is to insert the superstructure while excellent primary stability is present. Following this logic, prosthetic loading should take place within the 8–12 days (the sooner, the better). Due care must be exercised in deciding on this strategy, which may be contraindicated in specific cases (i.e. in surgically pre-treated areas). The other alternative would be to load the implants after 6-8 weeks when the phase of bone healing and bone repair has been completed. The implantologist may want to select a different time if numerous abutments are present, provided that the superstructure can then be inserted in a tension-free manner. Such re-scheduling is less advisable in the maxilla than in the mandible with its considerable macrotrajectorial stresses.
Both jaws undergo extensive bone remodelling. If a large number of load-transmitting disks have been inserted, it is unlikely that individual implants are loaded to the point of creating deleterious osteolytic processes. On the downside, little bone will remain for a second treatment attempt if implants become unstable because of other factors.
Essentially, we always attempt to insert as many implants and load-transmitting surfaces in the surgical phase of treatment as are necessary to realize immediate loading. In first implantation procedures, the goal of immediate loading can be achieved almost invariably. A temporary restoration is inserted in the maxilla for 2–12 months, while the mandible can usually be treated with a definitive restoration right away. Temporary restorations may need to be replaced or adjusted inside or outside the mouth several times, particularly in the maxilla, as functional and morphological alterations are developing over the course of treatment and/or extensive chewing-related adjustments have to be performed. On occasion, it may be necessary to compensate for spontaneous repositioning of the TMJs. Such repositioning may only occur after weeks or indeed months and may proceed in a stepwise fashion, reflecting the step-by-step release of spastic contractions of the lateral pterygoid muscle. In those cases, the masticatory surfaces must be redesigned several times, also taking into consideration that the steepness of the cusps must fit the age of the patient. Any delays in readjustment may trigger a unilateral or anterior chewing pattern.