Fig. 17.1.
The dissimilar TMJ positions are clearly visible in the panoramic radiograph
The implantation procedure included five BOI implants in the maxilla and two strategic BOI implants in the mandible (Ihde 2001). Teeth 42–32 were extracted in the same session. Long-term temporary bridges made of veneered castings were inserted within five days of the implantation procedure.
No initial periodontal treatment was performed, since the residual teeth 43 and 33 did not require such treatment. At first, it was absolutely impossible to guide the left TMJ to its retral position, as the repositioning pathway was badly jammed.
The patient was soon asymptomatic after the bridge had been inserted and was able to chew soft food even during the healing phase. Over the next 5 months, the left TMJ was gradually repositioned by slowly reducing the vertical dimension primarily in the left segment. In each of these sessions, the occlusion was adjusted until the patient felt that the mastication pattern was balanced. Within about 2 or 3 weeks of each adjustment, the patient would realize that unilateral premature contacts were present, which were then readjusted accordingly. The long-term temporary bridge was thus significantly reduced over time. It was replaced for the first time when the residual metal structure was finally deemed too thin for the substantial bridge span in the mandible. By that time, the radiographic position of both TMJs was close to optimal and bilaterally balanced.
The treatment plan included concomitant physiotherapy, which the patient did not comply with on a regular basis for prior engagements.

A 59-year-old patient presented with a reduced residual dentition and requested to have a fixed restoration inserted. The clinical evidence for craniomandibular dysfunction included a shifted dental midline, shifted labial frenuli, as well as unilateral chewing including a lateral shift of the mandible and reduced vertical dimension.
The positions of the TMJs are rather symmetrical, and the dental midline has been roughly adjusted by the prosthetic restorations which have unilaterally increased the vertical dimension in the second quadrant. Apparently, this functional restoration has been achieved at the expense of transient overloading in the third quadrant.

Fig. 17.2.
Try-in of the long-term temporary bridge. The TMJs are still located in unphysiological positions. Thin metal structure on the left side of the mandibular bridge eventually prevented the series of occlusal adjustments to be performed on this structure. The image was obtained during try-in with only part of the abutments in place. In addition to the condyle positions, also note the relative positions of the threaded pins in the maxilla and mandible

Fig. 17.3.
The retral TMJ position is only reached after about 5 months. The implant replacing tooth 36 had to be flexed in medial direction after increasingly interfering with the cheek area. The bridge was adjusted; all implants were well osseointegrated by that time. Since the TMJ repositioning reduced tongue movements, the anterior block of the second mandibular structure was tilted in anterior direction. Prior to inserting the second restoration in the lower jaw, it is necessary to consider whether two more implants replacing the lower canines might be useful. Comparative evaluations of this type are only possible by using the same radiological system and the same position of cranio-mandibular structures 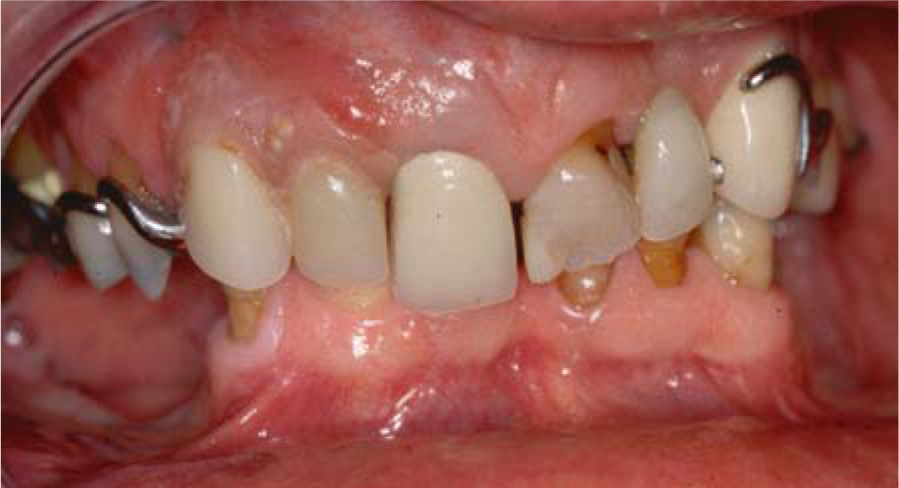 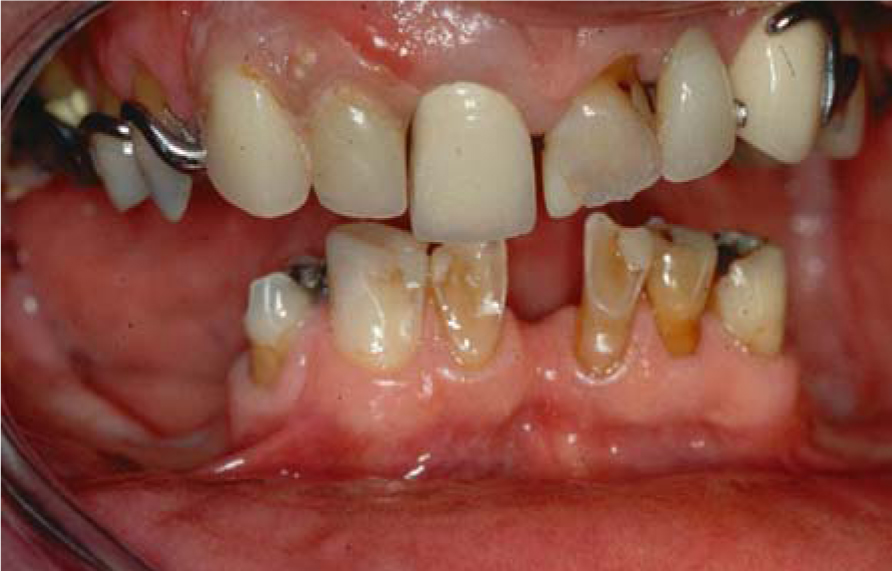 Fig. 17.5.
The midline shift is also evident on mouth opening. The posterior ridge is heavily resorbed. Crestal implants are contraindicated in this situation 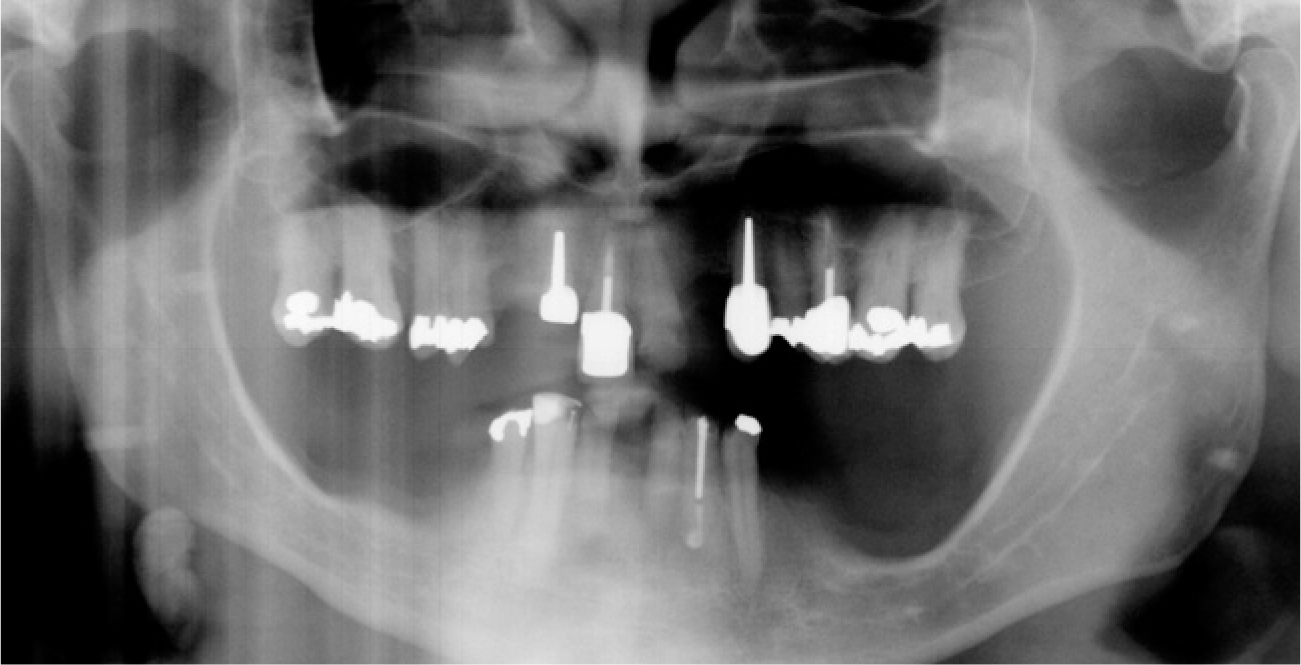 Fig. 17.6.
Preoperative OPG. Ridge resorption in the posterior segment of the mandible is strikingly advanced. The left ramus of the mandible is affected more severely and is caudally elongated. The OPG shows a typical case of Class II/2 occlusal relations. In addition to the midline shift, the TMJs are malpositioned relative to the tubercles and have obtained an unphysiological morphology by functional deformation. A chewing side cannot readily be identified, although it looks as though the left ramus of the mandible is resorbed more severely and mineralized more strongly along the bony crest line. At any rate, the TMJ structures have been traumatized repeatedly in different directions, as apparent from the anterior flattening and apposition of the right and left condyles, respectively
Only gold members can continue reading. Log In or Register to continue