Fig. 16.1.
The basal maxilla in this CT scan is almost round in shape
It is essential that the distal BOI implant and the tuberopterygoid screw are inserted such that they do not interfere with each other. Likewise, establishing the screw connection must not interfere with cementation of anterior bridge segments and vice versa. We like to insert the tuberopterygoid screw before inserting the most distal BOI implant to ensure that the optimal entry point into the bone is still usable. Sometimes the surgeon may misjudge the implant axis and thus fail to incline the drilling path sufficiently in distal direction. The maxillary sinus will soon be reached in that case. Instead of drilling a second channel, it is usually better to start from the already existing aperture and, from there, drill the second channel by using a substantially different inclination. In this way, no apertures will be left postoperatively on the surface of the crest. The cortical bone of the maxillary sinus will normally close very well by itself.
According to Scortecci, tuberopterygoid screws can be over 40 mm long. Screws of such considerable length are only necessary if distances that do not contain any bone have to be covered in crossing the maxillary sinus. Their length may initially obscure their unique nature compared to zygomatic screws, until it is pointed out that the latter have their endpoint in the zygomatic bone rather than the sphenoid bone area. Accordingly, the insertion path of true zygomatic screws is oriented more towards the lateral aspect. Another difference is that zygomatic screws are not usually osseointegrated in the alveolar crest because the basal support area within the zygomatic bone is biomechanically out of sync with the alveolar crest. Because zygomatic screws are only inserted in situations where hardly any bone is left in the alveolar crest, coverage by connective tissue is irrelevant in this area. At least this is true for as long as the maxillary sinus shows no tendency to become recurrently infected; however, this is unlikely to happen due to its high rigidity. On the other hand, it would appear more reasonable from a biological viewpoint to use zygomatic screws with a smooth surface along the crestal segment where they transverse the ridge and sinus – in other words, not to use any surface enlargement or threading in the implant segment close to the mouth. 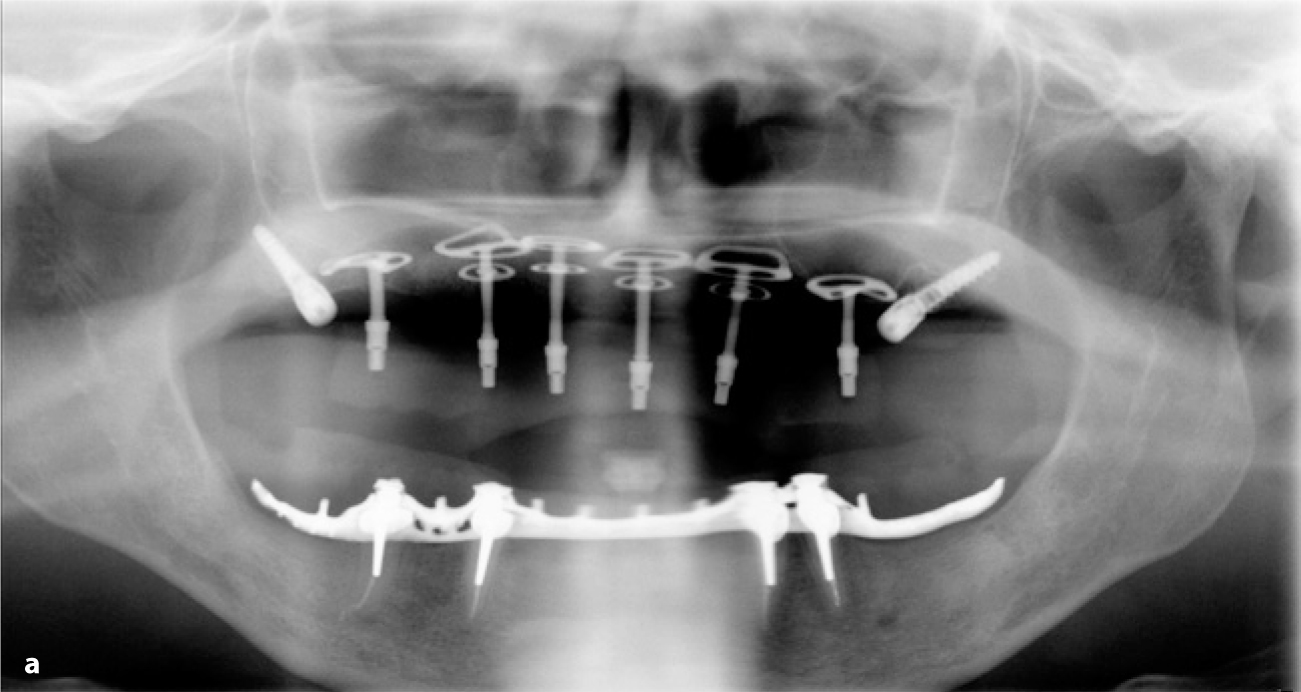 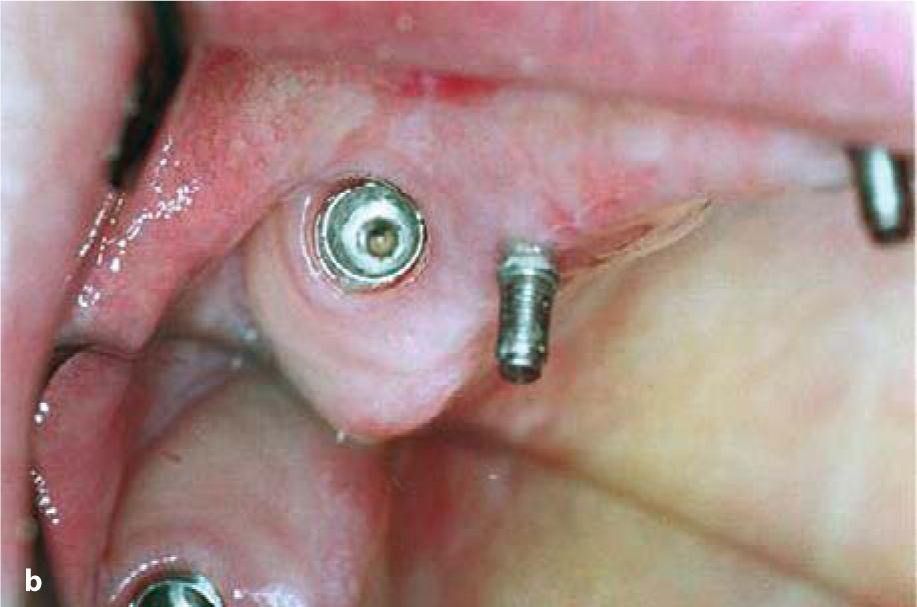 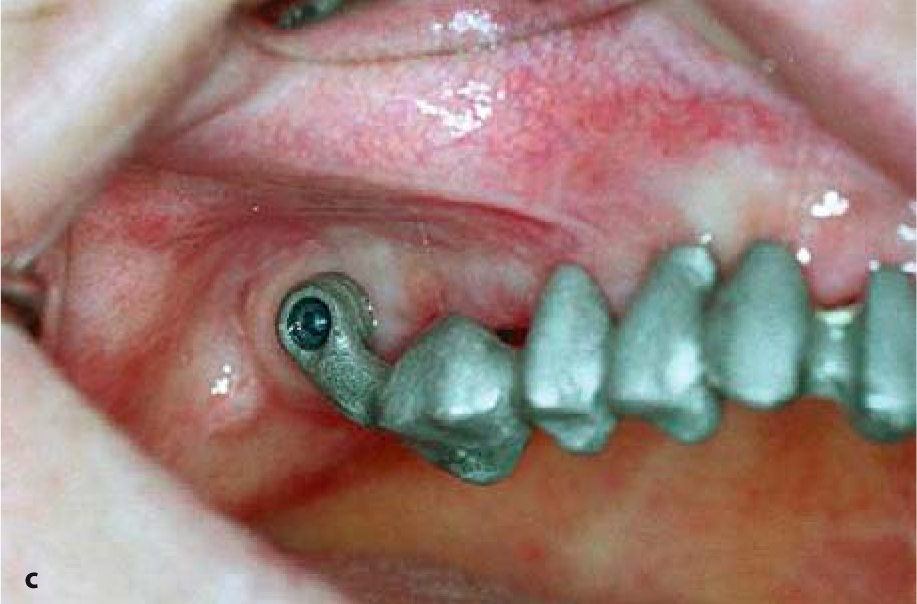 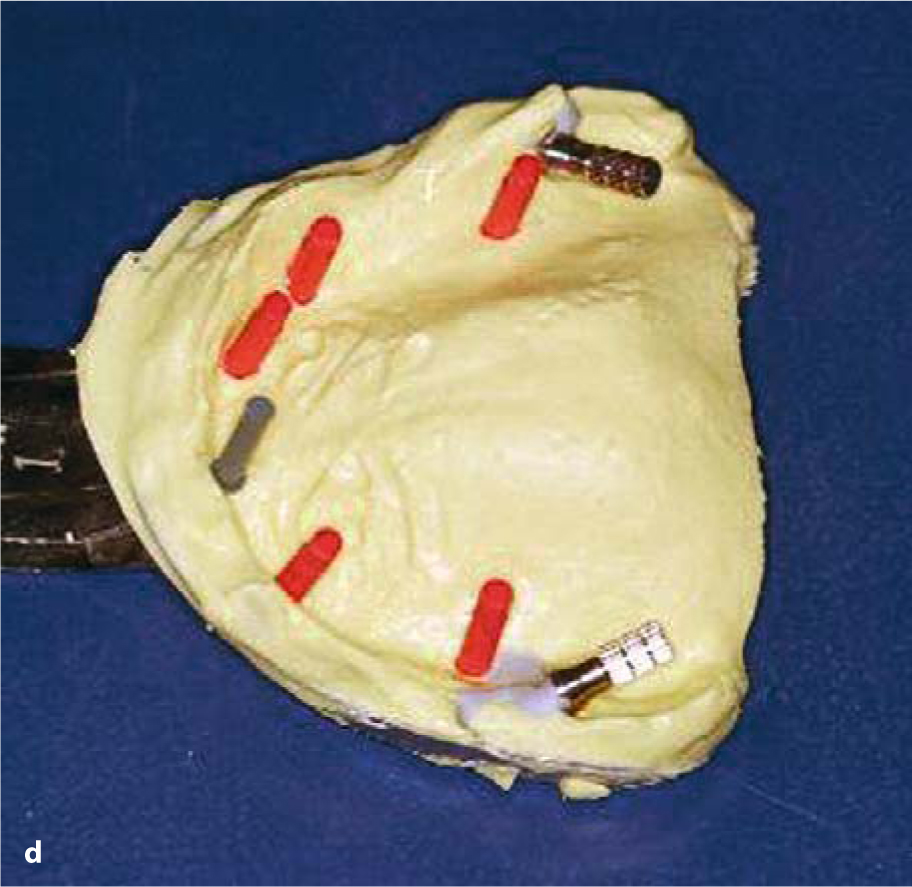 Fig. 16.2a–d.
Maximum utilization of the available bone structure may sometimes mean that tuberopterygoid screws have to be inserted almost horizontally, thus mounting the superstructure via a lateral pathway. It is absolutely necessary to ensure that the screw is clinically accessible to enable impression-taking and mounting of the superstructure
Tuberopterygoid screws can and should osseointegrate along the entire longitudinal surface area. Therefore, surface enlargement by sandblasting is more of an advantage than a disadvantage on these designs. We use cone-shaped STC- or STO- type compression screws for these applications. Scortecci (2001), on the other hand, demonstrates the successful use of non-sandblasted micro-threaded screw-implants with external hexagonal connection.
Only gold members can continue reading. Log In or Register to continue