Fig. 3.1
Peri-implantitis is a risk factor for a number of diseases
Implant–tissue interface formation occurs during the process of wound healing [2, 3]. The oral mucosa is penetrated along the implant surface after the implantation and as a result, peri-implant epithelium is created (Fig. 3.2). Peri-implant epithelium lack the junctional epithelium that are normally formed by hemidesmosomes and the basal lamina, which connect enamel and epithelium of natural tooth [4]. 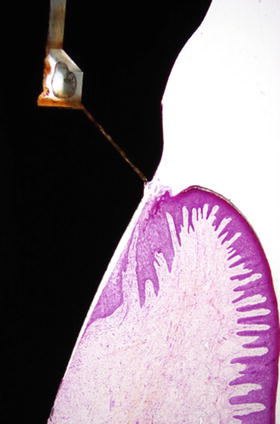 Fig. 3.2
Ground section of the periimplant epithelium
Fibroblast face to the implant surface differentiates into osteoblasts also during the process of wound healing. The osteoblast deposits bone matrix on the implant surface, becomes calcified, and completes osseointegration which is complicatedly associated with the implant materials. It is known that a direct bond between implant and surrounding bone has been demonstrated with implants made of bioactive materials, i.e. bio-glasses and calcium phosphate ceramics [5, 6].
Titanium is known to have a greater ability than other metals to facilitate osseointegration, which is defined as a close contact between bone tissues and implant material such that there is no progressive relative motion of living bone and implant under functional levels and loading for the life of the patient (Fig. 3.3). Even when light microscopy confirms osseointegration of titanium implants, examination by electron microscope reveals that the bone and the implant are not crystallographically continuous (Fig. 3.4). The thin amorphous structures between the bone and the titanium implant, that is, there is no direct contact between titanium and bone was also observed [7]. 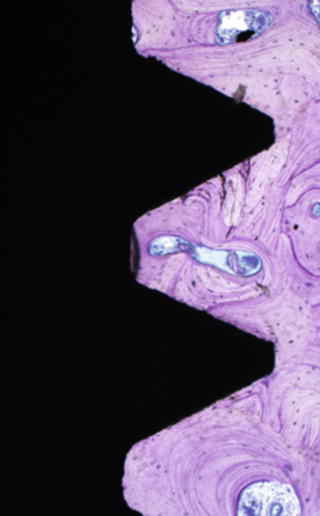 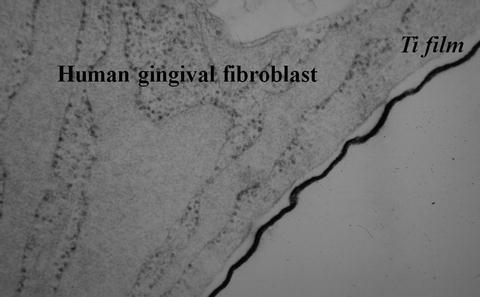 Fig. 3.4
Ultrastructural feature of Human gingival fibroblast titanium film (Ti) interface in vitro
Generation of the titanium oxide film on the surface of titanium is one reason for this ability and its high level of corrosion resistance. In addition, the degree of the deposition of calcium phosphates in body fluid is greater on titanium than on other metals. Presently, adsorption of osteogenic proteins such as osteocalcin (Oc) and osteopontin (Op) to the titanium surface is a main function of the osseointegration of titanium [2, 3]. There are two mechanisms involved in the adsorption of osteogenic proteins. Titanium oxide has a similar number of isoelectric points (pI) at approximately pH = 5 as those of pH = 4.7–4.9 on osteogenic proteins. Accordingly, at around pH 7, both titanium oxide and osteogenic proteins are negatively charged. The calcium ion-mediated mechanism caused by the positively charged calcium ions, Ca2+. The hydration effect of terminal OH radicals which are positively charged, is also considered as playing a role in protein adsorption (Fig. 3.5) [8].

3.2 Effect of the Surface Geometry 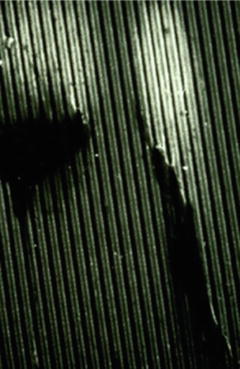 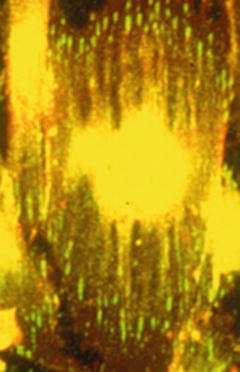 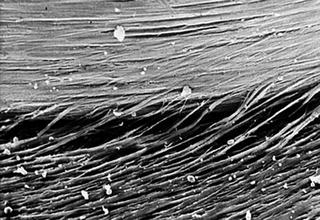 Fig. 3.9
Numerous cellular bridges that extend from the multilayer to the oriented cell sheet and orientated parallet to the grooves (contact guidance) 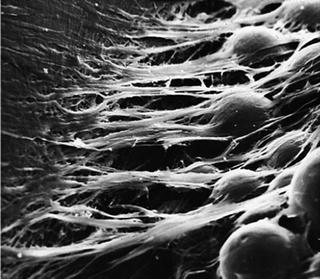 Fig. 3.10
The migration of fibroblasts onto rough surface and numerous cellular bridges oriented at right angle to the rim of the disc (Two center effect)

Surface chemistry involves the adsorption of proteins and cells on biomaterials. This adsorption reflects the affinity between two substances, and the strength of adsorption follows the order: chemical adsorption including covalent bonds and ionic bonds > electrostatic force found in electrokinetic potential or zeta potential > hydrogen bonds involved in hydrophilic groups such as –OH, –COOH, and –NH2 > hydrophobic interaction (i.e., adsorption of hydrophobic substances in water) > van der Waals forces. Adsorption characteristics are primarily evaluated by hydrophobicity (wettability), which can be determined by measuring the surface energy (contact angle), and electrokinetic potential (zeta potential, isoelectric point), which reflects surface electric charges and these affect creation of firm integration between implant and cells.

As for the surface chemistry, methods of modifying the titanium surface using adhesive proteins such as osteonectin, fibronectin or laminin-5 compatible with the soft tissue/implant interface have been proposed. For the implant surface in contact with subepithelial connective tissues, tresyl chloride treatment is used to adhere the selected proteins such as fibronectin to the amino residues [20]. Thus the gingival epithelium attached to dental implants through the formation of hemidesmosomes using laminin-5 [21]. However, a stable coating and prevention of protein denaturation at the time of implantation are necessary using motif-programming or plasma treatment.