Designer Supersurfaces via Bioinspiration and Biomimetics for Dental Materials and Structures

Fig. 11.1
A histological longitudinal slice through a human molar tooth with annotations to highlight surfaces and junctions or interfaces inside and around the tooth organ. (1) Dentine to Periodontal ligament interface; (2) PDL/cementum interface; (3) Cementum/bone junction; (4) Dentine/pulp junction; (5) Gingiva boundary; (6) Enamel boundary; (7) Dentine/enamel junction; (8) Gingiva/enamel interface. Image reproduced from: ​www.​uky.​edu/​~brmacp/​oralhist/​module8/​lab/​imgshtml/​image02.​htm and ​www.​am-medicine.​com/​2013/​12/​an-illustrative-note-powerpoint.​html
In the regenerative sciences precise control of cell proliferation and differentiation is unresolved and therefore remains of considerable future significance. In cell engineering surface structures over large surface areas have been developed to select, maintain, expand and invoke phenotype changes in cell populations with some important successes. Topography at the nanoscale is showing enormous promise as a device to influence cell behaviours in predictable and useful ways for benefits in cell therapy and tissue engineering. Research on surface continues to be a crux in materials dentistry and regenerative dentistry. The major areas would be surfaces for bacteria control and selectivity and surfaces for cell and tissue integration. The basic work on programmed surfaces for cell selection, growth and lineage specification also relate heavily to regenerative dentistry strategies and offer new therapeutic routes. In the next sections of this chapter we hone in on the programmed surfaces with topography for bacteria control, tissue adhesion and biointegration.

Bacterial biofilms are notoriously difficult to eradicate from surfaces such as implants. There are different ways of preventing bacteria adhesion and colonisation. The first most extensively investigated is chemical and molecular engineering of surfaces. In these approaches surfaces are built with adjuncts such as dendrimers, cationic peptides, photoactivation, lysostaphin, deactivators of quorum sensing and grafted antibiotics [15].
In dentistry, there is the added complexity by which the main aim is to selectively control different bacterial populations and not to eradicate everything. The mechanisms of attachment for bacteria are not fully understood. Surface roughness, wettability and surface energy are known to influence bacteria attachment and adhesion most profoundly. The range of limits for these properties has been difficult to measure precisely. Surface roughness above 0.2 μm is known to promote plaque formation. The influence of surface energy properties is complicated by the nature of the bacterial cell wall charge properties. Hydrophobic interactions in bacteria are common since adhesions located on pilli are themselves hydrophobic. According to some evidence acquired in vitro hydrophobic processes drives attachment. However, the greatest task is to unravel the complexities of surface properties and bacteria adhesion in living biological environments. Of greatest prominence is the effect of serum proteins at the surface, which conditions all other biological responses.

The oral cavity is colonised by a whole community of microbes that include bacteria, viruses and fungi. The ecology or interrelationships between the members of the various microbial communities are highly intricate and under constant investigation with new links in the network being uncovered regularly. It is thought that changes in community structure invoke degenerative diseases that cause tissue destruction of dentine, periodontal ligament, gingiva and bone. Once the environment and conditions favour the acceleration of pathogenic growth the disease and tissue destruction is highly likely to occur. Effective ways must be sought to control and eradicate pathogenic microbes from the mouth. A degree of control is often required to reset the community structure of bacteria. There has been voluminous research to effectively kill pathogenic outright. Antibiotics are the most effective altogether. However, there is increasing evolved resistance to antibiotics and the targeted delivery of antibiotics remains imperfect. Other main treatments implement chemical toxins, photodynamic elements and nanoparticles to destroy bacterial biofilms and kill bacteria. There is also renewed interest in prospecting for new antibacterial compounds from sessile invertebrates renowned for the complex defensive chemistry, e.g. Marine sponges and Ascidians. As such there are many examples in nature where evolution has selected for sophisticated adaptations to kill microbes or prevent contact with the organism. A significant adaptation that has emerged is structural devices at surfaces.
Nature has evolved countless interfaces precisely with anti-bacterial defences using specific Nano topographies alone. And this is independent of the effects from chemical secretions. Probably the first application of patterned surfaces of diamond shaped micro-protuberances to hinder bacterial contamination is Sharklet inspired from the micron structure of scales or dermal denticles from shark-skin [16, 17]. The synthetically replicated surface hinders growth of a range of biomedically significant bacteria species such as, Staphylococcus aureus and Escherichia coli [16, 17]. The special nanostructure at the surface are deleterious to Pseudomonas aeruginosa and lead to the shredding of other pathogenic species including: B. catarrhalis, E. coli, P. aeruginosa, and P. fluorescens. Another recently discovered bactericidal surface imported directly from nature is the Cicada wing surface (Fig. 11.2). 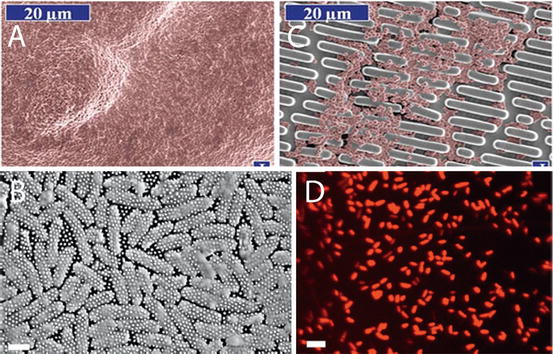 Fig. 11.2
Anti-bacterial and Bactericidal surfaces based on microstructure and nanostructure. (a) Smooth surface covered in bacteria after 2 days; (b) Bacteria colonisation on a patterned microstructure surface translated from shark skin; (c) SEM of “skewered” bacteria; (d) Confocal image showing dead bacteria sitting on top of Cicada nanopillar structure [18]
The structure consists of nanometric pillars 200 nm tall, 100 nm in diameter at the base and 60 nm at the tip spaced 170 nm apart in a highly regular and tight pattern. This precision piece of Nano architecture being ten times smaller than the cell itself punctured settling bacterial cells and killed them with 60 min from attachment (Fig. 11.2). The killing power has been measured for this wing surface and was described as being efficient with 6 × 106 bacterial cells made inoperable in every square centimeter after 30 min [18]. These initial results represent are of supreme usefulness for control of clinical infections anchored onto biomaterial and implant surfaces. However, the topography did not kill gram-positive species of bacteria: B. subtilis, P. maritimus, and S. aureus species of bacteria. Other wing topographies are being actively pursued as potential antibacterial and bactericidal devices. It has been reported that Dragonfly wings Diplacodes bipunctata have strong and rapid bactericidal effects on a broader range of bacteria classes-both gram negative and gram-positive types as well as bacterial spores. A synthetically created surface with the exact same features of densely packed protruding nanospikes as the Dragonfly wing demonstrated the same bactericidal effects. It was estimated that 45,000 bacterial cells every minute in every cm squared were killed. Black silicon is this equivalent and is generated using ion beam technology. This is costly and cannot be transferred onto just any surface and specifically onto the type of materials useful in biomedicine [19].
Surface roughness and structure influences human cells more acutely than bacterial cells. This is because eukaryotic cells have a much more complicated sensory apparatus than prokaryotes. It was first evidenced that human cells can sense, detect and “react” to structures of >5 nm at very small distances of 3–15 nm [20]. Physical attachments between cells and extracellular matrix (ECM) molecules can only be made at such close distance. There is broad remit to harness the sensory apparatus of the cell and influence their behaviour in many important aspects such as, migration, alignment, polarity, differentiation and proliferation. Such governability opens up many biotechnological and therapeutic avenues from tissue regeneration to biosensing.

Material surfaces with higher and more potent capacities to encourage cell attachment are required in a range of biomedical applications. This is achieved by modulating the type of nanostructure and its dimensions. Nanopillars have recently shown a degree of success in selectively adhering cells onto its structure with clear effects on phenotype and proliferation (Fig. 11.3a, b). In many applications adhesion and separation of different cell types is a desirable biological event (Fig. 11.3c). For example in one study nanopillar structures of a specified aspect ratio would favour endothelial cell adhesion while concomitantly preventing adhesion of fibroblastic cells. This duality is ideal for vascular implants in, which endothelial association is needed for coating and the fusion with existing vessels without interference of fibroblasts involved in clotting reactions [4] (Fig. 11.3c). Strong cell attachment on specialised cell adhesive nanotopographies is a vital outcome that can promote tissue formation, remodelling and bonding at the biomaterial surface. 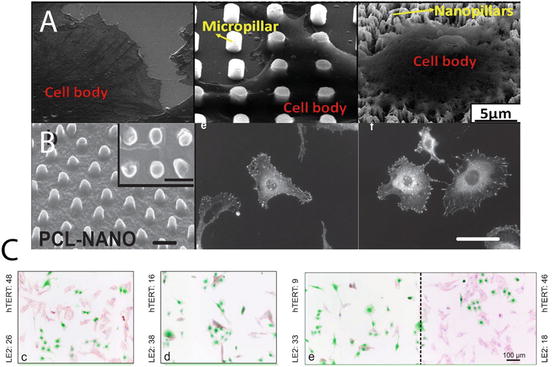 Fig. 11.3
Cell responses to nanopillar topography. Variations are apparent in responses regarding different cell types and dimensions of the nanotopography. (a) MSCs growing on top of nanopillars did not spread and the shape governing stress distribution increased production of osteogenic matrix molecules; (b) Vinculin staining to highlight the focal adhesion portion inside hTERT (fibroblasts) cells at cell periphery on flat and nanopillar array. The low count of focal adhesions on nanopillars decreased proliferation; (c) Co-staining of hTERT and endothelial cells to show the different growth and proliferation responses with increasing pillar size (aspect ratio) from left to right. Endothelial cell growth and proliferation were preferentially selected on the high aspect ratio nanopillar surfaces [4, 5]

Materials with surfaces that can adhere to living tissue and participate in regeneration, development and repair are important. In surgery tough, stretchable and tear resistant tapes able to stick rigidly to tissues would be broadly revolutionary in the treatment of wounds, reducing surgery and complications. Conceivably such a design could be used to replace sutures and staples. Bioglues have been developed as potential candidates for wound closure and sealing. However, they have been dogged by inflammation susceptibility. The reason is that the toughening of these tissue adhesives requires strong chemical reactions to take place, and is the source of biological irritation. Another point is to develop effective glues that bond in wet conditions. In both cases natural ingenuity may offer prospects for success. Adhesives derived from nature may offer a chemistry of bonding which is more favourable to biological systems and less inflammatory. In this vein, analogues (e.g. polydopamine) of the main active ingredient of mussel adhesive proteins, 3,4-dihydroxyphenylalanine (DOPA) have been broadly investigated.
Only gold members can continue reading. Log In or Register to continue